Here, There Be Dragons by James A. Owen | Teen Ink

Here, There Be Dragons by James A. Owen

‘“What is it?” John asked.
The little man blinked and arched an eyebrow.
“It is the world, my boy,” he said. “All the world, in ink and blood, vellum and parchment, leather and hide. It is the world, and it is yours to save or lose.”’

In the first book of The Chronicles of the Imaginarium Geographica, three young men, John, Jack, and Charles are brought together by the murder of John’s mentor. A strange man named Bert entrusts them with a special volume, an atlas that shows not our world but a strange parallel realm of myth and legend. This realm, the Archipelago of Dreams, is under attack by the evil Winter King and his army of Shadow Born who are slowly erasing whole countries from the Imaginarium Geographica, the atlas which is looked after by a series of caretakers who all have a talent with words. J.M. Barrie, Jules Verne, H.G. Wells….The three newest caretakers embark on a journey across the Archipelago to defeat the Winter King and restore the rightful heir to the throne.
While this may sound like any old fantasy story, it is anything but. It is very imaginative, and skilfully combines history with fantasy. The characters are engaging, and the twist at the end left me stunned with pleasant surprise. The classic ‘good vs. bad’ plot did not at all detract from the story. The evil characters were brilliantly evil, and the good characters were heroically good, but mortally flawed. The array of characters in this book all bring their own charm to the story. The plot is appealing, and there is plenty of action balanced with enough information so I wasn’t confused.
James A. Owen proved himself to be a fantastic writer (as well as illustrator, all the illustrations were done by him) and The Chronicles of the Imaginarium Geographica have turned out to be some of the best books I have ever read (I am currently halfway through the latest one, The Shadow Dragons). I would strongly recommend this and the following ones, The Search For the Red Dragon, The Indigo King, and The Shadow Dragons to anyone who loves fantasy, adventure, or even historical fiction. 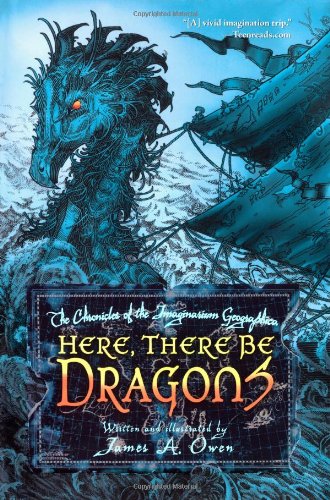