Their Eyes Were Watching God


We human beings have nothing to our names besides our identities and the people we have touched. When everything else fades away, our memories burn, and our own mortality hunts us down, what else do we have? In Zora Neale Hurston's literary masterpiece, Their Eyes Were Watching God, a young girl named Janie Crawford wrestles with her indecision and outlook on love and life. As an octoroon girl raised in the south, she faces the best and worst of life while moving from place to place in Florida, gaining courage and an inspiring inner-strength, finding and losing love, and ultimately discovering what it means to truly live. Like Janie, each person must battle against the impersonal, controlling forces of the world in order to forge his or her own identity if he or she ever hopes to be truly free.

Early in the novel Hurston weaves a tapestry of words depicting a voluptuous, erotic, and stunning image of a bee pollinating a pear tree: “She saw a dust-bearing bee sink into the sanctum of a bloom; the thousand sister-calyxes arch to meet the love embrace and the ecstatic shiver of the tree from root to tiniest branch creaming in every blossom and frothing with delight. So this was a marriage!” (11). When Janie's grandma denies her the natural love she so desires, Janie sinks into a depression and optimistically hopes that she will find love. Her quest to capture the spirit of that moment drives her character onward throughout the novel, propelling her through Logan and Joe, and finally into the arms of Tea Cake, her final husband and only true love. Logan Killicks never respected Janie, he simply used her as a mule; a tool of labor. Jody seemed to love her initially, but at some point she realizes that he stifles her. “…Mah wife don't know nothin' ‘bout no speech-makin'. Ah never married her for nothin' lak dat. She's uh woman and her place is in de home.” (43). Only Tea Cake, her last husband, truly respects her, not only as a woman, but as a fully-realized human being. In teaching her to shoot firearms, he gives her the accompanying independence and fulfillment that come with self-reliance, gifts that proves to be life-changing for her.

The natural and impersonal forces of the world tear again and again into Janie. One may find it difficult to pinpoint an antagonist working opposite Janie, and this is an excellent display of how impersonal her demons dancing throughout her life are. Nanny's advice to seek financial security and respectability contrasts sharply against Janie's independence and adventurousness, but she wants only the best for her child. Jody attempts to give Janie a clean life without her having to ‘lower herself' or talk to the townspeople. Even the racist white men who strong-arm Tea Cake in Palm Beach remain nameless, faceless beings who are more products of their environment than anything else. And when the environment itself churns itself up to frenzy and surges into Janie's life, there is no one to blame for the mayhem. Where is God in all this chaos? These magnificent, but often capricious and terrible forces, like Mrs. Turner's racism, Hurston describes as idols:

“It was inevitable that she should accept any inconsistency and cruelty from her
deity as all good worshippers do from theirs. All gods who receive homage are
cruel. All gods dispense suffering without reason. Otherwise they would not be
worshipped. Through indiscriminate suffering men know fear and fear is the
most divine emotion. It is the stones for alters and the beginning of wisdom.
Half-gods are worshipped in wine and flowers. Real gods require blood.” (145)
Obviously these are not gods, but they may be worshipped as gods. Against all these forces one can not help but feel powerless.

As they observed and contemplated the tempest rampaging around them, they beheld only whimsical, random forces of nature. But there is one virtue in Janie's world. Mutual, natural love rescues her from her former life and gives her a new birth with Tea Cake. When she begins seeing him, the locals are quick to note that she “Done quit attending church, like she used to. Gone off to Sanford in a car with Tea Cake and her all dressed in blue!” (110). She has even given up the false god of religion in favor of her love for Tea Cake. Love, however, proves itself to be a much more tangible god. When the storm comes, and a mad dog threatens and attacks Janie, Tea Cake steps in and saves her, transposing himself between her and the danger. His eventual death at her hands after saving her life seems strongly reminiscent of Jesus's death at the hands of humanity for trying to save them, but in this context it is a necessary step in her development. Having finally found love and gained independence, as symbolized by her marksmanship, she understands that the real Tea Cake is gone and that she must continue to live for him. In pulling the trigger against her lost lover, she finally proves herself fully independent, and wide-awake. “Of course he wasn't dead. He could never be dead until she herself had finished feeling and thinking.” (193).

God is love. Tea Cake's escape with Janie is her route to the Promised Land. True love is the only real god of our lives: it can free us by parting the seas, strengthen us to do all things, and can make our voices loud as trumpets. When love is natural, it is truth; and the truth shall set you free. 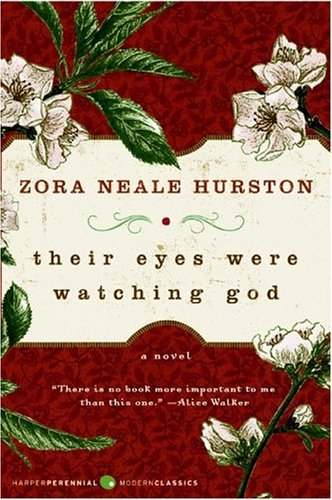