The Thief Lord by Cornelia Funke

Venice, a magical place where anyone is excepted into society. Even runaway children could find shelter under crumbling rooftops and abandoded movie thearters. A couple of runaways banded together with the thief lord and created a gang that survives of his ‘findings.' When two boys, Bo and Prosper, seek refuge from their aunt and uncle, they run into more than they bargended for. The boys, Bo and Prosper, will discover something unthought of by readers everywhere. This book, a pulse ponding thrill ride of action, is called The Thief Lord.

For a book to be created into a masterpiece the author must be marvelous. Well Cornelia Funke takes marvelous to another meaning. In this meaning, marvelous stands for awe struck, actionfied, and intense thrills. Some people look at the back of a book, some the cover, some just the title, but the surefire way to get a good book is look for ‘Cornelia Funke.' Her style of writing makes other writers want to ball up in a corner and cry. She is a marvelous author with fresh ideas every book.

If you have ever read a book and made a connection then you're probably into the book. The Thief Lord is a wonderland of connections that just fall out of the book at you. Once you have fallen into the this book there is no turning back because you'll be wanting to know what happens next, and then boom a connection hits. After 10 or so pages that you indulge yourself in you'll have 10 or so connections. The Thief Lord is a warm refreshing pool that's open all year round. So what are you waiting for? Dive in!

This book is all about two young boys, Bo and Prosper, who ran away from their own Aunt and Uncle. When they were thinking all is lost, and they might as well return to their aunt and uncle, they run into a girl. The girl is a runaway as well and has lived with other runaways who are banded together. Later they discover the gang has a money source that steals things for a living and they all call him the Thief lord. There's something strange about him and Bo and Prosper soon find out the truth behind his mask. Even the darkest of tunnels have a light at the end and this tunnel is the darkest of them all.
The characters in this book are extremely believable. What makes them so realistic is the problems they have to face. They have big problems too like running out of heat and even money. The reason that they run out of heat so fast is because they use candles for heat since they live in an abandoned movie theater. The emotions are very realistic like when the cats die they get very sad. I'm just joking but they would probably cry if the cats died. They even deepened on each other, inspire each other, and need each other. The Thief lord tries to hide his emotions behind a mask, but you can tell they stick out. Prosper and Bo, the boys who ran away, are the typical brothers sometimes need each other and always they're for each other.

Therefore, this novel, a thrill ride chalked full of excitement, is given the title The Thief Lord. This extravagant novel takes place in a magical utopia where anything is possible. Banded together a bunch of street kids find shelter while living off the young thief lord's ‘findings.' The young children run into their own problems such as running low on heat or money. The German author takes this book to another level of suspense. Anyone who can read should read The Thief Lord at least once in his or her life. 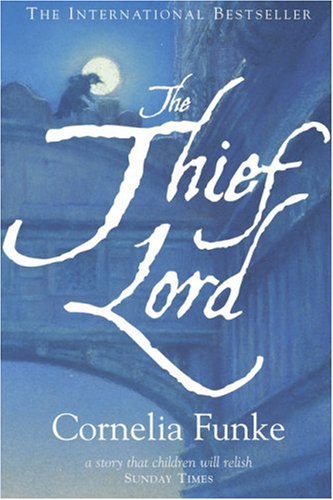