Ain’t Gonna Be the Same Fool Twice by April Sinclair

This is a story about the young adult life of an African American woman and her struggle against racism and sexism. However, it is not the expected story of black people vs. white people or women vs. men. It is rather the story of a girl who blends herself with many different people and who is living her life to the fullest that the world around her allows her to.


Stevie's adventures are driven by her exploration of her sexuality. In the beginning of the book, there are hints that she is bisexual, and throughout the rest of the book she gradually begins to act upon it.


Instead of remaining in Chicago where she was brought up and college educated, Stevie enters the new and exciting world of San Fransisco. She meets a woman named Traci who becomes her lover. They encounter discrimination against their lesbian relationship, but they bear it together. Later in the book, Stevie meets a guy named Buster and experiences for the first time being sexually satisfied by a man. Stevies last lover in the book is a white woman named Cynthia. Throughout the book, Stevie is displayed as an open, strong character with a free heart, who is willing to try new things while keeping touch with what is important to her and what she believes in.


April Sinclair expresses love and heartbreak, true colors and racism through a voice of a character that recognizes everything for its good and bad. This book is realistic, adventurous, and strong. It is the story of life and people.


Ain't Gonna Be the Same Fool Twice is the perfect book for an audience of young adults. This is largely because that is exactly what the book is about. If you want to read about a realistic journey of a young adult through the beauty and hurt of life, then you will enjoy the story of Stevie who allows herself to make mistakes but who “ain't gonna be the same fool twice.” 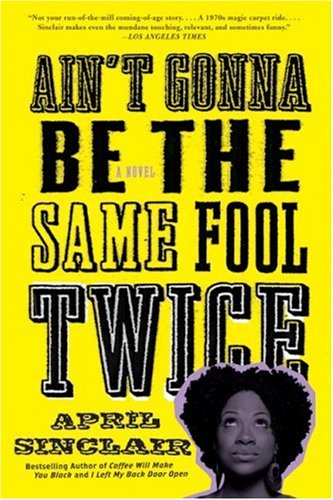