Sarah Lewis a typical 11th grade girl she is obedient, smart, and has very good friend. Until she meets Robin, Robin is this all-cad-in-black-bad-girl that has a very bad reputation and nobody likes her. Sarah started to change but not a good kind of change, when Robin and she are friends. Sarah starts to not care about anyone, her grades, she disobeyed her parents, starts to lie, she looses communication with her friends, and she always has to tell Robin her plans, and Robin has to approve of her plans. Then something happens that changes everything.

Before Sarah and Robin became friends, Sarah had two best friends named Gina
and Amanda. Gina is the kind of girl that in “one moment a rainbow, but in a twist of wind her colors disappear. Comedy and tragedy perch like twins on her shoulders, (Hemphill).” Gina has to sides of her one happy loving friend and another is the fear of her father's abuse. Amanda is a goody-good-girl that never does anything wrong a daughter that any parent wants but inside Amanda is hiding a deep secret that she does not want any one to know of not ever her two closest friends Sarah and Gina.

This book Things Left Unsaid is realistic fiction. Anyone can go through what Sarah Lewis, Robin, Gina, Amanda, and all the characters in the book went through, especially the change that altered everything.

In this book Things Left Unsaid, there a few different themes the main theme is, people change by influences around them such as new friends, also that people hide there emotions (feelings) so they wont hurt someone else's, and don't let some one make your own decisions. The way the author represents these themes is by the behavior of Sarah Lewis.

The author Stephanie Hemphill has a unique way of writing, which is writing in poetry form. The way she writes her book makes the reader think a little bit more, to find out what the poem is trying to say or reveal. This book, Things Left Unsaid is very different from other books you may read, because this book is a novel in poems. Which many readers may or may not like about this book.

This book Things Left Unsaid has a lot of emotions and drama that can change any one, including the characters in the story. Through out the book you will feel grief, sadness, love, and confusion; for the characters that are being unfolded in the drama. 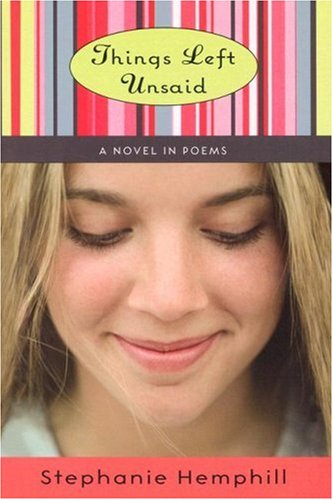