Collapse: How Societies Choose to Fail or Succeed
"That Crackpot?" : A Brief Review

With an inside-the-beltway DC liberal for a father, and an inside-Northwest-Expressway more conservative, iconoclastic stepfather, my heart is politically divided. Even when it comes to taking a stand on less political issues, my dad and my stepdad still radically differ. Sometimes, I feel that this keeps me from being the intellectually rebellious teenager-- no matter what candidate I say I support, regardless of what I read, it's upsetting one and impressing the other. However, upon my mention of an interest in Jared Diamond's Guns, Germs and Steel, both my father and stepfather scoffed. Each of them had an argument about his training as an ornothologist, claiming he "poses" as a historian. One said he had better writer friends than Diamond who could never dream of making the New York Times Bestseller list. One complained of his mainstream status.

When I saw the monolithic book sitting on the shelf at my local Borders, needless to say, I was highly interested.

Not only did I want to read something discouraged by my two paternal roles, it's not often that I get into historical accounts lately. I won't deny the intimidation factor of the daunting 525 pages of those accounts. But after skimming each chapter, I was prepared to at least attempt to immerse myself into the rituals of the Maya, the Easter Islanders I thought had disappeared, and the days of an inhabited Greenland.

Dr. Diamond made it somewhat difficult.

While I understand books are outlined, and it is important for writers to explain the organization, this is usually laid out in the introduction. Throughout the sometimes fascinating, sometimes yawn-inducing details of past societal collapses, even by page 350, Dr. Diamond seems confused as to whether or not he is still writing the introduction. Although he is a well-studied professor nearly emeritus at UCLA, and has every right to do so-- whereas I am a barely-studied 15-year-old high school sophomore, and have no right to criticize-- I as a reader am more intrigued with reading about the cannibalistic tendencies of the late Anasazis than I am with whether or not cannibalism fits into Dr. Diamond's "five-point framework." To me, it seems as though repeatedly stating the factors playing into societal collapses makes no collapse unique: such a thorough narrative of a millennia of details is less effective after being stifled by a "framework."

As much as I learned from Dr. Diamond, and as fragile as I now realize our earth really is, his monotonous style makes me hesitant to check out Guns, Germs and Steel as I had originally intended... 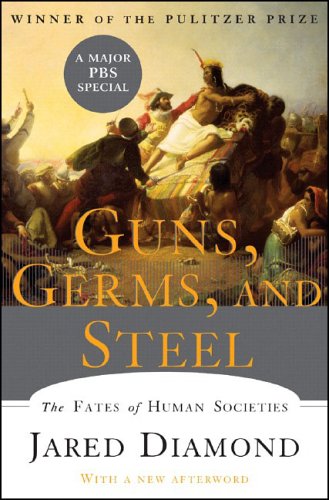