Funny in Farsi: Book Review the first alliterative words of the title, Funny in Farsi establishes a hilarious tone, which continues throughout each chapter of the memoir. Firoozeh Dumas began to write Funny in Farsi as a personal memoir, but later realized that she shared the memoir with her father, Kazem. The memoir follows Dumas and her family during the 1970s, after they emigrate from Iran to the United States. Each chapter of the book describes a new adventure, or problem, for the family, usually involved with their assimilation into the American culture. Although Dumas' tone remains mostly funny throughout the book, some of the chapters describe the struggle, and even pain of emigrating from Iran. Overall, Funny in Farsi presents a new side of immigrants from the Middle East countries, a refreshing side, less familiar to Western readers, and gives a positive view of both Iran and the United States.

Funny in Farsi begins with Dumas and her family's first days in America, trying to learn English, as well as the entire American culture. Although Kazem, her father, studied for graduate school in Texas, his English consisted of engineering terms, and provided little help for his family. Once established, the family goes on many adventures, from Disneyland to Bowling for Dollars and shares many humorous mishaps associated with the gap between Iranian and American culture. Kazem's love of Disneyland brought the entire family, with countless guests, to the theme park countless time. However, when Firoozeh lost her family at Disneyland, at age seven, she experienced her first realization of the ignorance of Americans, expressing her sarcastic view, “Despite the belief of most Westerners that all Middle Easterners look alike,” when a Disney employee asked her to talk with another lost foreign child who spoke no English. As Iranian immigrants during the 1970's, even in California, Dumas and her family seem like outsiders. However, Funny in Farsi establishes a new tone, facing adaptation, and American culture with humor. The family blends into American culture, with a refreshing open-mindedness, still keeping some Iranian traditions, but also accepting, for example, Kentucky Fried Chicken over a decadent Persian meal when they realize the impossibility of cooking without servants. Not without its serious moments, Funny in Farsi also describes some of the prejudice in American during the 1970's. In the chapter, I ran and I ran and I ran Dumas especially addresses the issue of prejudice, through the visit of the shah, when protesters attacked the entire Iranian crowd along with Dumas and her family, while they listened to the shah's speech. Dumas gracefully addresses delicate issues, such as the Islamic faith, using Kazem's wise words, as he explains his love of ham but also his faith as a Muslim, for her view of religions: “It's not what we eat or don't eat that makes us good people; it's how we treat one another.” Dumas and her family successfully establish a balance between Iranian and American cultures, inspiring the reader to be open to new cultures, and face the world with humor rather than violence.
Funny in Farsi establishes a new view of immigrants from the Middle East, and the region as a whole, showing a humorous side of the people indigenous to that region. In addition to the positive views of the Middle East, Dumas also writes with an affirmative view of America from the perspective of an immigrant, incorporating the theme of immigrant assimilation, and showing universal difficulties, still relevant today. Although books regarding the Middle East often skew toward either the Middle East or the United States, Dumas shares love for both parts of the world. Funny in Farsi appeals universally, a best seller in Iran, as well as in the United States. By writing such a charming, and funny book, Dumas creates a refreshing view of each nation, for the other nation. Dumas also highlights her father's words, “How said it is that people so easily hate an entire population simply because of the actions of a few,” and brings to attention the bias established regarding the Middle East. Funny in Farsi brings about a new genre, Pro-Middle East and Pro-American, sharing her memoir to create identifiable issues for immigrants, but also to show her love of America. The humor in Funny in Farsi connects all the topics Dumas addresses, making the book a light read, with a lasting impact.
Although her first work, Dumas' Funny in Farsi shows promising writing, and her second book, Laughing Without an Accent, is currently in publishing. Funny in Farsi was published by Random House in 2003, and is sold for $12.95. 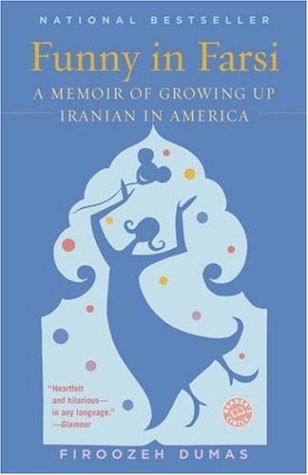 Favorite Quote:
"How high are you willing to climb...when your scrared of heights?"

Hall19Sarah said...
on Nov. 14 2012 at 11:38 am
People in the world receive the personal loans from different creditors, because it is comfortable and fast.