A Break With Charity by Ann Rinaldi | Teen Ink

A Break With Charity by Ann Rinaldi MAG

Ann Rinaldi demonstrates her exceptional writing abilities on the pages of A Break With Charity, a historical novel that takes place during the Salem witch trials. This book is similar to Rinaldi's An Acquaintance With Darkness in that she weaves historical information into a personal tale of hardship. Real names, dates, and occurrences are artfully placed through a story that brings history to life.

I became even more impressed with the historical authenticity of this novel when I learned that the main character, Susannah English, actually existed. Indeed, she most likely was not involved in the witch trials to the extent that the fictional Susannah was, but Rinaldi makes sure that all known information about the true Susannah coincides with the story. She simply fills in the unknown with a realistic and exciting plot of what could have actually happened.

I applaud Rinaldi for this well-written novel. It captured my attention. The book had a strong impact on me as I imagined the fear that coursed through innocent people who were accused of ridiculous crimes and punished harshly. My only complaint is that the reading level was on the younger side, so I finished it fairly quickly. This is not author's fault, though, if she meant the story to be for a young teen audience.

A Break With Charity is ­easily worth the read, especially for those who are drawn to history. 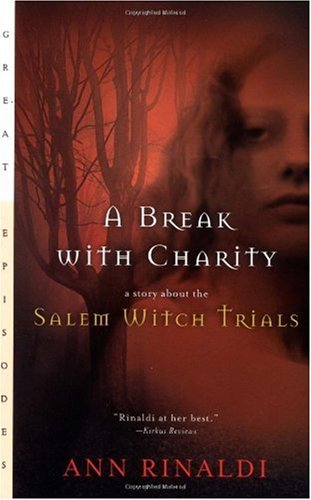 Favorite Quote:
Respect the nerds, they will be your boss someday- The Computer Guy.
The best is yet to come and baby won't it be fine- A band.
Defiant is the best word in the dictionary!

Favorite Quote:
"Children aren't coloring books. You don't get to fill them with your favorite colors."
— Khaled Hosseini

View profile
I read 'A Break With Charity' last year, and I must say, your review gives it justice!