Have you ever had a game that you can't get enough of? Mine is the Orange Box. The Orange Box is actually five games: Half Life 2, Half Life 2 Episode 1, Half Life 2 Episode 2, Portal, and Team Fortress 2. In this paper there are three main reasons why I enjoy, and recommend this game. They are the price, game play, and history.
First we have the price. The Orange Box only costs twenty dollars, brand new. This is a really good deal considering you get five games. If you were to buy them separate they would each cost about twenty dollars. They may not be as popular as Call of Duty 4, and Halo 3 but still worth the buy. The Orange Box also has great replay value. Replay value is how much you play the game after you've beaten it. For example Call of Duty 4, because it has multiplayer. I've been playing this game for quite a while. The Orange Box has achieved over 100 awards.
Next we have the game play. Each game has its own unique styles. The Half Life series is futuristic but still realistic at the same time. Its realistic because you can die really easy, and its unrealistic because of the weapons and all of the futuristic things. Half Life also has a lot of cool vehicles and weapons. One of the best weapons is the gravity gun. It allows you to pick up objects and shoot them by using gravity. My favorite vehicle in the game is a car that resembles a 1969 dodge charger. Half Life 2 is full of puzzles and lots of action. Portal also has a futuristic style. It has a portal gun which is used to get from place to place. You shoot a blue portal and an orange portal. One is the entrance and one is the exit. Portal can be really hard at some parts but I think that's what gets people hooked to it is the difficulty level. Team fortress 2 is not futuristic like the rest. It also doesn't have a story line. In Team Fortress 2 is a class based online game. You can choose one of nine people. There are three different types of classes: offensive defensive, and support. Most people like the game for the cartoonish graphics, however it often turns people off. The longest of the games is the Half Life series. It is three games long. Portal is a short game but very entertaining and you will want to keep playing it even after you've beaten it. In the game you are an experiment who is being tested to see if you can pass through all the obstacles.

Last we have my history with the game. I have owned this game for about 8 months. I have beaten Half Life2, Half Life 2 Episode 1, Portal, and I'm working on beating Half Life 2 Episode 2. My current gamer score for the Orange Box is 650. Of the five games, the game I play the most is Team Fortress 2. I have spent over one hundred hours in this game alone. My favorite classes are the Spy and Scout. I like the Spy because you can get behind enemy lines and quickly kill people with a back stab. My reason for liking the Scout is that he is fast and can capture points faster.

I have mentioned the price of the game, how the game play is, and my history with the game. If you really like video games, and want a cheap, game that will entertain you for a long time than buy the Orange Box. If you don't like it you can always sell it, or trade it in for something else. 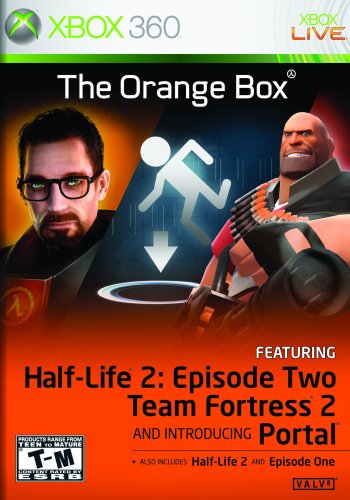 Favorite Quote:
When life gives you lemons, make grape juice, then watch everyone wonder how you did it!