Ya know, 2003 was a pretty rocky year for gaming. With already tons of some of the worst game of all time coming out that specific year, there just weren’t that many great titles as far as I should remember. And I should know, because I was born in 2003! But at this time, the PS2 was still going strong, trampling over the other consoles Gamecube and XBOX. And with that the PS2, had somewhat clearer focus on mascots, with the main mascots being Ratchet and Clank, Jak and Daxter and Sly Cooper. And after the rocket fire success of the original game of Ratchet and Clank, selling over 3 million copies, Insomniac Games instantly set to work on the sequel.

Development actually went smoothly, since know that they knew all they had to do was fix problems of the original and make it more fleshed out and fun. And when it was released on November of 2003, it was acclaimed by critics for its more rewarding gameplay, balanced difficulty, and humor. There were criticisms, obviously, but I will elaborate on that later. Now it is time for story time. And just a fair warning, spoilers will be present.

Taking place a little while after the first game, Ratchet and Clank are famous and seem to be doing well, but are disappointed that they haven’t had another adventure. At that very same moment, Ratchet and Clank are teleported to Mr.Fizzwidget, founder of MegaCorp, who tells the boys to go find his missing experiment (ProtoPet), that was stolen by a masked thief. They eventually stop the thief, only to find out that it is a girl named Angela, and that she was trying to help stop them, as apparently ProtoPets are dangerous to the galaxy.

Along the way, you will be part of gangs, learn the truth of the ProtoPet and help explore even more bizarre worlds and characters then before. It is a little bit better than the first games story, since a lot more is at stake here and more danger is afoot. Also, during your adventure, you will see clips of previous game antagonist, Captain Qwark, who has just escaped from jail. Where is he and what will he contribute to the story? Play and find out. Unless you have, because you are reading this.

Gameplay returns with some slight improvements, such as finally strafing, better aiming, and more practical guns overall. Speaking of guns, Going Commando has some of the series best selection of guns. Ranging from your standard pistol, to the giant bomb explosion, a disc shooter, a rocket gun, a sniper, and etc. Some guns from Ratchet and Clank 1 actually return, so long as you have save data on you PS2 or PS3 memory card. But in my opinion, the best gun for you to try is the Bouncer: it is a gun that shoots mini-bombs at other players. It makes it great to get rid of large hordes of enemies, it isn’t that expensive compared to other guns, and it takes care of the final boss like a piece of cake.

And shooting guns isn’t all you do in Going Commando, as there are tons of brand new mini-games to play this time. Space shooter sections return again, except this time there are more of them and they are fleshed out better. Racing segments comeback, but this time it is a hoverbike instead of a hoverboard. New puzzles were added like ones where you flip switches and some where you move around on a sphere. Even giant Clank sections return (albeits only 2 levels). And of course regular Clank sections make a grand return too.

Mini-games feel a lot more fun to use this time around this time, mostly because they feel like they were integrated better this time. The hoverbike races are super fun since they have much more speed and less floatiness than the hoverboard. And I think the new puzzles are a lot more fun since they weren’t made a slog. But ship sections still suck since during your first few times you don’t have a lot of power to it, making it really hard at first. Eventually you can upgrade it to make it more powerful, but if you do it to much, it will be to easy. So it is an odd blend that just makes it a mediocre mini-game.

And if you thought new guns and mini-games were the tip of the iceberg, don’t worry, there’s more. Ratchet got a different voice actor to better suit him, Ratchet and Clank have a better chemistry now that they aren’t at each others neck, gladiatorial battle arenas, more health this time and humor was more energetic. So I should give this a 10/10, right. Heck no! There are still problems with this game. I still think this game lacks originality, and the fact it can be relentlessly hard your first time playing. Mix that in with not that exciting platforming and not that many great new characters (aside from Slim Cognito). Also, since the true villain is Qwark, I thought he was not cool. Mix that in with an underwhelming boss and it is just a meh conclusion for the game.

But with these small nitpicks, I still love Going Commando. There is a reason why I still love this game and it is my favorite of the original trilogy. But if you haven’t played it, play it right now; you won’t regret it. 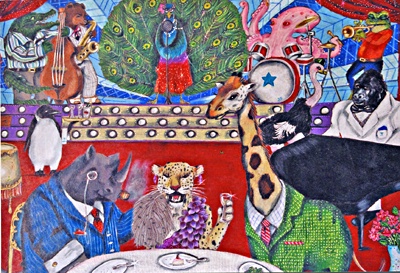 Hello fellow readers, I hope you enjoy my review of Going Commando. If you haven't read my previous review of the first game also.

Favorite Quote:
"Don't cry because it's over. Smile because it happened."