Review of "Xenosapien" by Cephalic Carnage

Love them or hate them, Cephalic Carnage have always been pushing the boundaries of technical death/grind. Cephalic Carnage incorporates much more jazz, doom, and sludge influences into their music than most of the other leading technical death/grind bands of today. When was the last time you heard Dying Fetus or Cryptopsy play a genuine doom metal song? When was the last time you heard a saxophone solo in a Cattle Decapitation song? But, as with all bands that are willing to experiment, to change styles, to drasticly transform sounds over time, there is a raised chance of falling flat on one's face. Anyone who's listened to Xenosapien will agree that Cephalic Carnage have hardly fallen on their faces, but Xenosapien, their most experimental album to date, may succeed in concept, but hardly in execution. What we have here is a collection of songs that range from being amazing to pretty good to extremely boring, and though the underlying thought process of taking their death/grind meets technical jazz meets doom diversity and taking it to the “next level” is excellent, Xenosapien does not seem like a step forward. It's varied, that's a fact. But there isn't very much cohesion, and all but a few of the songs leave no lasting impression. Xenosapien is destined to be a release that I find listenable, but not an album I'd care to listen to multiple times, and not an album that I'll find myself thinking about in admiration anytime soon.

The album opens up with a few seconds of soft guitar, before blasting into the traditional death/grind madness of “Endless Cycle Of Violence.” Being the most straightforward song, it's an obvious opener. With the next track being “Divination & Volition”, the band leans more to their really technical grind side. That being said, the song gets pretty boring pretty fast, despite the constantly changing tempos and riffs. The next three songs are also more in the grind style, but they also incorporate more death metal arrangements, and have slower sections. They are nothing spectacular; adequate, some even above decent, but nothing that sticks to your ribs, no melodies that are memorable. “Heptarchy (In The UK)” is a definite step up. I could listen to this song on repeat a couple times and it definitely wouldn't bore me. “Heptarchy (In The UK) is just a good, fun death/grind song, with a bit of a rock feel in the riffs (it's hard to explain, just trust the fact that it is there). Next up is “G. Lobal O. Verhaul D. Evice”, my favorite track on the album. It's a slow, doomy song with some clean vocals, and though they seem a bit odd at first, they actually fit the song really well. The song breaks, and there is a soft saxophone solo, and then it comes back into its sludgy, doomy, goodness. I'm just generally satisfied by “G. Lobal O. Verhaul D. Evice.” The following two tracks, “Let Them Hate So Long As They Fear” and “The Omega Point” are quite bland. To follow the slowest song on the album with a minute long grind piece is a BIG mistake. To include the mmmeeeehhhh-fest that is “The Omega Point” on a Cephalic Carnage album is a BIG mistake. To try and pass a handful of good or decent-plus songs spread out between merely adequate grind tunes as a great experimental album is a BIG mistake.

Luckily for us, Xenosapien ends on a pretty good note. “Megacosm of the Aquaphobics” is a pretty cool tune, and I can actually remember a few of the melodies used, and they're definitely hum-able. The album closes with “Ov Vicissitude”, a great slower song that I really dig. On my edition of the album, there is a hidden, untitled track. The untitled track is by far the sludgiest song on the album, and it is just a really great song to chill to.

So, overall this album isn't awful. Because Cephalic Carnage insists on including a wide spectrum of song styles, the album suffers, though. If one took “Heptarchy (In The UK), “G. Lobal O. Verhaul D. Evice”, “Megacosm of the Aquaphobics”, “Ov Vicissitude” and the hidden track, there would be one heck of a great EP, one that was pretty much as experimental and varied as Xenosapien was probably intended to be. So yeah, Cephalic Carnage knows what they want; they just aren't totally able to obtain it. I expect a great album from them in the future if they nail the formula right. But Xenosapien just doesn't fit the bill. Xenosapien has great ideas, but the execution is flawed. It's worth owning if you find it cheaply, but if I were you, I'd save your money for the next Cephalic Carnage album. 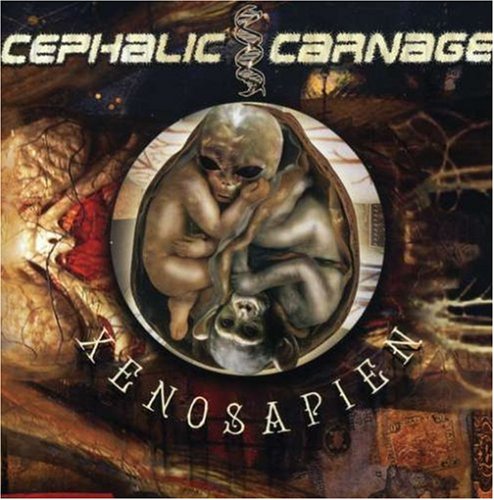