Alice Through the Looking Glass

Welcome back to the wonders of Wonderland.....

Mia Wasikows portrays a fine Alice Kingsleigh,tough and strong,battling the perils the sea has to offer like a seasoned captain. The movie kicks off with Alice desperately trying to defend her ship, the 'Wonder', from pirates while a raging storm goes on. The entire crew has lost hope.Mr. Phelps, a crew member, says, "Captain, it's impossible."

Alice replies matter-of-factly'You know my views on that word."

It delivers the fact in everyone's faces. Alice is definitely the kind of girl who believes in herself and does not sit around like a damsel in distress. Alice returns home and meets her mother, Helen Kingsleigh(Lindsay Duncan) who,like every caring Mom,is worried about her daughter's future. And her fears are justified, given the fact, that the story is set in the 1800s, a time that didn't respect women dealing with tasks meant for men. Alice finds her spurned suitor, Hamish Ascot, and discovers that the guy has a master plan to make Alice give up her ship. If she doesn't Alice and her mother shall no longer have a house. Frustrated with everything, Alice decides to grab some me-time. That's when she finds the blue butterfly, Absolem, and eventually ends up in Wonderland.....again.

Before I write further, let me just say that the voice of Absolem (the blue butterfly) delivered crisply by Alan Rickman reminds me of Severus Snape in that dull aching manner only a fellow Potterhead can understand.

The Hatter (Johnny Depp) has latched onto a hope that his family is still alive, contrary to the belief that they had been murdered by the Queen of Hearts. The Hatter loses his effervescent mirth and begins to show signs that every woe-ridden workaholic in our world bears - lack of happiness, lack of social interaction and well, no peace of mind. Alice is disturbed at first and then decides to see the past herself and makes a decision to travel back in time. But for that she needs the Chronosphere, a magical object that can help you cross the ocean of time. And the Chronosphere is with, well, Time (Sacha Baron Cohen) himself. The actor plays the role quite convincingly and delivers dialogues that honestly made me laugh. Given the fact that he is Time, a little later in the movie, the characters indulge in making puns on him.

Anne Hathaway, charming as always, plays the White Queen, with her pretty white gown and vivid hand movements.The movie will eventually make you see how one small mistake, one little lie that makes you think 'Not a big deal, I can get away with this." can almost change the course of future. The movie taught me, that family bonds are sacred. You never know when the last thing you said to your parents could be the very last thing you say to them. So if you just fought with someone in the house, go hug them and say sorry, because, as Gwen Stacy from The Amazing Spiderman says "What makes life valuable is that it doesn't last. What makes it precious is that it ends."

And if you think your life is too busy and your favourite quote is "I'm literally racing against time," then please watch this movie and think about what your new punch-line should be. The last scene is endearing as Alice first decides to sell the ship for the house but her mother decides that above all self-esteem is a treaured aspect and one shouldn't compromise on that.

Although the movie didn't make quite as much as it's prequel in the first week in the terms of earning, but it's worth watching it for the fun, the adventure and the thrill of revisiting your childhood.

I did and I found it quite appealing. 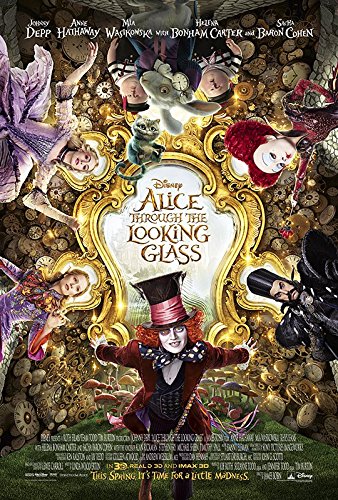 
Buy from Amazon Available on iTunes
The author's comments: