Is it a Disney movie? The company is best known for its princess-themed musicals, where evil is often a lone villain lusting after total domination and destruction. Death nearly rips lovers apart; but they survive, and it’s a happily ever after ending complete with a clanging of wedding bells. Usually.

Perhaps this is the reason for forgotten gems like the 2002 animated release, Treasure Planet. Based on Robert Louis Stevenson’s Treasure Island and directed by Ron Clements and John Musker, Treasure Planet is a futuristic, steampunk-esque twist on the classic. In a whimsical world where aliens are common folk dressed in Victorian Era attire, and fleets of majestic ships sail through a breathable outer space known as the “Etherium”, the main character is also unconventional, both for social and Disney standards. An outcast by his own sardonic and reserved persona, Jim Hawkins (voiced by Joseph Gordon-Levitt) sports a rattail, gold earring, and bulky, baggy clothes; an interesting cross between pirate and punk. Once a sweet, imaginative toddler, he’s now an apathetic, hopeless adolescent who spends his days roaming about on his homemade solar-surfer (a sort of hoverboard/skateboard/windsurfer), and getting in constant trouble with the local police on his home planet of Montresor. His exhausted single mother, Sarah Hawkins (Laurie Metcalf), runs the Benbow Inn, and even though it’s clear she loves her son, her patience and resolve is wearing thin.

After Jim’s solar-surfer is impounded by the cops, an old salamander named Billy Bones (Patrick McGoohan) crashes on Montresor, near the inn. Rambling about pirates as he presses a peculiar gold sphere into the boy’s hands, Bones leaves him one last warning: “Beware the cyborg”, before dying of his injuries sustained by the crash. The inn is then attacked, and Jim, Sarah, and family friend Dr. Delbert Doppler (David Hyde Pierce) escape, leaving the Benbow to burn to the ground.
At Dr. Doppler’s house, Jim figures out how to open the sphere, revealing a holographic map of the universe. It’s a startling find, made even more so when they realize the fabled Treasure Planet, a distant locale containing “the loot of a thousand worlds”, is on the map. Sarah is quick to dismiss this as the nonsense of children’s stories, but Jim convinces her to let him go on a voyage to find it, with Doppler commissioning a ship (the RLS Legacy), a captain, and a crew.

Upon arrival at the Montresor space port, Jim and Doppler meet the sharp, no-nonsense Captain Amelia (Emma Thompson) and her loyal first officer, Mr. Arrow (Roscoe Lee Browne), and Jim is assigned to work alongside the ship’s cook as the cabin boy. The cook just so happens to be a cyborg named John Silver (Brian Murray), with a curious, glob-like pet named Morph (Dane A. Davis). Immediately, Jim is suspicious, and rightfully so; Silver is the real leader of the crew; calling the shots over a gang of pirates who are plotting a mutiny once they reach Treasure Planet.

Yet here is where the story reveals its multiple facets. Silver takes Jim under his wing, and it is their relationship that truly shapes the film and makes it more than just a fast-paced treasure hunt. This cyborg, capable of being both charming and frightening, teaches a stubborn teenage boy to work hard and grow into a strong, respectable man. Silver teaches Jim the things a father would normally teach, and while the movie’s theme “I’m Still Here” (sung by John Rzeznik, front man of the Goo Goo Dolls) plays during a particular scene, the viewer begins to understand why this solitary dreamer is so reserved and withdrawn. Jim’s faceless father is shown to be absent often, and when he is home, indifferent and oblivious. Eventually, as the song reaches its peak, a pre-teen Jim is shown chasing after his parent, who boards a ship and sails away without looking back. Both he and the audience start to see that Silver is stepping up to take up that vacant spot left by a man who wasn’t ever really there.

This is a lovely storyline, enhanced by gorgeous backgrounds of stars and galaxies and the seamless incorporation of CGI into the more traditional, hand-drawn animation. Not only is the idea of flying ships and intergalactic exploration creative and exciting in itself, but there is a real, tangible plot behind it all. However, when this movie premiered, it was a box office failure. Up against Lord of the Rings and Harry Potter, ten years of hard work by animators and various behind-the-scenes contributors were essentially forgotten as Disney was quick to shrug off this “bomb” of a film. In fact, this is one of the company’s biggest losses. Critics had rather sublime reviews of the film, nothing too scathing. More depth could’ve been added to Jim’s character in the beginning, to help flesh him out and make him appear less flat. Also, Silver could’ve been more sinister and evil-acting, to enhance that pirate-y side of his and make his rages more believable.

Still, Jim Hawkins is one of the more meaningful and realistic characters Disney has created. His relationship with Silver is complicated; they can be best friends one moment and then tearing at each other’s throats the next. There is no love interest for Jim; what propels this fifteen year old boy across the universe for the sake of finding lost pirate spoils is the chance to make his mother proud, and just the sheer thrill of leaving a rural hometown for adventure. It just so happens that along the way he matures and discovers a part of himself that he never knew existed, a part of him that is brave and courageous. What he and the audience learn is that you can’t change what has happened in the past, that you can’t change the people around you or change what they do. However, there’s always time for you, you as an individual, to change. There’s always time to succeed and grow, drawing upon your own inner strength. Despite the fact he’s been essentially written off as a “loser” by the adults in his community, Silver teaches Jim that he can show them that he’s going to exceed their expectations, he’s going to “chart his own course” for a future he never thought possible. This is a unique message very few kid films address today, and Jim’s own personal determination sets this Disney movie apart from the others.

The tenth anniversary of Treasure Planet is this year; give this film a chance. Nothing else by Disney or any other animation company is quite like it. 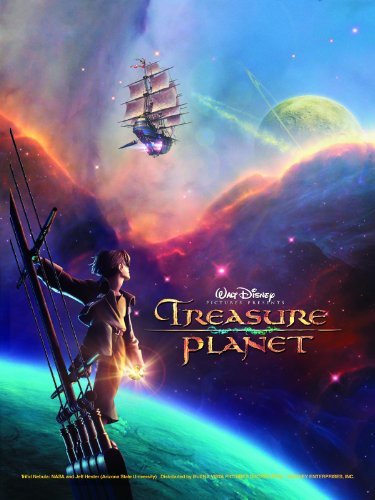 
Buy from Amazon Available on iTunes
The author's comments:
And I want a moment to be real
Wanna touch things I don't feel
Wanna hold on and feel I belong
And how can the world want me to change
They're the one , they stay the same
They can't see me
But I'm still here

View profile
I actually recently saw this. My mother originally didn't let me go see it when it came out because she thought the main character was "too odd". Though I probably would've been terrified at that scene too if I'd seen it when I was younger. :)
RainyWriter GOLD said...
on Jun. 16 2012 at 3:18 pm
RainyWriter GOLD, Redmond, Washington
14 articles 0 photos 41 comments

Favorite Quote:
"I would rather hated million times for what i did then loved a million times for what i didn't do." - Daniel Moto
" I've sought out to be the best i could posibly be but when i hit a roadblock in life what did i do, i had two choices either stay at the roadblock or i take this roadblock and make of it and go around it and achieve my goal. So, what will it be?"- Daniel Mathia

"People take love like its a four letter word or just a phrase that you tell people or your friends all the time. But in reality love is much bigger than a merely phrase or 4 letter word. Instead love is a genuine promise or covenant to that special person."-Daniel Mathia

“Why change yourself when you were made perfect and wonderfully by the creator of everything?” – Daniel Mathia

“If live is not hurtin then were really not living in.” – B. Reith

This was a really good article. I've never seen this movie. So, know after reading your review i found it really helpful and intersting to watch this movie.

Suggestin: You should write more reviews of stuff cause your good at it

I remember being TERRIFIED of this movie when I was younger, because of the scene where the dude gets sucked into -- well, I think it was a black hole? I don't know. I haven't seen it since that first time in theatres, because of how scared I was.

However, I do remember enjoying the rest of the movie quite a lot. It didn't really feel like a Disney movie, which was part of what made it great -- it felt unique. :)