OK, first of all (to those of you who don't know me well) I want to make it clear that I abhor Twilight and anything to do with it. (I AM a hater, get used to it.) I hate the books (poseurs), the author (for writing the books) and most of all, the MOVIE. Tonight, I have witnessed one of the most horribly gushy, corny, and disgustingly PDA-oriented movies EVER PRODUCED. I would not wish this movie on anyone. The special effects, for one thing, were some of THE worst I've seen in, like, decades. Seriously? One does not refer to oneself as a "spider-monkey" when using "supernatural powers" to be pulled up a tree with an invisible cable. And the running? Tchhh. Special? Not these effects. Second, in my day (the age of non-fiction vampires) they definitely do NOT "sparkle" in the sunlight unless they are "sparkling" with FLAMES that burn the flesh off of their cold, white bones. "Oh, help me someone, this guy is SPARKLING at me!" Somehow, I don't find that scary or even creepy. It's not even pretty, it's just like.... well, SPARKLES! And the actors--don't get me started! (too late) When I first heard of Twilight, Edward sounded like a cute guy, but THE ACTOR was something else entirely. As in like, way, WAY too old for the role of a 17-year-old, has shaving issues and bad hair (SIDEBURNS?!) plus, he was just not attractive whatsoever! Like, who would ACTUALLY fall for him? All he did through the whole movie was scowl and be deeply in love with Bella. Now, this Bella person, for one thing, was waaaay stupid, at least in character. I haven't read the books (Gods forbid) but I got the impression that Bella was someone strongly indepent (while in love at the same time), slightly witty and sarcastic, or at least (pretend) to have SOME of her wits about her! This actress was all fluttering eyelashes and coy flirting--in other words, a COMPLETE AIRHEAD. After she met Edward, all she seemed to do was stare deeply into his eyes and try to kiss him. I had to sit through about 20 minutes worth of scenes (total) that just showed the two doing romantic things. The only fairly-good actor was the one portraying Jacob. Although this might sound a little hypocritacal, this guy had about 7 lines in the whole movie, but he MADE THEM WORK. Unlike Edward, this guy was good-looking, charming, and very sweet-seeming. Not only that, but he seemed to have a brain beneath that gorgeous hair! All the rest of the actors, I didn't really notice, but I will say two things; One, the actor playing the like, Head vampire or dad or whatever bore a striking resemblance to my image of the vampire Lestat (The Vampire Chronicles, Anne Rice) and two, I really loved the way that Alice actress looked.... I wish I looked like that! (DX) Overall, I&#39d say that this movie was a totally soppy, mushy, disgustingly false display of STUPIDNESS. None of the things they said about the vampires are true besides that they drink blood (duh) , have unique superpower-esque abilities, and are permanently destroyed by fire (this doesn't even WORk half the time). The worst part of the whole experience, though, was the SCREAMING FANGIRLS. OK, so fangirls themselves are the most ANNOYNG thing in the world, but fangirls for fictitious characters? That's downright idiotic. After the show, like the whole (entirely female) audience filed into the restrooms, and I was surprised to see about 15 10-13 year old girls giggling and squealing with the rest! WTF?! This "Team Edward" and "Team Jacob" bull was getting on my nerves too. First of all (as stated above) these people are 100% FICTION and they don't have (and most likely wouldn't want) hordes of young girls throughing themselves at them because they've read about their entire love life plus details! If people would question things a bit more, then maybe they wouldn't be FOOLED so often! 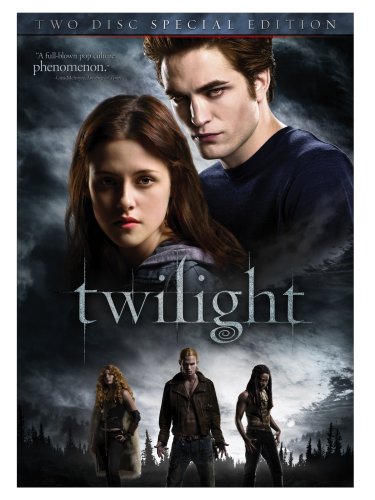 stacie8649 said...
on Oct. 21 2009 at 12:16 pm
I beg to differ with your article....maybe you need to re-read the books....for one vampires aren't real so anyone can potray them anyway they want....if the book was that bad it wouldn't be a best seller....and if the movie was that bad it wouldn't have sold $74 million in just the opening weekend...the whole point she potrayed vampires different is maybe becuase people have been writing, talking, and watching movies about vampires forever and maybe people get sick of the same old thing. the acting wasn't bad...the filming of the movie was awful...apperantly the only movies you have seen of kristin stewart and rob pattionson is twlight but you should try watching other movies of theres becuase they aren't bad actors....and jacob come on....he was barely in the first movie so dont judge his acting on the seven lines he did have...that doesn't mean hes a good actor....why don't you wait til new moon comes out to state thatt.
Mystery_Girl SILVER said...
on Oct. 14 2009 at 7:25 am
Mystery_Girl SILVER, Lake, Michigan
8 articles 6 photos 86 comments