Crazy Rich Asians is Not Conveying the Concept of Money

“The Bible has always been the best-selling book for the past hundreds of years, and because of that, people don’t even place its name on the top of the best-selling book list.” Therefore, the book Crazy Rich Asians grabbed the opportunity—it ranked number one on the New York Times best-seller list in August 2018, according to data from the internet. Kevin Kwan, the author who shows his talented excellence in writing, cooperated well with Jon M. Chu by presenting the film adaptation perfectly and gained vast applause from the audience. Don’t read it nor watch it, or you will repeat and review it again, and again…

Crazy Rich Asians, which was published in 2013, and turned into a Hollywood film five years later, achieves the most advanced and distinguished genre of its own kind. “All Asian cast forming a strong film altogether,” I was impressed by the trailer or the slogan even before I sat in the theater. What a newly developed kind of movie in the past thirty years in Hollywood history. I, a person who seldom pays attention to the sensitive issues on race, politics, or gender, was alarmed to realize, upon staring at the screen, that Asians (including me) are and have always been facing the issue of being stereotyped and not understood, even though they have put all the effort into accommodating and assimilating themselves into Western culture. The characters are flawless; they are described as a royal family; and the son of the nobility in Singapore, Nick Young, was notable enough to have paparazzi and secret followers in the US. However, the ethnic stereotyping is an embarrassment--this movie is filmed from a western perspective and shown to western audiences as well. There is no engagement of an actual or traditional Asian who would stand out and point out the inappropriate or unrealistic plot in this film. But, admittedly, a highlight of adaptations is to exaggerate certain plots, and thus let the audience relate more to the character's strong emotions.

Given that Kwan’s books have sold millions of copies, there’s no impugning the taste of his fans, but the fact remains that, in many of his stories, the portrayals of Asians were based on his early memory when he lived in Singapore almost thirty years ago, the luxurious lives he described may not be accurate enough to impress the world. Compare Yuanjie Zheng, a Chinese fairy tale writer who founded a children’s literature magazine known as the King of Fairy Tales. People might argue that Kwan and Zheng cannot be evaluated on the same standards since they write in completely different styles, yet Zheng often reflects a social issue as a topic in depth behind the fairy tale for children. For example, under Zheng’s pen, “rabbits” are domestic, huge pressure coming from the “wolves” (teachers) forces the “good rabbit kids” to lose the ability to think critically and independently. The only “positively defiant” character is also forced to live with a rabbit fur wrapped around himself. These kinds of ridiculous situations are not uncommon to see in the history of China, or even now in some non-advanced schools. While Zheng effectively relates the current issue with his fairy tales, Kwan remains partially old-fashioned based on his early childhood memory. With a Kwan, you gain a basic understanding of how Asians live (probably obsoletely); and with a Zheng, you learn about how this society is shadowed in our everyday life.

All of which means that Jon M. Chu, the director of “Crazy Rich Asians,” and Peter Chiarelli and Adele Lim, his screenwriters, are free to be innovative and creative. The director himself is in control of the ideas he wants to convey through this movie. He could either agree or disagree with the ideas in the book and, furthermore, add more emotional and expressive element into the movie. There is nothing to be conservative for the screenwriters and the director, and movie viewers will not recall the book version, which the Youngs are such a classy, old-money family that none of the rich in gossip-heavy Singapore have even heard of them. When it comes to the screen, the Youngs never hide their wealth so that there are even people who snap pictures of Nick in the US. So what has not changed? Well, the theme is still about Crazy Rich Asians, Chu being dedicated to creating the circumstances and setups all in luxury. I see his point. There are some notable changes from page to screen. But after all, for those of us whose main concern, as we board a cruise, is whether or not we will view the scene of the ocean as what we expected, there will always be something dreamily catching the sight of children who search for seagulls. The RICH scenes!! The shiny palace composed of marbling cement bricks and golden metal rooftop reflects the sunshine into the audience’s eyes. The big pearls hanging on Nick’s mother’s earrings and the perfect pattern of the silk clothes also add to the glorious and luxurious life. And, they have an independent kitchen with a thirty-member staff, and each person is responsible for a particular dish.

I am going to mention only one point I noticed about the film, which the book can never express: MUSIC. When the first background music started playing, I whispered to my Chinese friends criticizing its “antiquity”: how can a film with the topic of money and luxury life be accompanied with the music from nearly a hundred years ago? That is the point where I started to dislike this movie. As the plot moves on, the songs were still the ones I don't even know, but I could explicitly tell that they were OLD. After about thirty minutes, in the middle of the film, in Nick’s grandma’s house, when she greeted Rachel with warmness and a smile, I finally recognized that the coordinated song was from my childhood, somewhere around the 2000s. It was a really famous song, and a song that I finally knew. Upon staring at the screen and humming with the song, I recognized Chu’s intention. My interpretation might not be correct. However, the gradual development of the plot, which changes from obsolete thoughts about the societal level and class toward the openness of modern society, matches the evolution of music. In particular, the heavy beats and continued melody of the music in the early parts of the film clearly indicate the antiquity; and it cooperates well with the obsolete plots where the rich family despises Rachel with their innate arrogance. With the development of the plot (as Nick’s family gradually accepts Rachel and her identity), Chu’s decision of more lively tone with the energetic voice at the end highlights the obvious difference throughout the movie.

However, after all, while I was sitting in the theater laughing with tears, the surprising feeling of “a long-lost wish finally coming true” flooded me. Yes, Asian faces on the screen, which is an encounter and challenge of stereotyping and a breakthrough of the group of Asians. More importantly, these Asian casts are positive, humorous, confident, and modern. The characters they annotated have reached the level of—if the main character was a white girl, the whole film would become meaningless.

I recognized and stereotyped this film as a racist in the first place, but it turned out that this film is mostly about love, instead of crazy and rich. It is a love story about couples, families, friends, and home. Originating from individuals and families, background and cultures, and generations, everything the characters have encountered is typical and modern. It moves the audience.

This is a successful adaptation, I would say--some changes are perfect.

At the end, Nick and Rachel flew from New York to hometown Singapore. Once they landed, they were greeted with friends and brought to the night market for snacks.

The movie ended with two couples robbing each other’s food and driving down the road toward the sunset.

This is the feeling of hometown. 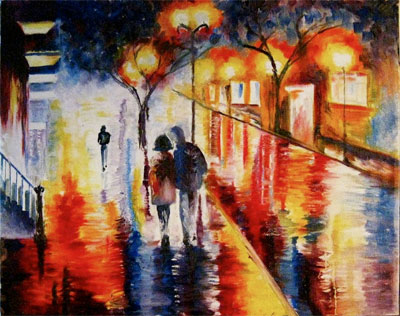 The movie Crazy Rich Asians was flooded with complimentary reviews when it first came out in North America. Me, an Asian who seeks out for alternative perspectives and tries to break through all the stereotypes, find it interesting to take a minute and speculate its meaning.

Favorite Quote:
The person, be it gentleman or lady, whom does not take pleasure in a good book must be incredibly stupid. --- Jane Austen