The Knife of Never Letting Go by Patrick Ness

Favorite Quote:
Yes: I am a dreamer. For a dreamer is one who can only find her way by moonlight, and her punishment is that she sees the dawn before the rest of the world.

In the Summer of 2014, I was desperate for a good read. My book shelf had run dry of unread books, so I was desperate for new, fresh material. After scrounging around for a while in Barns and Noble (mainly in the teens section, trying to avoid all the highschool girly romance novles that all have the same plot), I stumbled upon a white book with the shape of a knife in the middle of the cover called The Knife of Never Letting go. After reading a little ways in and being interuped by the same kid twice about what time it was I decided it would be worth the $9.19. Boy was I right. I had sadly ignorned the book throughout my time at camp and instead read other things I happened to bring with me. But I had nothing else to read for my overseas trip to Slovakia so I brought that. I COULD NOT PUT IT DOWN! I read it on the airplane, in the hotel, the hotel lobby, the air port, dinner, every where I had the chance to read it, I read it. The plot is amazing, there are plenty of dynamic characters, surprising twists and tearful/heartfelt moments.

The authour, Patrick Ness, has been renowned for his increadible work. One of his books: A Monster Calls, was was the first book ever to get both the Carnegie medal and the Kate Greenaway medal. The Chaos Walking triology which is where the Knife of Never letting go falls as the first in the series, deffinatly, or at least just to me, totally surpassed the Hunger Games, Divergent and all the other big teen series in every way.

Todd Hewitt is the only boy in a town of men. Ever since the settlers were infected with the Noise germ, Todd can hear everything the men think, and they hear everything he thinks. Todd is just a month away from becoming a man, but in the midst of the cacophony, he knows that the town is hiding something from him – something so awful that Todd is forced to flee with only his dog, whose simple, loyal voice he hears too.

With hostile men in pursuit, the two stumble upon a strange and eerily silent creature: a girl. Who is she? Why wasn’t she killed by the germ like all the females on New World? Propelled by Todd’s gritty narration, readers are in for a white-knuckle journey in which a boy on the cusp of manhood must unlearn everything he knows in order to figure out who he truly is.

I'm pretty sure I've made my self clear, but just in case: THIS BOOK IS TRULY THE BEST BOOK EVER. Completely and utterly the most creative, most well written work-of-art ever to grace this planet. I urge, no, implore you, to pick up a copy at a library or go buy it. This is a must read for everyone. 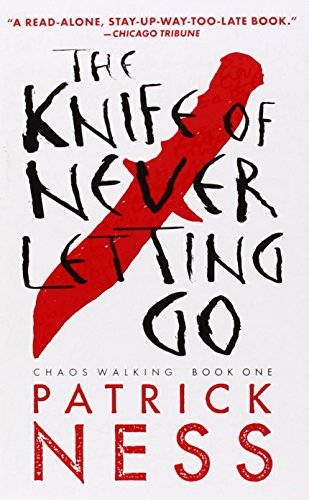