The Things They Carried by Tim O'Brien | Teen Ink

The Things They Carried by Tim O'Brien

In the book The Things They Carried by Tim O'Brien. One of my favorite stories in the book is "Sweetheart of the Song Tra Bong". It is my favorite story because it shows how war can change a person. In this case it would be how Vietnam changed Mary Anne Bell when she goes to Nam (short for Vietnam) to be with her boyfriend Mark Fossie. How her enviroment in Nam was able to change her perspective on her future.
"They would be married, and live in a fine gingerbread house near Lake Erie, and have three healthy yellow-haired children"(O'Brien,90). However, after two weeks in Vietnam Mary Anne's perspective on her future changed, "not necessarily three kid, she'd say. Not necessarily a house on Lake Erie."Naturally we'll still get married" She'd tell him, "bit doesn't have to be right away"(O'Brien, 94). Which highlights the fact that enviroment cna play a role on a person's mindset on certain topics pertaining to life.

My second favorite story in The Things They Carried is "The Things They Carried" because it shows how easily you can get distracted while doing your job in a war zone, especially when you are missing somebody who is back in the States. "Lieutenant Cross gazed at the tunnel. But he was not there. He was buried with Martha under the white sand at the Jersey Shore(O'Brien,11). However, once Cross realizes the photos were causing a distraction from his job. "On the morning after Ted Lavender died, First Lieutenant Cross crouched at the bottom of the foxhole and burned Martha's letters"(O'Brien,22). Which showed he was only going to focus on the task at hand from that point forward 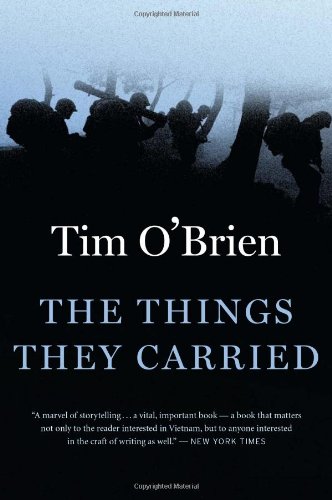