Favorite Quote:
"If you must mount the gallows, give a coin to the headman, a jest to the crowd, and meet the drop with a smile on your lips."

Wizards first rule is a book about a land split into three by magic barriers. These barriers were put into place in order to keep Darken Rahl from taking over the whole world and being a cruel master to everyone.
In the story, Kahlan Amnell is looking for the wizard of the first order, Zeddicus Zu’l Zorander, to pick the Seeker of Truth in order to take on Darken Rahl and save the world.
She gets attacked and saved by Richard, who has to go to Zedd to be healed and it turns out that he is the wizard. The rest of the book is his travels through the midlands in order to stop Darken Rahl from using the boxes of Orden to control life.
It’s a journey that has you on the edge of your seat, eagerly waiting to see what happens next. Plot twists make it a good read and you sometimes don’t even want to put the book down!
It also teaches a few well based beliefs. Such as the wizards first rule that people are stupid. They will believe what the fear is true or what they want to be true. And therefore you can convince almost anyone of anything.
Terry Goodkind did an excellent job of fashioning this world in order to make it believable by the character. He adds strange never before seen things, such as the mud people and how red fruits are poisonous. The story never gets old or boring and there’s enough action to keep anyone entertained. A must read for fantasy lovers around the world. 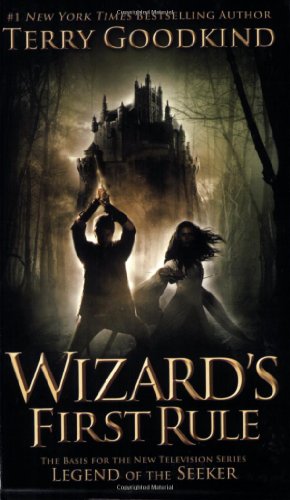 
Buy from Amazon
The author's comments:
Awesome book, i love the whole series!
Post a comment
Submit your own