Of Mice and Men by John Steinbeck | Teen Ink

Of Mice and Men by John Steinbeck

Being Alone in the World

Loneliness, it’s what some people fear the most, and to be alone, to have nobody to talk to, that can haunt somebody’s thoughts. In “Of Mice and Men” by John Steinbeck, he portrays the trait of loneliness and how it can affect a person and change the habit of one person’s personality around others.

That loneliness can get to everybody at one point or another, you could be surrounded by people who care and love you, or even around classmates, and still feel lonely in the sea of people. What would it be like to be alone with no friends to talk t. Or to have no family member to ask for advice when needed. To show how loneliness can affect even women, Curley’s wife is the only women on the ranch, surrounded by all men. To try to cope with her loneliness, she tries talking to the men who work on the ranch, but comes off as flirting with the men. When really, all she really wants is somebody to talk to, even though it’s Lennie. “What kinda harm am I doin’ to you? Seems like they ain’t none of them cares how I gotta live.”(88) To even explain her feelings to somebody, even as oblivous as Lennie is when she talks to him, because he is thinking of the rabbits. When you feel lonely, and have nobody to talk to, the chance to have even the slightest conversation with someone is a chance you’ll grab at and take, but she also lets all her emotions out as well.

Curley’s wife is not the only person on the ranch who goes through loneliness. A man named Crooks is lonely all the time. To show how Crooks lives on the ranch, since he is a different color than the other men, he is living separate in the harness room, which is in the barn.”And he had books too; a tattered dictionary and a mauled copy of the California civil code for 1905.”(67) To keep himself occupied, Crooks does a lot of time reading, just to past away some time. The sense of loneliness affects Crooks’ social skills because he doesn’t have anybody to talk to, just because of the color of his skin.

Loneliness, one thing that some people fear the most, you have nobody to have a companionship with, and not able to share personal experiences or share gossip with nobody, except yourself. Having nobody could drive a person insane, but both Curley’s wife and Crooks tries to mange being alone like they have been doing it all their lives, and they try to think of ways that they can distract themselves just to pass some time away. 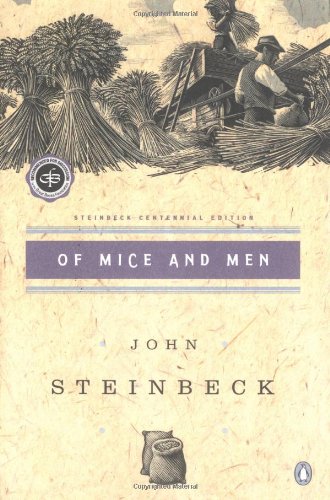 
Buy from Amazon
The author's comments:
to try to achieve the American Dream
Post a comment
Submit your own