Dracula is an intense, gripping book. It follows Jonathan Harker’s journey as he travels around Europe. He goes to Transylvania and stays with the Count Dracula. He finds out certain things about the Count, such as that he is very strong and that he is unusually pale. One night, he finds out that Dracula locks his door at night, and on another, these very pale, beautiful women are about to kill him after he escapes from his room, but Dracula stops them, saying that he was Dracula’s to kill. Jonathan Harker escapes and goes back to England.

He gets engaged to a very kind woman named Mina Murray, and his friend Arthur gets engaged to a girl named Lucy Westenra. Lucy stays with Mina at Jonathan’s house for a while, during which time she sleepwalks, and seems strange. She also has strange marks on her neck. When the doctors, Doctors Seward and Van Helsing, examine her, they slowly put it together. Dr. Seward works at an insane asylum, with a patient named Renfield. All of the men in Dracula love Lucy, and they try to help her as much as they can.
However, she is transforming into a vampire, and the wounds on her neck remain. They try to aid her by placing garlic flowers around her neck, but –in a scene that would be laughable if it wasn’t a result of a character slowly dying—Lucy’s mother removes them each night, and so the Count comes in and takes her blood. She dies, and then becomes a member of the UnDead, also known as vampires. There have also been stories about the “bloofer lady”, who attacks small children and takes their blood. Van Helsing puts it all together and figures out that that lady is Lucy.
They go to where she was buried and kill her, for once and for all. Soon after that happens, Dracula finds Mina, and she almost dies from being in his clutches. She remains alive, though, and is able to help them, as she can see into Dracula’s thoughts. Dr. Seward has been having unusual conversations with Renfield, who makes references to “the Master”, and then Dracula kills Renfield. The men set out to kill Dracula, in an epic hunt, and follow him across boats and through countries. Finally, they are able to do so, and at last, there is peace.
Dracula was an interesting book. For me, it was hard to follow at first, as it is written in an epistolary style. However, I soon got used to it. It was very captivating, as the descriptions were very good. It was also full of action, as well as some romance, plot twists, and an interesting antagonist. As you can probably tell by the long summary, it was a long book. I wished that it could have been shorter, but I felt that it needed most of the information to truly tell the story. I thought that the secondary stories were good. I also thought it was interesting to compare it to the Twilight series, as that is what most people think of as a vampire story. However, Bram Stoker did actually come up with most of the vampire characteristics, contrary to popular belief. Although Dracula wasn’t very interesting as first, the middle and end were very good and very enthralling. Overall, I’d give Dracula four out of five stars, and would recommend it. 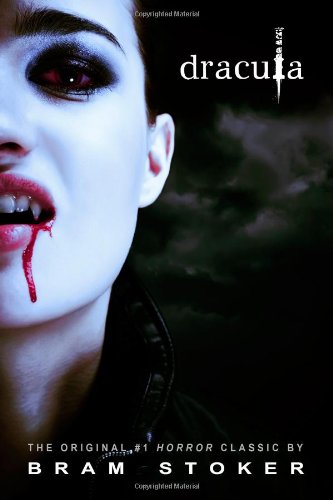