In his masterpiece, Light in August, William Faulkner establishes a luxuriant plot that teems with vivid details by conveying a tragic tone to exude a grave meditation on race, violence and all the fraught legacies of the South. Faulkner educates the reader about obtaining acceptance in society, despite the many obstacles and inconveniences that may prevent one from achieving the goal, by juxtaposing the lives of the main characters; Joe Christmas and Lena Grove. The underlying psychology of these characters, which involve repressed sexuality as well as physical and emotional abuse, was shown to be the building blocks of the story. In compiling his novel, Faulkner uses a “stream-of-consciousness” technique, alternation of syntax, and heavy emphasis on “light” to enter the consciousness of the characters and explain their actions.

In some of his more difficult passages, consisting of dense paragraphs, Faulkner uses a technique called "stream-of-consciousness,” which allows his characters to fall into a trance, in which they perceive more deeply than their conscious minds possibly ever could, by connecting the past and present and reflecting on the meaning of events and on the relationships between them. This technique is effectively applied to Joe Christmas, to assist the reader in making a connection between his determination and his precedent. After seeing Mottstown, he thinks, "And yet I have been further in these seven days than in all the thirty years,...&#39But I have never got outside that circle. I have never broken out of the rings of what I have already done and cannot ever undo" (339). The circle, in which he cites, is the loop of history from when Joe was a derisible child in the orphanage, relentlessly ridiculed for his black heritage, until his conclusion when he stands submissively to let a racist man end his life. Joe was unable to let of the past, which led to a great influence on his present causing him to evade his problems. Thus, he explicitly admits that he cannot undo what he has done.

Further perplexing, is Faulkner's use of extended, elaborate, and ungrammatical sentences. One instance is when Faulkner opens chapter six with the passage “Knows remembers believes a corridor in a big long garbled cold echoing building of dark red brick sootbleakened by more chimneys than its own, set in a grassless cinderstrewnpacked compound surrounded by smoking factory purlieus and enclosed by a ten foot steel-and-wire fence like a penitentiary or a zoo…” (119). This approach often leads to the misunderstanding that Faulkner is careless in writing; when his style, in actuality, was a product of thoughtful deliberation. Nevertheless, the main stylistic achievement lies in Faulkner's ability to capture the essential qualities of his characters through his style. Faulkner freely changes or modulates his style in accordance to the character and subject of matter. In doing so, Faulkner presents chapters containing Lena Grove in the simplest prose and straightforward narration; a type of style that blends with her clear-cut personality. However, the style varies with Hightower, in which Faulkner eliminates the use of dialect and leaves solely narration and episodes, to employ his stream-of-consciousness technique because Hightower goes through a complex examination of his life. For Joe Christmas, Faulkner uses extremely complex detail in addition to the stream-if-consciousness. For example, before he returns to the episode in the orphanage, Joe utters "Memory believes before knowing remembers. Believes longer than recollects, longer than knowing even wonders. Knows remembers believes a corridor . . ."(111). This complexity then suggests the difficulty of returning to the past through the memory.

Overall, the concept of “light” plays an integral part in Faulkner's novel, and emerges as a major theme throughout. "Light" is used in the title of the novel and is chiefly related with ..Lena.. as well, due to her untainted character, to contrast that of Joe's. While "dark" is associated with "Black" or "Female" in the novel, "light" is a symbol of "White" or "Male," the so-called “superiors.” Faulkner believed that late-summer light in the South assumed unique qualities—He refers to these unique properties of light when Hightower revisits his life and his arrival in Jefferson as a young and enthusiastic minister when “That fading copper light would seem almost audible, like a dying yellow fall of trumpets dying into an interval of silence and waiting”(466). The interplay of light and shadow are entangled into many of the novel's lush descriptions.
Hightower, Miss Burder, and Joe are seen as prisoners of the shadow world, tempted by the world of light, of reality, and self-exposure, which exist beyond his mentality. The light in August can only occur in nature, removed the blackness of society and all of its prejudices. As the characters look toward light, they look toward hope of one day being able to be who they really are.

Light in August creates a dismal rendering on the appaling realities of the South to tell the tale of hopeful perseverance in the face of mortality. His characters are trying to get out of this world, but hardly can manage to escape, due to exterior factors, such as racism and violence. Faulkner's work is very unique because its structure presents only gradual revelations of information and consists of three different, but interconnected plot threads between Joe, ..Lena.., and Hightower. He used this technique to dramatize the complexity of life and the difficulty of arriving at truth. The stream-of-consciousness, the bewildering sentences, and the play on light demonstrate an exceptional style that defines Faulkner. Ultimately, Faulkner's style of writing is similar to a maze which pulls the reader through plot twists and into the complex world of his characters. 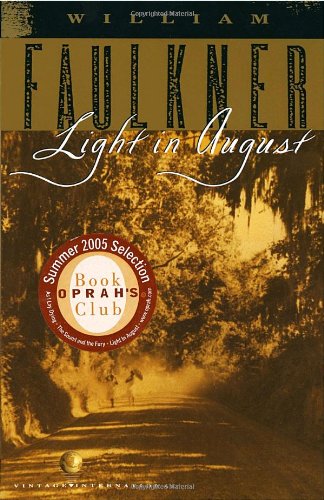