The Tides of Popular Culture

The average North American preschooler has watched 5000 hours of television. Media has taken social values and plastered them across every household and imbedded them in the minds of every individual; a phenomena unparallelled in history. One must understand how society affects the way we see ourselves and each other, because those affects have been multiplied a hundredfold in our culture. One must realize that social values dramatically change over the place of just a few generation. People are encouraged to strive for the new stereotypes and completely abandon reference to the old standards, although the ever changing, exaggerated social objectives in no way reflect how people really believe they should behave or expect others to behave. Society encourages us to constantly change and conform our standards of behavior, while in reality people tend to behave consistently and moderately.

The values of a society can change within a lifetime, and how people view and respond to stereotypes changes with it. In an interview study with a two 60 year old's, one 40 year old, one 20 year old, and one 13 year old, the question was asked, “What are the gender stereotypes?”. The answer was unanimous, men lead and support the family and women follow, advise, and take care of the children. In answer to the question, “How have they changed?”, the older generation commented on how women going to work stressed the family situation, but at the same time the education of women brought more to the table in marriage (Dipietro and Waddell). The older generation claimed the old gender roles as the values of their society, however

when society changed to allow women more roles, they adopted the change as their own reality. They judged the change based on how it would affect the formulaic family unit they grew up with. However living through the social era of divorce and being divorced themselves, influenced them not just to see their old family unit roles as being affected, but considering those roles flawed and needing the correction brought about by social change. Only a generation removed, the 40, 20, and teen age range commented on how gender stereotypes had switched completely, and society depicted men as submissive to women. Both the 40 year old and teen age group agreeing men were portrayed as weak and the 20 year old age group claiming the stereotype was flawed. (deMoura, Sean; deMoura; Angela; Eller, Dara). This age group agreed with the older age group on what the old stereotypes were, however within a few generations, the society no longer could claim those views as their own. The newer generation did not respond to the increasing of woman’s roles since that had already been in work for many years, instead they formed their opinions on what new changes occurred in their lifetimes; the increasingly submissive role of men. Society changes rapidly, and how people interact with the gender stereotypes changes with it.

As influences individuals not only to shift the focus of their opinions, but conform those opinions to current social standards.

As stereotypes change, society mocks old stereotypes, and encourages people to assume they in no way conform or should conform to the old stereotype. A media observation of the television show “Two and a Half men”, the lead character Charlie's friend tells Charlie he wants to do more camping with his son. Charlie, with a bear in hand, asks whether or not he actually knows how to camp, and that even if he did his son only cares about babes on motorcycles. (Two and a Half Men). The men showed a male lead struggling to fulfill a masculine or fatherly stereotype which he has no desire or experience in. The show promotes the idea that old masculine stereotypes like

leading a family have blinded men to who they truly are. They assume the old stereotypes so flawed that no one matched them, and so individuals who do in fact fulfill old masculine stereotypes like a fisherman or outdoors man are mocked since currently discovered realities render them obsolete. A media observation of the show, “Bad Luck Charlie”, noted the scene where the character tries to convince the female character he’s a bad boy, the girl assures him he should really be happy being sensitive, loving person, and then his mom produces the baby blanket he sewed. (Bad Luck Charlie)  Again the male character is assumed to be foolishly defending obsolete masculinity; when in the real world people want calmer, more sensitive “good” boys. Also females are shown to awaken from old social norms faster than males reflecting both the woman’s right's movement and the movements influence on promoting female leadership. As social norms change, society encourages people to stop conforming to old stereotypes, or else be considered obsolete.

Society pressures us to completely throw off old behavior and take on new responsibilities, but in reality, people live balanced lives with traces of both old and new behaviors blurring together as they age.

Social norms, especially gender stereotypes are not based in reality. A field study observed five boys and three girls in the elementary to high school range at the park, and thirteen males and six females in the twenty to fifty age range at Schwartz coffee. In the first study group, males wore dark colors played sports and communicated more with incoherent sounds and physical activity, whereas the females wore brighter colors, sat down, and conversed on friendships. (Field Study) The younger age group supported the old stereotype of more docile female and more physical male indicating that at least in youth, the changing of social norms does not accurately reflect the consistency of gender behaviors. Also in youth, although society encourages people, especially men, to view classic notions of masculinity as archaic and blunting identity, youth naturally reverts to those purportedly archaic


behaviors. In the second study group, almost every individual wore black, both genders were seen in roles of cooperate responsibility, both played an active role in conversations with the opposite gender. The only observed difference between the too genders was the majority of men and the fact that only women were seen with children. (Field Study) Although people in society have been influenced to see gender stereotypes as completely switched, the reality is that the tables have been balanced with the old stereotypes slightly prevailing. Ideas of masculinity and femininity played very little role in how people behaved in the older age range, no matter who they truly are, instead of pursuing one gender role over an other, the older age range tended to blend the two behaviors, again adhering to the old stereotypes slightly more. Society has promotes an exaggerated and inaccurate view of gender behaviors and tendencies.

Society encourages us to judge ourselves and each other based on ever changing stereotypes while in reality people regularly portray more similar behavior. Stereotypes have flip-flopped in barely three generations. Media mocks old ideas and assumes people live and have lived up to new stereotypes all their lives. In reality people behave more and more similar as they age, and conform less and less to any stereotype especially the new standard. People must be aware of the influence of media and hold on to a more stable and moderate set of expectations lest they be swept away by the tides of popular culture. 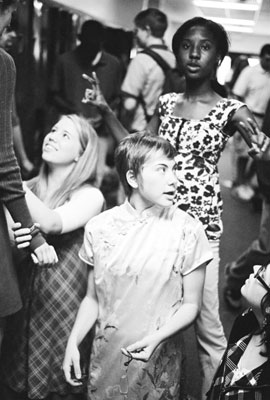 Favorite Quote:
i admire darkness, its so pretty,
i wish i could be pretty like that...