With the attacks onSeptember 11th, it is obvious that our great country will create a memorial forthose lost. But what should that memorial be? One suggestion has been a statue ofthe three firemen raising the flag, but even this idea sparkscontroversy.

Should the memorial be politically correct? It has beensuggested that the faces of the firemen be changed to represent the unity thecountry experienced, meaning the memorial would portray one white, one black andone Hispanic firefighter. Should we do this? Or should we keep it historicallyaccurate?

In my opinion, we should show the moment as it happened. Bychanging the faces, we are changing history. If one really wants to bepolitically correct, then there should be a woman. But that's uncalled for,right? There was no woman helping to raise the flag. But there were noAfrican-Americans or Hispanics raising that flag, either.

It goes withoutsaying that African-Americans and Hispanics died that tragic day. But there werealso women, children, disabled people and many, many others. America is diverse,and always will be. We don't need to change history to know that.

Mythoughts turn to the Iwo Jima Monument. Its image brings a sense of pride andunity to Americans. It represents a very sad, but proud moment in our nation'shistory. The faces show the men who raised that flag on a Japanese island, notjust some artist's interpretation. Because the monument has the faces of thosewho actually experienced that moment in history, it makes us all even prouder tolook at it.

Looking at the faces of someone's interpretation willnever take the place of the look on those three men's faces who put the flag upat Ground Zero.

On September 11, watching all those in New York, I felta great sense of pride, and sadness. To be honest, I forgot to look at the colorof all the heroes. Does that make me less of an American, as opposed to theartist who wants to make the monument politically correct? No, it doesn't, and itshouldn't.

The monument for September 11th should help us remember aday when lives were lost in an insolent attack. But we should also look back withpride, as there has never been a time in our nation's history when we, as acountry, came together and pushed aside racial barriers. Changing the faces on amonument not only changes history (thus changing our memory of that day) but alsothe sense of pride as a result of that day - the realization that for once, racedidn't matter. 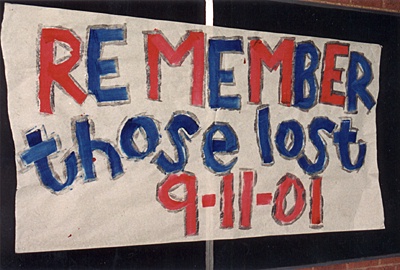