Shooting for the Goal | Teen Ink

Shooting for the Goal

Favorite Quote:
"If you love life, don't waste time, for time is what life is
made up of."

I'm not a very bold person. Not really an aggressive, hard-hitting kind of girl. Or so I thought.

My first year of high school, I had a pretty full plate. I was taking all honors classes, played varsity golf, was a member of every student organization in existence.... so when my friend Genesis asked me to try out for the Boys' Varsity Soccer Team, I kind of blew her off. Me? Play with all those big, buff, soccer-crazed muchachos? Puh-lease. She begged and pleaded for a week. "You don't have to stay on the team, just do the tryouts with me... PLEASE! It'll be fun! I'm only asking you because its the guys' team. If we had a girls' team, I could do it on my own."

Golf season didn't really start for a couple months and maybe the tryouts would be a good way to get more in shape. I brought up the idea to my mom and a few of my friends – and they laughed. My friends thought it was a crazy idea and I wouldn't go through with it. My mom told me I would get pummeled. My boyfriend questioned my motives. I think everyone's lack of faith in me is what pushed me over the edge. What did I have to lose? (besides a kneecap, my mom would point out)

Walking to the practice field on the day of tryouts, the magnitude of what I was doing hit me. I knew NOTHING about soccer. I had never played Soccer for Tots or on any of those little kid teams. I had never watched a game. And I was trying out for the Varsity Boys' Team? I almost turned right back around.

I sat down in the bleachers and looked around. There were probably 40 guys there. And they were looking at me, smirking. I didn't let their doubt phase me as I continued my glance-over. Seven other girls were also trying out, too. This put me at ease... at least a little.

The coach began to explain what tryouts would consist of, and while there was a collective groan from the returning guys when he said we wouldn't be TOUCHING a ball for 2 weeks, I breathed a sigh of relief. I didn't even know the proper way to kick!

Those next two weeks were some of the most grueling, challenging weeks of my life. Every day we ran. And ran, and ran, and ran. Then we ran some more. And a little more for good measure.
We ran sprints across the football field, snakes, bleachers, then ended with 2 miles each day. I remember when Genesis just stopped running. I yelled for her to keep going, but she had reached that point. For a split second, I though “I've done what she asked me to do. I stayed by her side through tryouts. I can be done.” But I left that thought in my dust as I kept running.

I had never run so much in my life. I watched as one by one, the girls fell away like leaves in the fall. Every time I saw a girl walk out of a drill, it pushed me to keep running. To prove to myself before anyone else that I was as capable as those guys. I saw their respect for me grow, and that motivated me too.

By the end of those two weeks, I was the only girl left, along with about 25 guys. Those same guys who had smirked at me and doubted me now had a glint of respect in their eye. I was the first girl to ever be a player on the Mexia High School Boys' Varsity Soccer Team. That is one of my proudest accomplishments.

When we began doing drills with the soccer ball, I embarrassed myself pretty frequently. Fortunately, my friend Ozzy took me under his wing and helped me along by giving me tips and showing me how to improve. All of the guys did, really.

When the season really started, I found myself on the bench more than on the field, but I took that opportunity to watch my teammates. I would ask them later, on the bus, to explain certain rules I didn't understand. They would teach me tricks and give me tips on passing and shooting.

When I WAS on the field I was pretty timid. I didn't want to mess up, to do anything that would keep us from winning. But as the season progressed, I became bold. I found that being a girl worked to my advantage. Some guys would hit on me or ask for my number- while they were paying attention to me, I'd find chances to steal the ball. Other guys would make fun of me, tell me that I suck. I learned to block them out and focus on the game. Best of all though, a lot of guys I was up against didn't want to hit a girl or even guard or block me – so all I had to do was get the ball and get in shooting range.
I started taking chances and playing to win.

I remember being up against this gynormous guy. He looked like a 25 year old grown man, easily 200 pounds, 6 feet tall. I stole the ball and knocked him down. I fell too, but it was beyond worth it. The guys all congratulated me and cheered for me like I had scored the winning goal.

If a guy from an opposing team knocked me down, my teammates would come to my aid every time, yelling at the guy and watching him like a hawk for the rest of the game. They were like brothers to me, protective and willing to do whatever to help me. I've referred to them as “my guys” many-a-time.

I didn't score a goal that year, but I had an assist early on in one of the first games. It was the greatest feeling! That adrenaline kept me going for the rest of the game and carried into practice for weeks after.


This silly quest I set out to do turned into so much more. I fell in love with the game. I wasn't amazing by any means, but I wanted it. I wanted it more than anything I'd ever wanted. That season taught me so much. To fight for what I want even if people don't believe in me. To keep running. To take risks. To believe in myself. 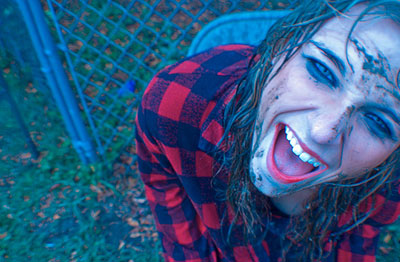 The author's comments:
I moved last year and the school I go to now doesn't have ANY kind of soccer team - girls, guys or co-ed. I've talked to the Athletic Director about trying to start one, but he basically told me its not happening. I'm not giving up though! They added a PE soccer class this year, which is a step in the right direction! It sucks that I don't get to play the sport I love my senior year, but I'm still gonna fight for the kids younger than me, so they have the opportunity to experience the sport that changed my life :)
Post a comment
Submit your own

Favorite Quote:
"If you love life, don't waste time, for time is what life is
made up of."

Favorite Quote:
Writers are a less dangerous version of the career criminal. Everywhere they go, they see the potential for the perfect crime. The difference is that writers have better self control.