The Way of a Cherokee | Teen Ink

The Way of a Cherokee MAG

I don’t remember much before the time I lived in Shelby, Montana, with my grandparents – which is probably why I always think I spent the first five years of my life there when in truth it was really only two. Still, even those memories have been scattered with the mountain wind and aged over the years.

I remember the hill beside my grandparents’ house. (Actually it was a doublewide trailer on a plot of 20 acres that my mom used to say “could be 50 if it was stretched and rolled out flat.”) I remember a time before the land was planted with trees, before it was fenced, when it was wild mountain country. Mud piled at the base of the slope, forming a wide berth of bog that was a deathtrap to any human who walked through it.

When I was six and my youngest sister, Sierra, was four, we would sit on the floor at Grandpa’s feet and listen as he weaved tales about the wild prairie deer that would come across the hill if one knew when to look. Sierra and I were young tribal warriors sitting before the imaginary fires and listening to dreams that danced around the room in the smoke. The wise and mighty chieftain sat before us – ancient and proud – his eyes gleaming with youth, his words entrapping us in the world of the springing deer.

We wanted to see them.

Sierra and I pulled on our boots. It had rained for the past week, and the birthing liquid of the land had impregnated the Mother; she was ready to start a new life. My boots were dusty black with vivid blue trim featuring the icons of my young life – Batman and Robin. The two Gotham City ­saviors took my breath away, and even to this day I admire their daring and capacity to care for the people of Gotham.

Together, we marched up the hill to catch a glimpse of the white-tailed deer Grandpa had told us about. We avoided the bog at the base and bounced with pent-up excitement as we climbed without a trail to follow. In our imaginations we could already see the fluffy flags of the does, the white spots of the fawns, the towering antlers of the bucks. They danced in our minds to the beat of a drum and the song of a flute without seeing us. If they saw us, these rare and shy creatures would fly away and we would be left with only a taste of what they were like.

For a long time we kept a silent vigil, picking a spot on the crest of the hill that overlooked miles upon miles of empty wasteland to some, dreamland to us. ­After a half hour, most children get bored and restless, but Sierra and I were different. The only movement we made for several hours was to sit down with our legs crossed – “crisscross applesauce” my kindergarten teacher would say, “the way of a Cherokee” my grandpa called it. We liked Grandpa’s way better. Cherokee was in our blood; applesauce was not.

Several hours after we began our lookout, hunger settled in our bellies like a ravenous beast craving the heart of a buffalo. We had seen no deer, none of those splendid white-tailed folk we’d heard so much about. We wanted to wait until we saw one of those graceful beings dance past, but finally we could stand it no longer. Our starvation drew us to the house as a metal trap beckons to the red fox too curious for his own good.

Sierra and I glanced at each other and without words vowed to dine on a quick lunch and dash back to resume our watch. We stood and woke our sleeping muscles, stretching tired limbs until they were ready for use. I took a quick look around, drinking it all in. The hills, the plains, the cloudless Montana sky, my home, my land: I would belong nowhere else.

Although Sierra and I had avoided the bog going up, we trudged right through it on our way back. It lapped at our ankles, drank in the sweet nectar of our energy, chewed us up but wouldn’t spit us out. We struggled and Sierra managed to break free, but I was trapped, my foot stuck hard and fast.

The bog made sick squishing noises as I tried to pull my boot out, but it was caught and the bog wouldn’t let go. Sierra laughed before she sobered up enough to fetch Grandpa. We both knew the wise man could get me loose.

So I stood and waited patiently, pondering how to get myself out of the mud. I almost fell in the process, and I recaptured my balance to discover my foot hanging above the trapped boot, the sock dirty and foot tingling.

When Sierra finally appeared with Grandpa looking like an old cowboy with his gray Western hat, dusty brown boots, work-faded jeans, and red plaid shirt, I was just coming out of the bog. With that crooked smile of his, Grandpa traversed the bog, stepping lightly in certain spots and finding balance on the mud rather than in it. He bent slowly, took hold of my boot, twisted it left once, right once, and plucked it out of the mud like a ripe apple from a wild tree.

He was a cowboy. He was a chief. He was a Cherokee. Grandpa was a wise man.

Sierra and I are older now. Grandpa left us in 2003, but something about the “Spirit Dreams” CD by Thomas Walker brought the jolt of memory back – a memory of my grandpa’s tales and the adventure ­Sierra and I went on to discover their truth.

By the way, deer really are rare and shy creatures, and they do dance past quickly if you know when to look. 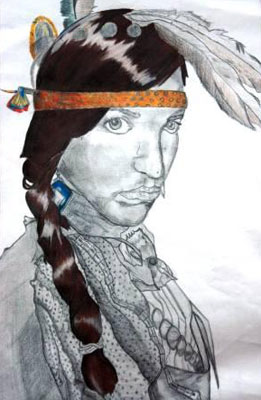 This article has 31 comments.

Favorite Quote:
"If I knew where poems came from, I'd go there"

Favorite Quote:
"Sometimes people leave you...halfway through The Wood. Do not let it grieve you...No one leaves for good. You are not alone, for no one is alone." -Into The Woods

View profile
I'm cherokee and I dance at powwows and I think this piece displays amazing cherokee culture! Thanks so much! PROUD TO BE CHEROKEE!
firelord SILVER said...
on Jun. 7 2011 at 2:52 pm
firelord SILVER, Queensbury, New York
8 articles 0 photos 22 comments

Favorite Quote:
"Two roads diverged in a wood, and I- I took the one less travelled by, and that has made all the difference." -Robert Frost

View profile
I absolutely love Native American culture. All of it. I am a but myself, and animism and kindess/compassion are my code of conduct/way of life. Especially the words written in the song "Colors of the Wind" from Pocahontas. True words from Mother Earth :)
Ehwaz11 BRONZE said...
on May. 16 2011 at 1:15 pm
Ehwaz11 BRONZE, Hopkinton, New Hampshire
4 articles 0 photos 17 comments

Favorite Quote:
"It's important to remember that we all have magic inside us."
- J.K. Rowling
“Oh, dead man, you’re dead wrong,” I tell him. “The world goes on stupid and brutal, but I do not. Can’t you see? I do not.” -Andi Alpers, Jennifer Donnelly

"Cherokee was in our blood; applesauce was not."

I loved this line especially-a great story about heritage and home and family. Excellent!

Favorite Quote:
"Sucess is how high you bounce when you hit the ground"

View profile
I absolutely loved it. I am part Cherokee(don't know how much becuz it's on both sides) and I love reading more about my heritage becuz it reminds me how intelligent and amazing my people were. The readings of Cherokees incourage me to do my best and make them proud of me. This piece has taken me back to my roots and reminded me that I need to get to know my ancestors better. I mean c'mon, how am I gonna make them proud if I don't know them, right?
sadie-blackangel PLATINUM said...
on Apr. 17 2011 at 4:11 am
sadie-blackangel PLATINUM, Newberg, Oregon
20 articles 0 photos 5 comments

Favorite Quote:
I am who I am, Your approval isnt needed

Favorite Quote:
"Let us step into the night and pursue that flighty temptress, adventure."
-- JK Rowling

View profile
Beautiful.  My father is half-Cherokee-- I'm a fourth-- but we've never really talked about it, except occasionally when people point it out.  This piece makes me wish I knew more about my grandfather's people's culture.  I love the part where you write, 'Cherokee was in our blood; applesauce wasn't.'  Altogether brilliant. :)
Swissie said...
on Mar. 11 2011 at 11:32 am
That is a very good picture.
echome94 PLATINUM said...
on Jan. 4 2011 at 7:41 pm
echome94 PLATINUM, Daleville, Virginia
32 articles 3 photos 46 comments

Favorite Quote:
When the world around me ceases to exist and then i will open up and let a cruel man like you in

View profile
This is beautiful i am 1/4 cherokee and 3/4 irish. I am proud of both sides but love reading about the cherokee more. My grandfather is a would be cheif, but now they elect the cheif instead of goin by blood lines. I love how you spoke of the deer. They are beautiful creatures, and when they run it does look like dancing.
LaurenE. PLATINUM said...
on Dec. 15 2010 at 3:10 pm
LaurenE. PLATINUM, Nashville, Tennessee
26 articles 19 photos 50 comments

Favorite Quote:
Two woods diverge in a yellow wood, and I- I took the one less traveled. And it has made all the difference. -Robert Frost

View profile
Great job. I love reading stories and books about Indians, the almost lost culture is intising and captivates me more than any subject I know. I instantly have a greater respect for authors who can write good indian stories. You my friend, are one of those. My favorite line in the whole passage 'Cherokee was in our blood; applesauce was not.' fantastic, funny, innocent, delightful. Keep it up.
SkyDeer PLATINUM said...
on Nov. 22 2010 at 7:27 pm
SkyDeer PLATINUM, Mebane, North Carolina
20 articles 19 photos 49 comments

Favorite Quote:
Respect the nerds, they will be your boss someday- The Computer Guy.
The best is yet to come and baby won't it be fine- A band.
Defiant is the best word in the dictionary!

Favorite Quote:
"Come fairies take me out of this dull world, for I would ride with you upon the wind and dance upon the mountains like a flame.".... W.B. Yeats.
"Flying is learning how to throw yourself at the ground and miss." - Douglas Adams

View profile
This was artifully created. You had great imagery come through your descriptions as well as it having a great sentimental value. Amazing! Keep it up.(:
Atticus SILVER said...
on Jul. 30 2010 at 12:07 pm
Atticus SILVER, Wenatchee, Washington
6 articles 0 photos 8 comments

Favorite Quote:
She deserves to be written~

View profile
Very beautifully done. I could picture everything you wrote and could easily relate to the story. I love the mountains and the valley that I live in.