How many people out there know blind people? How many are related to a blind man or woman? How many people can say their grandfather was the first blind mayor of the city of Woodhaven?
I guess only my cousins and i can say that, unless there is another Woodhaven in some far off place i don't know about. My point is what made this possible. I can't possibly say my grandpa would be sitting on the couch for the past 20-something years without his leader dogs, but having them definitely impacted his life, as well as mine.
Leader Dogs for the Blind is talked about highly. A non-profit organization dedicated to helping the blind men and women of the United States, it has won charity awards, and helped graduate more than 14,000 leader dogs and their happy owners absolutely free to the blind persons. We've all heard that side of the story, however. This, this is MY side of the story.
I was born about a month after my grandpa's first leader dog, Bubba, had been put to sleep, but i have only heard the best about that dog. My best buddy, Willis, is the dog i grew up with. Loyally he would take my grandpa to church, the pastor's loud sermons not bothering him in the slightest, even when my grandparents got their spots in the very front row. He would lie there and let me pet him, put my head on his chest like a pillow, be the dog i never had.
He was always mellow-mannered, but defiantly a runner. I always laughed hearing the story of how he got out one day while my grandpa was out in the woods at his cabin. He chased a rabbit all around the club! It was not until his recent years that his hips went bad. I knew how he felt, wanting to run, but not being able to, me having asthma.
My grandpa would take him in to the school, and i would stand there proudly in front of the class and introduce him. Willis would show off, my grandpa would talk, then, Willis' favorite part, the harness would come off, and he would walk around the room getting love and kisses and petting. Everyone always asked about Willis after that. Especially one loyal friend that always asked, how is Willis? Your grandpa? and it always ended in; Willie is so cute!
Willie grew old, always 3 years older than me. He still wanted to run, to play, to be a puppy. He was now a retired leader dog. He would sit there and let my little pup play on him like a jungle gym. In the summer, he would huff and puff and never want to go outside into the heat. In the winter, he rolled in the snow and dead leaves. Soon enough, too soon, he was just a memory. He still is. Willie passed in the past year, and will always be in my heart.
Leader Dogs has helped my grandpa, given me a good friend, and will improve the lives of many more to come. Anyone out there with a Willis in my life, cherish it, those dogs are a gift from above. 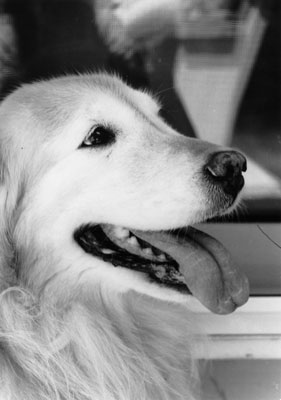