“Mr. Miller?” I said as I walked into Room 207, nervously clutching my paper with both hands as I pushed the door open with my foot.

Mr. Miller turned around slowly, with the composure of a well-trained fighter. It didn't matter that he was two inches shorter than I was or that he had been my tenth-grade English teacher for only a few months; I was still intimidated by him.

“Good afternoon, Samantha,” he said, finally ­acknowledging my presence even though I had been standing there for well over a minute. He leisurely walked toward me, his stern, black eyes glancing at the paper I held in my hands. “Is that your thesis paper?”

“Ye-yes,” I stammered. “You said that you wanted to meet with anyone who had finished their paper in order to make edits.” He wordlessly took the wrinkled paper and looked at it.

“Please, take a seat,” he said, motioning toward a circular table with two chairs. I sat, gripping both sides with my sweaty palms, and watched him get his red pen from his desk.

Up until the moment Mr. Miller began reading my paper, I was confident of my writing ability. Ever since kindergarten, I had been one of the top writers in my class; my punctuation, grammar, and spelling were always correct, and I wrote with a sophisticated vocabulary. But there was something about the way Mr. Miller looked at my paper, his face completely expressionless, that made me feel like I had just handed him my second-grade report on my favorite Judy Blume book.

The reality was I had written a fine paper on the significance of the word “nothing” in a novel we were reading in class: a standard essay, with a thesis question, support, and a conclusion all clearly stated in just under five pages. But even a flawlessly written essay could not escape that stony glare.

He uncapped his pen and started writing nearly illegible notes in the margins of my paper. The red ink looked incredibly menacing against the black and white print, as if he were slashing my paper and leaving it to bleed to death. He didn't write much, but when he was done, he wrote two words very clearly at the bottom of my last page: “So what?”

“Well, Samantha,” Mr. Miller said, “it's an ‘A' paper technically.” I sighed with relief, but I could tell he wasn't finished. “But why did you write this paper?”

“Because you told me to write a paper,” I answered as honestly as I could. “To get an ‘A' in your class, I suppose,” I added jokingly.

Mr. Miller furrowed his brow and pursed his lips; he really didn't like that. “Samantha,” he said with a new gravity in his voice, “real writers don't write to get good grades. Real writers write because they're passionate about something. They write because they want to learn, and then teach others what they learned.” He placed my paper on the table and slid it toward me with disdain. “Only real writers pass my class,” he finished.

I sat there, humiliated and unsure of what to do. He had figuratively ripped my paper to shreds, and on top of that, insulted my abilities as a writer. When I looked back up, he had already busied himself with other things, more important than this pathetic excuse for a student. Finally, I gathered my things, including my inadequate paper, and left.

I spent that entire night at my computer, desperately trying to find some way to become a “real writer.” I reread the book, scrapped entire sections of my essay, and edited draft after draft. Nothing seemed to be working; I was ready to turn in my original piece and take the failing grade.

Finally at midnight, after three cups of coffee, it dawned on me: maybe, in the end, I wasn't supposed to fully understand my thesis. Perhaps my typical five-page paper was just my way of getting the job done with the least amount of effort. I hadn't really looked into the text for the subliminal messages, I'd just used the obvious quotes. Even worse, I hadn't really looked into myself. What did my thesis mean to me? What did I learn? So what?

I couldn't help but smile as I looked at those last two words scrawled in red ink at the bottom of my first draft, the elation of my epiphany filling me to the fingertips. I deleted my entire paper and started again, more eager to write than I had been the entire night.

“Mr. Miller?” I said as I walked through the door to his room. Once again, Mr. Miller turned to me with slow deliberateness, still looking more like a judo instructor than a tenth-grade English teacher.

“Mr. Miller, I'm here for another writing meeting,” I stated with twice as much confidence as the day before. He nodded toward the same chair, and I placed the new paper in front of him. He took the red pen from his drawer and sat down.

This time, though, he didn't immediately uncap his pen. Instead, he put it next to him as he read. He read without showing any expression, as I expected. But this time when he finished, he looked at me with a newfound respect.

“Samantha,” he asked, “why did you write this paper?”

“I write to learn, Mr. Miller,” I said with pride in my accomplishment. “That's what real writers do, after all.” 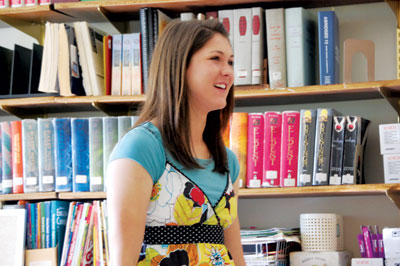 PhototopiaChild BRONZE said...
on May. 6 2011 at 9:30 pm
PhototopiaChild BRONZE, Sterling, Virginia
1 article 4 photos 7 comments
View profile
I love this article with a passion. You have natural talent for writing. Great Job.
Word!Smith BRONZE said...
on Apr. 9 2010 at 5:05 pm
Word!Smith BRONZE, Pinehurst, Texas
2 articles 5 photos 1 comment
View profile
I absolutely loved this article. Loved it! That's what a real writer is, he's absolutely right. This was an amazing story. I'm, like, proud of you even though I don't know you. xD How silly. <3 Keep it up, rockstar.
Saudade_indigo PLATINUM said...
on Apr. 4 2010 at 1:51 pm
Saudade_indigo PLATINUM, Winnipeg, Other
21 articles 0 photos 17 comments
View profile
I love it. This sounds exactly like my English teacher, who is also my favourite teacher. Funny how the teachers that make you feel the worst are the ones you remember and love the most.
sophietle BRONZE said...
on Dec. 28 2009 at 1:12 pm
sophietle BRONZE, Houston, Texas
4 articles 3 photos 33 comments

View profile
Perfect job on portraying the enigmatic English teacher. Well-written, totally true, and brings back a lot of memories!
NativeWriter GOLD said...
on Dec. 25 2009 at 12:47 pm
NativeWriter GOLD, Santa Rosa, California
14 articles 0 photos 16 comments
View profile
Your story is exactly the truth writers should write do to pashion not because they are told to. By, Ntive Writer