At it again, high school sophomore Justin Chevitz has robustly streamlined yet another everyday task in a product that will bring convenience to families for years to come.

Last year, we interviewed Chevitz for our  short lived, one issue  “Student of the Week” column.
(The article can be found  here)

In our time with him over the past two years, we’ve learned more about Chevitz’s background, his love for Bugles snack products, rural little league baseball,  cushy armchairs, and actor Vince Vaughn. A well known Vaughn fanatic across the world wide web, Chevitz’s bedroom, where the exclusive interview featured below took place, is covered from corner to corner will Vaughn memorabilia, complete with blackout, Vaughn stickered curtains.
An internet phenom  last year for his revolutionary “My Heart Will Go On” button that streamlined a tedious part of life for Titanic fans, Chevitz has struck gold again with the Vince Vaughn Age Calculator.


The device is as simple as it sounds-- it takes the complicated and inconsistent process of keeping up to date on the actor’s age, and puts it into an easy to operate, mobile apparatus, akin to a common numerical calculator. With annual low-cost firmware updates, the VV-AC will never need replaced!


We were glad to have the time to sit down with Chevitz, and learn more about his exciting new product. When asked what his favorite part of the new product he had created was, Chevitz eagerly replied,- “It’s the colors! ”  “I love the color scheme. Although it’s really the least relevant to functionality or practicality, I don’t think I’d be happy with it if it weren’t for the brilliant orange color.”


(If you’d like to have the color for yourself for say, the garage door, or bathroom walls you can find it with the hex code #FF8A4D)


Chevitz spent nearly 20 minutes detailing the color choice, keeping me on the edge of my seat the whole time anticipating what his next move could be in deciding on the myriad of color options he had initially planned on offering.


“I just really felt like it was the only way I felt comfortable offering the product to the public. I couldn’t let such a fantastic feature be under shown by shoddtty design or cheap build, or hard-on the eyes aesthetics. I had a big name to live up to!”


And big shoes he did fill. Having already pre-sold the four limited demo units, Chevitz is scrambling to handle the amount of orders being placed for his design.


In our next issue, we hope to follow up with Chevitz, as he expands his business to accommodate larger production numbers and satisfy the masses with his revolutionary products. 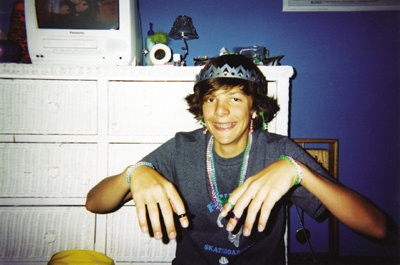