Smoke covered the sky like a thick blanket. People ran around trying to calm everyone down. Neighbors looked from the sidewalk across the street. Some with looks of worry and others with curiosity. Timmy ran from person to person looking for his mother and father. His brother had been rushed to the hospital because of the severe burns on his face, hands, and legs. His sister had ran to her friend’s house as soon as she was out the house. He was the only one who had stuck around. Finally he spotted his mother lying on the grass. He quickly ran over to her and took her hand. Her finger twitched and Timmy knew she was okay. “Mommy I am sorry. I didn’t mean for it to happen.” he said crying. His mother’s face was covered with burns. Some worst than others. Even the hand he was holding was blistered and black. Timmy put it down. Half of her hair was burned off. He stroked her burned face and sang a song she had sung to him when he couldn’t sleep. “Kid it’s useless to do that.” someone said. Timmy jumped and looked behind him. A paramedic with a plastic bag was standing behind him. “W-w-what do you mean?” Timmy asked stuttering. “She’s a dead woman. She died of smoke in her lungs.” he explained. He laid the plastic bag next to her and started opening it. Once Timmy realized what he was going to do he lash out at the man. He scratched his face screaming. “Help! Someone control the kid!” the man shouted protecting his face. Hands pulled Timmy away from the man and to the curb where someone put a cup of cider into his hands. “Timothy, you must calm down.” a voice said to him. Timmy looked up already knowing who it was. Only his father called him by his whole name. “But dad, they are trying to put mom into a bag. She isn’t dead! Her finger moved!” he said his voice getting higher with every word. People looked over at him with sad faces and with looks of sorrow. “Timothy please calm yourself.” his father said grinding his teeth together. “Do you even care?” “She was my wife. Of course I care.” his father replied in a whisper.


“Timothy, how do you feel about being here?” the shrink asked looking at him. Her glasses made her pupils look bigger than they really were. “It’s Timmy.” he corrected. The woman shifted her weight in her chair and pursed her lips, waiting for an answer that wasn’t coming. “Timmy, you have to tell me something.” she said giving up. “What happened that day?” she asked. Timmy crossed his arms and focused on the speeding cars outside the window. He imagined that he was in one with his mom, brother, sister, and dad. They were going to their grandparent’s house. “Timmy, Timothy?” the shrink called out. “You ha….” “I was in my room. I was playing with matches. I lit a piece of paper and blew it out then lit it again. My mom called for lunch so I blew it out again and threw it in my trashcan. Then I went to eat dinner. While we were eating my mom went upstairs to get her phone. By that time the flame had moved into the hallway and it was blocking her way to exit. I ran out the house with my dad but my brother was in his room and got severe burns. My sister got out someway without any burns though. I killed my mom.” he said, his lips quivering. The shrink looked at him. Timmy wiped his eyes and sat back in his seat deciding not to say anything more.

“Timmy, Timmy, Timmy.” someone called. He looked up to see his teacher with a look of annoyance on her face. “Timmy, stop daydreaming. Your mom is here to get you.” she said. “My mom, but my mom is dead.” he replied packing his stuff up. He walked to the office, trying to figure out how his mom would be here. He opened the office door and saw a woman turned around tying her shoe. “Mom?” he asked. The woman turned and the woman turned into his mom. “Mom!” he shouted and ran to hug her. “Tim you saw me this morning.” she said laughing. “I thought you were dead!” he wailed starting to cry. “Honey why would you ever think that?” she asked. By then everyone in the office was watching them. “Were you daydreaming in class again?” she asked. “I guess so mommy.” he replied still hugging her.

“Doctor, he is remembering.” his mother whispered into her phone. “He thought I was dead. I convinced him that it was a daydream but I don’t want him having those dreams again. We made him forget his mom for a reason.” 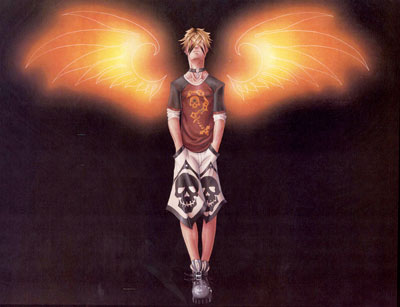 The author's comments:
My friend gave me the idea when we did a English project.
Post a comment
Submit your own

Favorite Quote:
"Let's tell young people the best books are yet to be written; the best painting, the best government, the best of everything is yet to be done by them."
-John Erslcine

Favorite Quote:
"Don't let the fear of striking out keep keep you from playing the game."

Favorite Quote:
"it's impossible to live without failing at something, unless you live so cautiously that you might has well not have lived at all-in which case you fail by default."
-J.K.Rowling

View profile
wow this is so great!  I love how you twisted the ending a few times!  The story was awesome!! would you mind commenting on some of my work?
Celesse BRONZE said...
on Jul. 2 2012 at 8:57 am
Celesse BRONZE, Danville, Indiana
4 articles 0 photos 3 comments

Favorite Quote:
"A person who has never made a mistake never tried anything new." ~ Albert Einstein
"I am the wisest man alive, for I know one thing, and that is that I know nothing." ~ Socrates

View profile
I love teh ending of the story it just changes the whole mood. If you write more I would love to see how it progresss, but i understsnd if that is the intended ending.