Plane Ticket for a Mr. Ghost!

He woke up, felling quite lightheaded, on a park bench. He looked around, wondering how he'd gotten there. He knew the place, a pretty nice wooded park a couple of blocks from his house. He tried to think back to the night before. He'd gone to Bill's party...now that they were both the legal age of twenty-one, the parties really got kicked up a notch. Well, he'd driven out to Bill's house in the city, had a few drinks and a good time, then come back. Wait....he felt a little itch at the back of his brain; something else had happened that night. He tried to think harder, what had happened? He remembered some screeching trees, a bright light...nohting. He groaned, pushing himself to his feet. Whatever had happened, he should get home. His current girlfriend-in-residence, Molly, would be worried.

That's when it hit him. Halfway through pushing himself up, his hands had gone through the bench!!! He jumped up, and they pulled free instantly. He went closer to the bench. Nope, no holes...he put his hand on the wood, and pushed. His hand went through the wood as if the bench was made of jell-o. He yanked his hand out of the wood, and stared at it. It looked fine, completely normal...wait... He squinted, something wasn't right. He could see through his hand! The dejected ghost slumped back down.

“Oh crap. Molly's gonna kill me.” Then it hit him. “I'm dead, aren't I?” His head turned to a couple of little kids on some swings. “One last test.”

Tom walked slowly over to them, his feet making no sound, when they should've crunched over the mulch. When he got to the kids, Tom stopped, crouching right in front of them. “Hiya.”
None of them seemed to notice, and Tom got two feet in the gut. Except they didn't go in exactly, more like through, before swinging back out. The ghost gulped and instantly got out of swing range.

“Alright, THAT felt weird.” He looked down at his stomach. Nothing, not that he expected anything different. “I guess I am dead.” This talking to himself could be a problem. He sighed.

“Well, I guess insanity's not an issue if I'm not alive. Well, may as well do some traveling now. Since nobody can see me, I might get to go some pretty nice places.” He smiled, the idea shedding some light on the whole 'death' thing. He could watch the Olympics if he wanted, only a couple inches away from the competitors! He could even go to space, it's not like anybody would notice him. His head buzzed with ideas, but he wasn't sure where to go first. “Airport'd probably be a good place to start.” He nodded to himself. “Now...how to get there.” he looked around. He probably couldn't drive...then he heard a honking from the driveway near the park. “Come on honey, we'll miss out flight!” A family of four was all set up in their minivan, a mother hastily putting on makeup before running to the passengers' seat. He smiled. “Bingo.”

A very loud and annoying car ride later, Tom found himself staring up at the list of departures. “Woah...” He hadn't realized how many places he could get form just one spot. That's when a small glitter of something caught his eye. Another person, a woman about his age, dressed in a basic fitted tee and jeans, was looking up at the board, just as flabbergasted as him. He wondered what about her had made him turn...then he realized, he could see through her too! He walked over, not sure what to say.

The lady's head jerked around to where he stood. “You can see me?!?”

She nodded slowly. “I guess so.”

“How long have you been dead?”

She grimaced. “Not sure. I mean, I woke up, if that's what you call it, a couple of hours ago.”

Now it was Tom's turn no nod in surprise. “Me to.”

“Can you remember how you died?”

“Now that's a coincidence, same here. I was just heading home from the mall, when BAM! You're up the tunnel.”

“I was coming back from a party.”

“Wait. I thought I recognized you! Where were you when you crashed?”

Tom he slumped down. Great. Now he was a hit-and-run case. “Ummm, yeah. Sorry about that.”

She shrugged. “Actually, I don't mind too much. I think I was the only one who died, and I didn't really like them much anyways.”

Tom stared at her, completely silent. The girl blushed. “Well, I always wanted to go places, so I figured this was a good time.”

Well,she wasn't spewing into a hissy-fit because he'd killed her. That was a good sign.”Well, where do you wanna go? I mean, I don't have much of a clue right now, and it would be nice to have somebody to talk to.”

She grinned and nodded. “Well, I was thinking Venice first, then all around europe.”

“Maria.” She shook it, then started to grin. “Well, what're you waiting for! The next plane to Venice leaves in half an hour!” Maria grinned and ran ahead of him. “Come on!”

Tom followed, zipping through people. This was certainly going to be an interesting year. 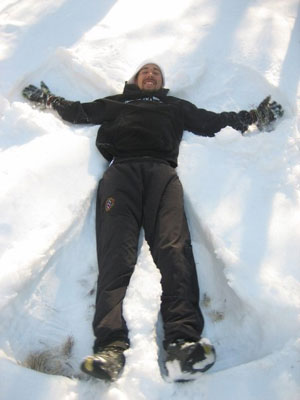 The author's comments:
I started this story at a summer writing camp, but hearing that our assignments weren't allowed to be supernatural, I had to write something else. Now I get to show it off!
Post a comment
Submit your own