The dreams in Valerie’s mind were more vivid than before. They used to be. . .scattered. They would flit into her mind like specters, unbidden. And when they had her attention they would flee, leaving her to chase the curling tendrils of mist; like a memory in the back of her mind that she couldn’t quite retrieve. But now they grew bolder, forcing their way into her thoughts. Night and day they screamed at her: in school, at the mall, as she slept—or rather, didn’t sleep—, the images and voices came in an endless flood of pleas and vitriol. Louder and louder each day without end. They were so loud sometimes she wondered if other people could hear them.

Valerie stared longingly at her bookcase: Markus Zusak, J.K. Rowling, Dickens and Poe looked out imploringly at her, beckoning. But on the voices screamed and so she had room in her head for nothing else. She remember spending endless nighttime hours reading; page after page, book after book, she devoured them. They were loudest at night, when she was free from distractions, but now they words on those well-thumbed pages twisted and blurred nauseatingly. She picked up her backpack, full of homework she couldn’t do, and headed off to school, where she blended with the shadows.

Ms. Crawford walked primly into the classroom, her nose a few steps ahead of her. Her eye shadow was the most wretched shade of blue, and stood so straight she could balance a book on her head as she walked.

Valerie sat hunched in the corner, curled in on herself, trying to shut out the pain as it showed through clearly in every line of her face, and in the depths of her sapphire eyes. Her demeanor was disheveled, weathered. Her shirt was buttoned wrong, hair slightly tangled, and heavy dark circles hung heavy under fever-bright eyes. Her face was ashen and her hands trembled and clenched nervously as her eyes darted around the room like a frightened mouse without really seeing anything. As usual, no one paid much attention to her.

Except for Nicholas Creed. He saw her, and he wondered. He guessed somewhere deep in his heart he could even say he loved her. He tried to send his thoughts to her, little bits of sunshine to help ease her pain, to stop the shivering. It helped some, but he would never know how much his little reassurances meant. And neither would Valerie. All she knew was that the voices were calmer near Nicholas Creed.

‘Nicholas Creed to the office please,’ the intercom crackled like the fires of hell. Indescribable panic swept over Valerie, like the time she almost drowned in the wave pool. She tried to breathe, but she couldn’t see the surface.

Nick stood up, and each step towards the door could be heard clearly above the voices. Everything is fine. The voices weren’t acting up. . .

The door closed and all Hell broke loose. But Valerie was the only one who noticed.

The sun shone brightly and a few wooly white clouds scuttled merrily across the bright blue sky. A gentle breeze was blowing across the meadow; grasses bowed and daisies bobbed their heads jauntily.

A little girl bounded, giggling, through the tall grass. Her frilly pink sundress flourished and waved as the breeze toyed with the edges of the soft fabric. She knelt to pluck some wildflowers. She liked the yellow ones best.

But beneath the happy, tranquil scene Valerie felt unease. Just a vague prickling in her spine at first, but then. . .

An insidious black miasma billowed behind the girl. Valerie heard the voices coming from within the cloud, and a million faces contorted in agony as they screamed. She cried out to the girl, but she couldn’t hear and the black cloud swallowed her up.

“Miss McGaffrey, are you feeling well?”

Valerie looked around. All eyes were trained on her and she realized she’d been screaming aloud. Her throat was sore.

“Yes. . .no? I don’t know.” Her own voice sounded muffled as the voices once again clamored for her attention. She wavered unsteadily in her seat and a trace of real concern showed for but a moment on Ms. Crawford’s cruel face.

“Nicholas, take her to the nurses office please.”

Nicholas. . .she hadn’t noticed his return.

“Everything’s okay,” he said outside the classroom. Her head filled with sunshine.

He held on to her arm as she stumbled drunkenly beside him. At his touch the voices were muted, no louder than the babble of a woodland stream.

“Yes,” she mumbled, “Everything is alright. . .when you’re here.” She didn’t even know what she was saying, she was so caught up in the euphoria of the almost silent voices in her head.

It was some time before Nicholas’s brain could process what she had just said. They walked on in silence as he tried to gain control of his racing heart. His fingers sizzled where they touched her skin.

“If you want, I could come over and help you with the homework after school?”

Valerie sat on the couch and waited with nervous anticipation. The voices were louder at home, but that made the relief would be all the more sweet.

The voices began to lessen, making the knock on the door completely unnecessary. Valerie jumped up and flung opened the door before his knuckles could come down a second time.

“Nicholas! Come in,” she made an effort to look happy and carefree and failed miserably.

“Who cares. We can just sit and talk.”

“Oh,” he said lamely. His head was spinning.

He followed her inside and sat next to her on the couch. Awkward silence. . .

“What did you mean earlier. . .when you said everything was okay when I was there?”

“You make the voices stop,” she said quietly.

“I’m not crazy.” She looked into his eyes and he found it impossible to tear away. “They show me things. People being swallowed up by a huge black cloud!”

She opened her mouth as if to say something else, but he leaned forward and silenced her with a kiss.

The lights flickered and went out as the voices screamed so loud that they flowed into Nicholas’s mind through her lips. They pulled apart.

“You must have blown a fuse or something,” Nicholas said, refusing to believe the screaming he had heard through their brief connection. Valerie reached into a drawer and handed him a flashlight.

He turned it on and ventured into the basement, Valerie trailing close behind.

Nicholas swept the flashlight back and forth across the basement. The light was swallowed up by a huge black cloud that was blacker than the basement around them. Faces whirled inside its murky depths. It reeked like sulfur.

“J**** C*****.” Nicholas swore. Behind him Valerie was paralyzed with fear as a paroxysm of pain wracked her mind.

The thing began to advance slowly. . .

Nicholas hurled a crate at it and shouted. The crate was swallowed up. The flashlight rolled across the floor where it had dropped from his hand, the beam dancing crazily across the walls.

Nicholas remembered how Valerie had told him he made the voices go away. “I think this is where the voices come from!,” he shouted. He hesitated. “And I think I know how to stop it!”

Nicholas dove into the miasma and was swallowed up. The voices changed, and there were rainbows in Valerie’s mind. Nicholas’s goodness suffused the noxious cloud as his soul was absorbed.

The cloud exploded, and the room was suddenly filled with a million souls shrieking toward the sky.

Valerie collapsed, sobbing. And in her head. . .silence. 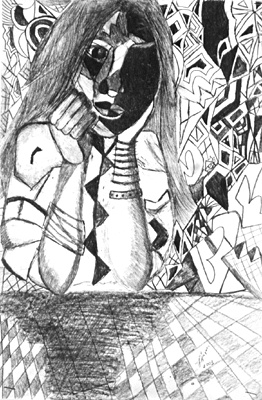 Favorite Quote:
"The greatest thing you'll ever learn is just to love and be loved in return." and my other fav. "The best come to those who wait."

Favorite Quote:
(couldn't think of anything better at the time) "Take the first step in faith. You don't have to see the whole staircase, just take the first step."-Dr.Martin Luther King Jr.

View profile
amazing.amazing.amazing. a little confusing toward the end, basically from the 'blown a fuse' part and down. but i still got the idea and it was still just as entrancing as the rest of the story. i couldn't make myself stop reading. really great job.
starxoxo23 PLATINUM said...
on Jun. 5 2010 at 3:32 pm
starxoxo23 PLATINUM, New Hampshire, New Hampshire
21 articles 0 photos 97 comments

Favorite Quote:
"Three may keep a secret, if two of them are dead." -Benjamin Franklin

View profile
Like ohmygoshsavannah said... that entire time I read I was entirely captivated. It was so sad. What happened to Nicolas??? Did he die? You should write more!!! YAY!!! :D

View profile
This is truly amazing.

The whole time I read I was utterly and entirely captivated.