Kira spread her snowy feathers. She didn't even see them, why would she pay attention to her own wings? She was with them constantly. But others saw them. The other ravens mocked her white plumage. She was different. Her mind spat the word. She was different, they weren't. So she was less than them. She always had been, from the moment her egg cracked open and she fell out into a world of jet feathers. Her parents had stared at her. Her siblings, days, even minutes old knew she was different.

Every second of her existence the oddity hid in the background, changing her in others' eyes. Before she uttered a word they judged her, they thought they knew everything she was, everything they needed to know to decide she wasn't worth their time.

“Hey look! It's milk face!” Arvan cawed a laugh and several others joined him.

“I'm not hurting you.” her voice was quiet. To quiet.

“Aww, hatchling Blanca is shy. Would she like an eggshell to hide it? It would be the one thing she could camouflage too!” he cackled as he departed his mocking hatchling tone.

“Why do you look like a stupid fool?” the ravens around them laughed at Arvan and he swelled with rage.

“Get out of here Kira. nobody likes you. The forest would be better without you.”

The words cut to her soul, but she kept her tough face. “Yeah, get lost. Nobody needs a self-centered jerk, crow.” she hissed. Why didn't they just leave her alone?

“Crow? Crow?! If I'm a crow- you're just a little pigeon, and we don't have space for pigeons here.” he lunged at her before the other ravens could start laughing again. She stepped aside and he flew too far, crashing into a tree. She flew away, ignoring their jeers behind her.

He was right. She should just leave. Nobody wanted her and they made her life miserable. Why hadn't she just been born with black feathers? She swooped down to a stream and started drinking, making the water rise to her with magic, just for fun. She dropped it instantly and glanced around. If anyone else saw her do magic they would beat her up or something. Superstituos old crows.

She heard shouts of fear and confusion behind her and flew to it, concerned. While airborne, she saw red flames lick the sky. Oh no! But… surely now they wouldn't bother her, not in a crisis. Right? She landed in the center of them and they glared at her. What? What had she done?

“Get out and never come back!” Arvan had real fear and fury in his voice.

“Yeah! This is your fault!”

Why was that her fault? Why was she cursed? It wasn't fair! What if… what if she were black like them? She could go to the ashes and cover herself in soot. And then she would change her name, go back, and pretend she had always been normal!

It worked. She was black as night. She couldn't stop cawing with joy. She was going to say her name was Kali, and she was from another forest. She had moved her because… because…. She didn't know why yet. She tried to take a little water over to help with the fire, but it didn't do a thing. Her magic didn't work. She was totally normal now!

The fyre subsided and she flew into the forest. Arvan was there still, with the flock of enemies. Her family wasn't, fortunately. She forced herself to curb an angry defensive look and landed. Everyone turned and… smiled… at her! Well, not smiled, their home just burned down, but it looked to her like smiles. She was accepted!

“Hello.” Arvan said to her. His tone was too flirtatious. She wanted to gag. Unfortunately, he was basically the leader of the flock. He was bound the approach her.

“K-kali.” lying was hard! And it was hard to focus when he was being nice to her.

“So what are you doing here right after a fyre?”

“I wanted to help, but it looks like it's fixed. What happened?”

“A cursed raven happened. She wouldn't leave. We kicked her out and it looks like our luck is changing.” why was he so close? Was this normal?

“Yeah, sure.” he snorted. Maybe it was her fault…

She lived a new life for a few months, regularly bathing in soot, and when she found human pen things in ink. Her magic was gone, but that was ok, she was accepted. But then animals started dying, and water levels fell. It got hotter and dryer, and suddenly they were in the middle of a drought and no one knew what to do.

She hid from the heat in her nest, despite knowing there was no escape. She was so thirsty… all of them were. Somehow, they claimed Kira was back and that was causing the drought. Then again, maybe she was. But she also knew how to fix- no, no she didn't. Not that. She looked up at the cruel sun. noon. She flew off to a meeting.

“Hey, Kali.” Arvan was there with a few others.

“So we’re here to fix the drought?”

“No, we can't. I'll explain more when the others get here.”

Ravens poured in and Arvan started. “The forest is too dry. If we don't leave, we will die. I'm suggesting we migrate to Kalis home forest.”

“I said we should all go to your old forest.”

“Better there than here. But i guess we could go to any forest.”

“No. and we have to leave the weaker ravens behind. Like one old crow, she can barely fly. But we don't need her anyway because she was the white raven i told you abouts' mother” what? No, she couldn't let her family die.

“Alright, we’ll come with you.”

He insisted. She found a dirty puddle, the last water deep enough to clean her feathers in the forest. she waited for sounds of shocked betrayal, but nothing happened.

“So… your epic plan was… to use more water?”

“No! I should…” her feathers were still inky black. She was almost relieved, but no! She needed to do this. She… wanted them back.

The instant she thought that the black fell like sludge from her feathers and there she was again. Herself. She could feel their stares. She turned awkwardly and looked Arvan in the eye.

“I have magic. I can fix it when my feathers are white.”

“Kira?” he breathed. She ignored him and flew past. She found a beaver dam blocking the river. Not for long. She pushed the water until it refused to be contained and saved the forest.

She was standing in the riverbed. She had to, to use her magic. She… she couldn't fly out in time-” his voice cracked. “She… she didn't make it. Her body washed up onshore. Her beautiful feathers that had shone like pearls were broken and ruffled. Her neck was bent backward and flopping around. Blood… blood and water poured out of her mouth. And we left her there. Dead. We spurned her but she saved us all the same. And… and i never gave her peace, white or black or white. I left her there, dead," and under his breath, he whispered, “I'm so sorry…”

Arvan watched little Zara, her eyes wide as he finished the story. She drew her milky wings closer to her body and shuddered. She was Kiras legacy. He would do anything for her.

“I know,” She whispered back, in another voice, one he hadn't heard for a long time. 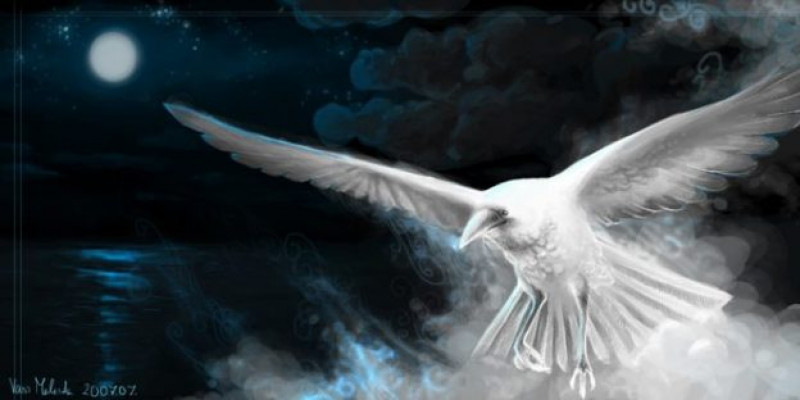 spoiler- she dies(surprise! not like I ever kill characters) actually, I thought there would be a happy ending where she accepted herself, but I guess I don't know myself very well.

also- don't change yourself for others, don't kick others out for being different, and don't try to make people change. and clearly, racism isn't ok. ever. the same red blood is in everyone's veins.

View profile
Great ending! I knew this would be a superb story from the title and I saw you got "twained" several weeks ago, nominated for a writing prize for the very best of TeenInkers.