blackness. all around. under me. above me. darkness. no hint of light. i feel something on my back, a compelling force, pulling me. i turn and see two eyes. like fire, flooded with light, though they didn't share with me, and around them only a tint of the penetrating color. they contort into a menacing shape. maybe a glare. maybe a wicked smile. i cant really tell. i am frozen, captivated by them, staring deeper into the endless blue, losing awareness of everything else until, in a single moment, my world has become those blue eyes.

a cold, terrifying, chilling voice penetrates the abyss and I startle out of the gaze.

"Welcome." to what? and then I realize, I don't know who I am. anything about myself.

"You have questions. Speak." I open my mouth. silence.

"Welcome, Aislin. To my game." what game? is that my name?

"3, 2, 1. let the game, begin!" begin was shouted with such all consuming might I couldn't hep but ignore whatever was about to happen, for preference of complete concentration. until the floor fell, and the darkness lost all matter. i stared back at the eyes, still with me, constantly as i fell, taunting me, laughing at me. they remained in that evil shape. i broke away my gaze and kicked about with all my might, to no avail.

"Tick, tock. if you cant get out soon..." then what? would i hit the bottom with enough force to turn me to dust? no, there was no bottom. there was nothing, except me... and the eyes. i returned my gaze to them, sucked deeper into the endless color. it was something, if only light.

i fell deeper and deeper into those bottomless eyes, leaving an awful laughter behind, spirling into the blue. and then i stopped. i paused and looked about. the window eyes behind me were black, sucking right from this realm of blue. they were raised, as if in surprise. i watched them, suspiciously, breaking contact regularly.

"well then. choose your challenge." what? i tried tospeak, but again, nothing came out. i looked around and saw two doors. one an azure blue, the other a greener hue. i walked to them and reached out with an ethral hand, then hesitated.

i turned, staring at the doors. sea or sky? i knew that was the trouble, somehow. i reached towards the seafoam door, but halted, my hand hovering over it. could i swim in what would certainly be a tempest? i turned and reached toward the other one, but paused. what would that do? i didn't know. i sucked in a breath and shoved open the azure door, eyes shut tight. i opened them to find myself in azure emptyness, except a few clouds. i whirled and saw a mouth, curled upwards in a cruel laugh.

"greetings, again, Aislin. you know what to do. ready?"

"oh well. 1, 2, 3, go!" i gasped softly as i fell thru space, arms flailing. but no good, i didn't have arms. i reached out and clutched with all my nothingness at a cloud. i caught ahold of the mist. it was a nothingness, too. i pulled myself on, and glanced at the mouth, half-opened in surprise. feeling more secure, i stared into it, trying to be sucked within. nothing. i saw another cloud, closer to it. i hoped onto it. i repeatedly jumped across clouds until i reached it. then, i leapt, landing on a tooth.

"white it is." what? i had another choice? should i have landed on another- i stumbled forward and stared around. i wasn't inside a mouth, but in a cave of ivory. across sat a skull. i jumped back in fright.

"ready to move on?" its jaw clacked.

"lets go. turn around." i did as instructed and jumped as i heard more bones clatter beneath me. i stared down at my own skeleton.

"hurry up." i glanced up to see two sockets. eyes. i walked tothem, wincing with every steps awful sound. thru one, i saw a field of daisys. thru the other, an expanse of cream. clearly, the daisys were the right choice. wait- it couldn't be that simple. i turned regretfully from the peaceful meadow.

"it does. but it wont be peaceful inside."

"yes, it will. no tricks. in there, you can rest and forget about these games. no danger, no fear, no traps."

"i wouldn't be able to continue. i would be trapped in your stupid games without caring."

"yes, wouldn't that be so peaceful?"

"have it your way. i don't think cream is easy to swim in, though."

"are there any stairs or ladders?"

"i wonder whats thru the mouth and nose."

"then thats where i want to go." i turned from the cream and searched the room for anything, but found nothing. i walked to the skull, and hesitantly picked it up. under it was a ladder. i carried it to the cream eye and held it out.

"if you drop me in there, I wont be there to transport you, will i?"

"i suppose not. if this is a trick ill make you regret it."

"yes. now lets go down the ladder." i carried it to the ladder and climbed down, calm. i dropped it and looked at the nose holes. thru one was a ring of white fire. that didn't look possible. thru the other, clouds, everywhere. i had bones, now. i couldn't walk on that.

i continued past the ladder, carrying with me the skull, disgusted tho i was. i looked out the mouth. a whiteness. on one side was a white alloy in the shade of a faintly glowing sword. this had to be it. i threw the skull thru and followed, picking up and examining the sword.

"good choice." i turned around with the sword and stared at the skull, emitting red fire. it whoosed at me and i instinctively raised my sword, deflecting it.

"fight." it hissed. i ran at it, clumsily swinging the blade with no power, no muscle. its glow lifted, pulling the sword in the way i tried to go. yes! i swung a few more times until it plunged straight thru the skull. it dropped and the flames grew. the sword disappeared. i reached out and reluctantly touched the red flames licking at me. i appeared in a red placed. a disgusting bulging muscle lay out of reach, like the eyes. i looked at myself, a writhing mess of muscles with hints of white peeking out. i felt strong!

"i cant belive you made it this far. its as if you have a writer who knows exactly whats going to happen and how to plot convinance you out. but that would be ridiculous(; anyhow. 2 more after this. and then it will all make sense. now, go." i turned and stared at a portal, swirling red. i walked thru, no hesitation. i stared about, seeing a skin at the far and of a room. between the ground i stood on and the ground it stood on was a blanket of red. lava.

it wouldn't be there if i couldn't beat it. i looked around and stared down at the lava. there was nothing.

"I'm yours for the taking... if, of course... are you brave enough?" the skin spoke, laughing at me. i examined it. pale, freckled, with a plain dress(unfortunately, blue was the only color that worked, and technically white people are significantly more likely to have blue eyes. brown really wouldn't have worked...).

brave enough... brave enough... did that mean i had to walk thru? no way. i felt around with my muscles, but without skin i couldn't properly feel. i decided to walk... across. without giving myself time to turn back i ran onto the lava, wincing. i looked down. where my feet were was smooth stone, obsidian, in the shape of my foot. oh!

i stepped forward again, and again, and again, until i was past. i stopped and stared at the skin, head cocked, then reached out and gently touched it. i felt it cleave to and envelope me. i had skin!when the odd sensation ended and all the bubbles between skin and flesh smoothed out, i appeared again in a room. it was different, tho.

there was no portal, and no body part. just grey, and across from me a mirror, but off center. i had to choose to see myself. i was afraid. what would i see? i hardly had a choice. i stepped toward it, staring in. i had blue eyes, not solid blue, but with pupils and whites. they didn't glow, literally or figuritvly. my hair was red and frizzy. i was tall, with freckles. i was a girl. i leaned forward and touched the mirror, watching it ripple from my fingertip, as the finger disappeared thru. it was the next door.

i stepped thru, and found myself in a black space, but with a floor. they eyes on one end, a door on the other, and beside me, an orb with images swirling within, blurred and distorted.

"the end of your games."

"but- what? i thought this was yours?"

"those are your memories. that door is freedom. you can choose to take any of them, if you like. or you can return, to the daisy field, or anything else." of course i wanted my memorys and freedom! i reached towards it.

"memorys can hurt. freedom can be hard. why not turn back, relax, forget?"

"because... because i know its not right?"

"based on what? a random, untrustworthy feeling?"

"how do you know its right?"

"i tried to help you go to the place that would make you happiest."

"this isn't just about being happy!"

"isn't that what you want? happiness? safety?"

"you don't even know... trust me, i know. ill take care of you. let me make the choices, and you don't have to worry about it."

"oh... ok... yes." as soon as the tiny word passed my lips, i heard a mighty whoosh and appeared in the field of daisys, blind. i didn't feel anything either. and suddenly, all my new memorys were torn from me. i cried out in pain, but didn't make a sound. where was i?

my sight returned, and i saw blackness all around. except two, blue eyes.

"hello, and welcome to my game." 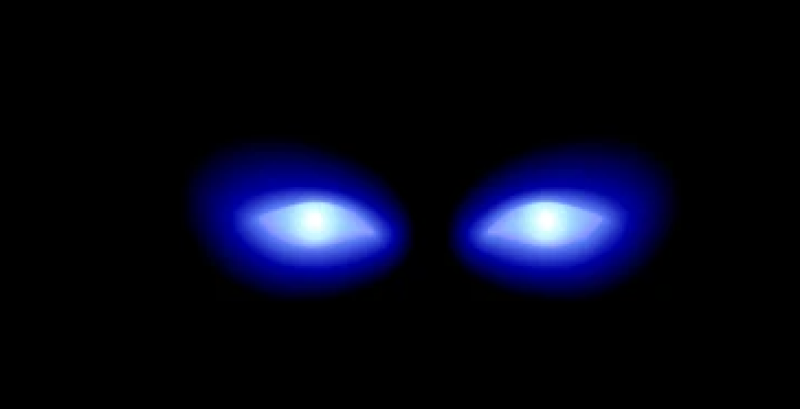 (she started off with her ears)

i guess you could call the entity self doubt? there really isn't a super deep meaning tho.

I'm super proud of this!(for once)

Favorite Quote:
Nobody will ever win the Battle of the Sexes. There's just too much fraternizing with the enemy. ~Henry Kissinger

Life it too short to let you matter.