Once again, I was alone. I poured out my wounds to the porcelain basin. Nobody was here, and nobody would judge me. I was alone, and I could make things right. I stared into the watery face of the bowl, a liquid grave for my sins staring back at me. I pushed my hair back, a weak attempt at control. I closed my eyes and pushed my finger farther and farther down my throat, until the feeling came. The weightless, floaty feeling. It was coming. I would regurgitate all of my hurt, the hopes for the boy who never loved me, the repulsive feeling of wrenching more and more food down my throat. The toilet was a silent friend, my special safe haven. It was a way to make amends.

I heard girls come into the bathroom, their voices overpowering my self-repulsion. I listened to them and watched them through the slight crack in the door. Would they notice that my shoes were facing towards the stalls, not towards them? Would they find out and tell someone? Fear rose into my throat like bile, and I pushed it down. Their very walk was like a goddess: elegant and commanding. Their appearances were flawless, tidy hair that never had split ends and makeup that made natural beauty all the more enhanced. They smelled of cheap perfume, although it was probably more expensive than all of my clothes put together. I watched them in awe, as they slouched against the sinks like hooligans, gossiping. Their bright eyes leant well to the rumors that they spread with ease.

They took drags on several cigarettes filched from the nurse’s office. The smoke wafted towards the ceiling, bearing secrets that would stay contained within these sterile, unseen walls. Of course, this was a no-man’s-land, so who would tell? Cigarettes were some of the better things that happened to the third-floor girl’s restroom. They chattered, impervious to the fact that I was within the stalls. Why would they know, after all? I was a no one, a nobody, a Dalit of the highest kind. They seemed to glow, even though the fluorescent lights were far from flattering. Their voices conveyed mystery in hushed tones that invoked drama. I listened, silently pleading for them to leave. The smoke curled around the doorframes, lingering like a stray dog. They dumped the smoldering butts into trash cans heaping with brown crumpled paper towels. The coast was clear. I listened for a moment, and then continued.

It was easier this time. I’d gotten used to it by now. Now I could remember to not be ashamed of the food I crammed down my throat, of the binge of candy bars I’d eaten to ensure my mother I wasn’t counting calories, to forget that I came from a house ravaged by fighting. The food once again escaped my throat in a torrent, as I felt clean again. Hollow, but clean. My penance? To do this again after dinner, and the next day, and the day after that. It was a limitless pattern, one that allowed me to develop a solid routine. For once, I was perfect at something, and it was entirely my secret. The bell rang and I escaped quickly into the crowd, gliding into the throngs of students penetrating the hallways once again. Empty never felt better. 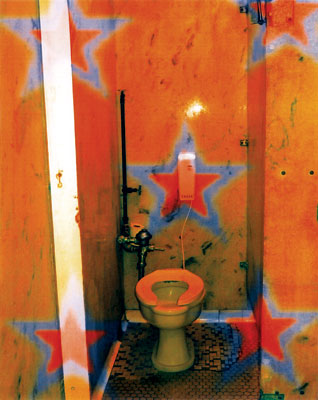