No one really believed in Townsend Highs basketball team. They were a completely inexperienced team, since their whole starting lineup graduated last year, and the only sophomores and juniors that could really play basketball had given up on the team, and went to join the better private schools. Last year, the Townsend High Trojans had won the states, but got to nationals and lost horribly in the first round to a team called the Hades Hornets. They played basketball like someone would play rugby…

Only one player actually had talent on the team: Hayden Everett. She scored most of the teams points. There was Leslie Hofmann, who was 6’1” but had the toughness of a bunny rabbit, but even so, she was good. The other five starters for the season, according to the paper pinned outside the coach’s office, were Aubrey Pastol, Genevieve Costa, and Annalee George.

The first practice started on November 30th. It started with a small lecture from the coach, Coach Neeve, about working hard. It was a pretty rough practice, with so many mistakes the team thought that Coach Neeve would be in tears by the end of it. In the locker room at the end of practice, though, Coach Neeve walked in after everybody had finished getting changed.

“Today,” he said, pausing to look at every single one of the players, “is a stepping stone. I wasn’t sure if any of you noticed, but today’s paper released its “Top 25 Teams of Akton County”. We weren’t on there.”

Silence filled the room. No one dared to speak. You could hear a pin drop.

“Take that, and just let it marinate in your mind. How does that make you feel?”

And with that being said, Coach Neeve walked out of the room.

The team took that into consideration over the next few weeks and worked so hard, people had to start bringing sweat towels to practice so they wouldn’t get the floor too slippery. The Townsend High Trojans Girls Basketball team won their opening game. And the one after that. And the one after that. In fact, they won so many games that the people who lived in Townsend started questioning what methods the coach was using in order to win.

Finally, the league results were in: the Townsend Trojans were in second place, with a record of 9-2. The team in first place, the Jackson Jaguars, was 10-1. They had to lose to this other team in third place in order for the Trojans to win.

Then, on one Thursday night, the team got a text from Coach Neeve, saying to be at school by 7:30 for an important meeting. The whole team gathered in room 114 for the meeting, and Coach Neeve told them what had happened: the Jackson Jaguars had lost in an amazing overtime, the score being 32-31. The whole team roared with cheers, but just before they departed, the coach told them the news that wasn’t as great: they had to beat that same team in order to win the league title on Tuesday.

Tuesday came too quick. The team had spent the whole weekend, hours on end, practicing really hard, preparing for this momentous game. Everyone had those pre-game jitters. Finally, after a long day of school, the final bell rang out through the halls, and the team proceeded to the team room to get dressed for the game.

The locker room was silent. No one spoke, and not even the team chatterbox, Patricia, dared to say a word. After everyone was finished getting ready, Coach Neeve walked into the room. He reminded them of what they needed to do, what players on the other team did what, and the fatal flaws they had to avoid. He didn’t mention how important of a game it was, nor did anybody else. When he was finished, he said, “Bring it in.”

The team stood up and got into a huddle. Coach Neeve looked around at everyone one of the players.

The team brought their hands in and shouted, “Hustle!”

The game started slow. The first quarter seemed the quickest, and ended with a score of just 3-0, Trojans. Hayden had hit a huge three at around two minutes, the only basket of the first quarter.
The second quarter seemed longer. The other team went on a spurt of 10 points to none, leaving the score 10-3. Coach Neeve didn’t take a time out or say anything all quarter.
The buzzer rang, followed by a last-minute shot attempt from Aubrey, but it just bounced off the backboard. The team hustled into the locker room, where silence gripped the team once more. Coach Neeve told them what they were doing wrong, but said something that shocked the whole team.
“I guess they just want it more than us.”
Silence.
“Let’s go.” He walked out, leaving the team at its lowest point in the whole season, pondering on what they would do to come back from a 21-9 deficit.
Halftime ended and the third quarter began with another three from Hayden. The three picked up the momentum and spirit of the team, and soon it was being followed by a made basket and free throw from Genevieve, and two more baskets from Annalee. Soon, the whole team was on a roll. The third quarter ended, and the score was now 25-24, with the Trojans down by 1.
Coach Neeve told them to keep up the good work, and that they wanted it more than them. He said that he would have to start telling them that other people wanted it more than they did, in order for them to perform up to their standards and beyond.
The fourth quarter started once again with a three, but a girl off the bench, Alex, made this one. The Trojans were up 27-25, and the baskets just kept coming. But the other team started going into a stall around 4 minutes, tearing precious time off the clock. Finally, a big girl went to the basket and charged into Hayden. The refs called a player control foul against the girl, but Hayden didn’t get up. She was in the fetal position, grabbing her head. The trainer went over and carried her off the court, but said she could not return to the game, due to the fact that she had signs of a concussion. Coach Neeve picked a girl off the bench, Kelly, who hadn’t seen playing time all year.
That injury was followed by two more, putting Genevieve out with an ankle issue and Leslie out with her knee. Two more girls, Kelci and Jamie, got off the bench and into the game for Genevieve and Leslie.
The score was now 29-27, after a three made by the same girl who ran Hayden over and a free throw. The Trojans were trailing by 2 with 10 seconds left.
“Time out!” Coach Neeve called when they got the ball back with 9.7 seconds left.
The refs gave it to him and the girls walked off the court. He said only two words to them “Get fouled.”
The girls got the ball, and Aubrey drove to the basket, getting fouled with 1.3 seconds left.
Girls on the other bench were already standing up and cheering for their team, as if they had already won the game.
Aubrey stood at the foul line, shaking like crazy. She made the first one no problem, and the whole bench erupted. The referee got the rebound and gave her the ball again. Aubrey dribbled the ball a few times, spun it, and shot. It missed. But before any time could run off the clock, the referee blew his whistle, and went over to the table to deliver the reasoning behind his whistle.
“Violation!” He yelled. “On number 23, black, for leaving too early for the rebound! One more shot!”
The bench and the stands erupted in cheers, as the girls lined back up again and Aubrey got the ball back for another foul shot. She got the ball and shot it. It went in. The score clock now read 29-29, still with 1.3 seconds left. Neither coach called a time out, for they didn’t have any left.
The other team simply threw the ball all the way down the court to this really tall girl, number 23, who was the same girl that made the violation on the foul shot. It soared high over her head and bounced off the wall. They turned the ball over, still with 1.3 seconds left.
The Trojans got the ball at the half court line. They lined up on it, and broke into different directions. Kelly went in the spot that Hayden normally went in, where she broke to the basket, but the made a spin move and ended up near the 3-point line. The other team was paying too much attention to everybody else to notice her, so Alex, who was inbounding it, passed it right to her, and Kelly took a shot, and the buzzer went off.
Time seemed to slow down. The ball hovered in the air, arcing over the players in the paint, just watching the ball, some praying it goes in, and others praying it won’t.
The ball bounced on the rim a few times before spinning…into the rim.
Time sped up and the crowd jumped up and down, along with the team members who could still do so.
Coach Neeve and the rest of the team, some of them being carried by others, gathered in the center of the court, screaming and cheering, as a reporter for the local newspaper snapped a photo of them. This would be the cover picture tomorrow, and the title would read “Miracle Team”
And a miracle team it truly was. 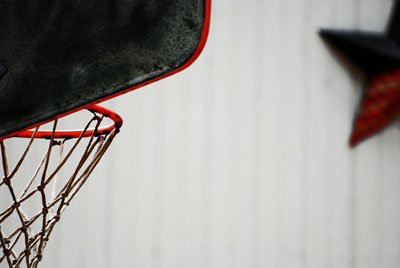 The author's comments:
This piece was inspired by my high school basketball team. At the beginning of the season, we were labeled an insufficient team that would not make it very far, but we did. I hope people read this piece and realize that everything and anything is possible if you work for it.
Post a comment
Submit your own