Favorite Quote:
"I reject your reality and substitute me own!"

Welcome to the Opera Populaire. It was built hundreds of years ago in the mid 1700s. Many people- men, women, and children- came here to live and train here for the ballets and operas. Some of the ones that were performed here were Il Muto and Hannibal.

But, sadly, all performances here stopped after the great disaster- after the famous Phantom of the Opera performed his last, in an opera he himself wrote, called Don Juan Triumphant, which, as many of you know, this is where Christine, the beautiful soprano that the Phantom loved, took off his mask, exposing his face. He then made the beautiful chandelier that was once hanging here fall.

Many of you know the story. But no one knows what happened after Erik let Christine go. Until today.

Today, July 25th, 2222, you are going to listen to the story of Erik, and what happened to him after he let Christine go and marry the Vicomnte de Chagny, better known as Raoul.

We have found a diary that belonged to Erik, and you are going to see what went on inside of his head- Erik, the Phantom of the Opera!

It has been a month since I lost Christine, my beloved Christine, to the Vicomnte, or Raoul, as she calls him. My heart aches more than ever, and it’s hard to bear.

But since I destroyed the place that I once called home, and I left my mask there, I can neither go in public nor return to the place of my solitude. I can never go back in public again, lest I want to be ridiculed mercilessly as I was as a child.
I am more of an outcast than ever before.
MY GOD, MY GOD! WHY HAVE YOU ABANDONED ME?!
My abhorrent face gets me no compassion!
Those who have seen my face,
Draw back in fear.
She was the mask I wore.
It’s me they hear.
Will this trial of pain and misery never end?

June 21
I have resorted to the same mask I wore as a child- a potato sack. Now I can buy food, paper, and ink so that I may be able to write my music. And I can buy these things without getting much ridicule.
I have feelings of great remorse of what I did to my home, and how many men I have killed trying to get to Christine.
Oh, the beautiful Christine.
Back then I had a purpose to write my music.
But now, my world is shattered, leaving me with nothing but a world of blackness, and a broken heart.
But I have come to wonder if my heart was ever healed.
Can an already broken heart break again?

July 1
Sometimes I wonder if I can go to Heaven. I have killed many men, hurt many people, done many sins.
No.
I must be destined for the fiery depths of hell.
I suppose I deserve it. No, I don’t suppose. I know I deserve it.
I’ve never put any faith in God. I never had a reason to. After all, it was God who gave me this horrible, twisted, disgusting face.
Not even my own mother wanted me.
I am the vilest creature alive.
And God made me this way. Why should I love God?

July 13
Today, I think my dark insanity has reached its peak.
I could’ve sworn I saw a man that looked like Jesus. He had hands and feet that had holes in them.
But no one else saw him.
Oh, Christine and Raoul were right.
My brilliance has turned to madness.

August 14
My new life begins today.
I was sitting alone, as always, trying to write music. But my heart was empty, and music hasn’t given me the same joy as it used to.
So I started fiddling with the ring I had given to Christine when I was trying to force her to choose me over her insolent lover.
Instantly, I was over come with memories of Christine. The depths of her eyes, the sound of her beautiful voice.
But that is where she shall stay, in my memories.
Her beautiful voice filled my mind, and I remembered the song she sang with me in the cemetery.
Angel of Music,
I denied you.
Turning from true beauty.
Angel of Music,
My protector,
Come to me, strange angel.
My eyes welled with tears, and I began to weep bitterly.
And He appeared again.
“Erik, why do you weep?”
“Your Father has made my life hell. What did I do to deserve this face?” I roared.
“Why do you think my Father gave you your face?” His voice was quiet and patient, and I was instantly filled with an unbearable guilt for yelling at Him.
“I am a Devil’s Child,” I whispered miserably through my tears.
“Erik,” He said, pulling off the sack that covered my face, “the Father loves you, just as I love you. You let the face control your life. You let yourself believe that you are unlovable.”
Looking back, I saw that He was right.
“But, why? Why me?”
A look of pity washed over His face.
“Because you have gifts that everyone loves. If they can look past your face and love you for whom you are, then they have learned since I have been here. But do not fret, Erik. Someday, you will come home to the Father’s home. You just need to turn your life back towards the light.”
Then he kissed the distorted side of my face, got up, and disappeared into the morning fog.
I watched him disappear.
And then I did something I haven’t done in a long time.
I knelt down and prayed for forgiveness. 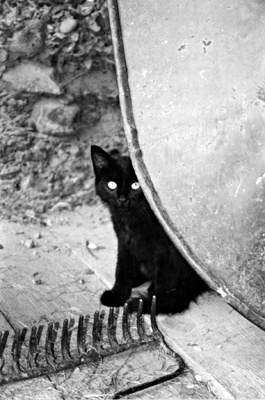 The author's comments:
This was an assignment I had to do. The topic was an outsider that was introduced to the light through Christ. Since I love the Phantom of the Opera, I figured that I could right about what happened after Christine left Erik to be with Raul. Hope you lie it!
Post a comment
Submit your own

Favorite Quote:
You are enough!
You are so enough!!
It is unbelievable how enough you are!!!
-Sierra Bogess

Favorite Quote:
Hello. My name is Inigo Montoya. You killed my father. Prepare to die.

Favorite Quote:
Nothing is stronger than gentleness, and nothing is so gentle as real strength.

View profile
This was really good! Even though Erik did die in the book, it's a good  extension of the movie. I just have two things. The play he wrote was only called Don Juan, not Don Juan Triumphant, and you spelled VICOMTE wrong. It was still really good!
Janedoe12345 said...
on Sep. 14 2010 at 2:43 pm
Janedoe12345, Cooper, Arkansas
0 articles 0 photos 7 comments
View profile
I loved this. Well done combineing the book and the movie.
Raven_Lilith_Jace GOLD said...
on Jan. 15 2010 at 3:26 pm
Raven_Lilith_Jace GOLD, Boonville, Missouri
12 articles 0 photos 12 comments

Favorite Quote:
"I reject your reality and substitute me own!"

View profile
erm well i never read the book. I just saw the movie, and i never realized that the phantom dies...my bad.
vmfms said...
on Jan. 11 2010 at 7:57 pm
in this you combined the movie and the book but that wouldent work because in the end of the book the phantom dies and the play is never found