I can still picture his hands shaping themselves into a butterfly for me, the way his fingers adroitly formed the alphabet, one letter right after another. Those fluent hands, smooth like a surf-polished stone, worn from talking. Those hard-worked hands, calloused from carpentry, steady with precise recipe measurements. Those beautiful hands that so patiently taught me how to speak.

His hands crafted so much. Bookshelves, tables, cakes, magic tricks. I imagine at one point they were strong, printed with ridges and curves. By the time I came to know them, the fingerprints had long since worn down to leave only smooth, papery skin. His hands were his mouth, his pen and paper, his story. His signs were so effortless and elegant I felt jealous. I could hardly spell my own name then.

His hands spoke American Sign Language. My hands copied his, hoping to say something as his did. Carefully, exactly, his hands would shape mine into the letters K, A, T, I, E. Then, when I was good enough, I would surprise him with more signs: my name, my age, my favorite animals. I could keep score in the card games we played, and tell him that I was winning. “Hey, I'm ahead of you!” “Yes,” he would sign, “you're winning.” I bet he let me.

Each summer I came back with more sign language under my belt. I hoped to impress him. I learned to talk to him. I learned from him. He taught me that deafness came with its own culture, its own world. I wanted in.

And then he left, just like that. No final board game, no last magic trick. No more spelling my name for him or telling him how old I was. Just a funeral service with a bad interpreter. I was angry. We weren't done yet. I was still learning. I am still learning.

My grandpa taught me that. 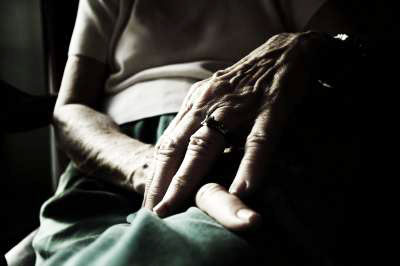 This article has 11 comments.

Favorite Quote:
"Hopes are like hair ornaments. Girls want to wear too many of them. When they become old women they look foolish wearing even one." -Mameha-san

View profile
This is beautiful. Very nice. ^_^
kmunsell BRONZE said...
on Oct. 14 2009 at 2:42 pm
kmunsell BRONZE, Deep River, Connecticut
1 article 0 photos 6 comments
View profile
Thank you so much!
alexataylor234 said...
on Oct. 7 2009 at 3:16 pm
I think this is a beautifully written essay. You write very well. I especially love how you didn't reveal who it was until the end. Good job and good luck getting into your college of choice!