Lost Valley, Auburn Maine, is a great place to ski, snowboard, or just to get away from home and do daily business or schoolwork in the cozy lodge on one of the fifty plus tables they have there. You may also be interested in the food they offer there. Also, the skiing is great. About 22 trails ranged from beginner to expert. They make fake snow when needed, with the 10 snowmakers they have there, and keep the trails well groomed. Some wood trails scatter between the more used trails, opening more trails for the advanced skiers. The terrain park is well kept and more jumps could be added if more snow came. The rails they have there are either pipes or flat, and they also have a few boxes.
The Lodge is a great place to come into after Hours of skiing. They have cushioned chairs to sit in, lots of tables, and some good food to get. You can choose from just fries, all the way to a two hot dog and fries meal. The pricing is a little much, but it’s definitely worth it. You order at one window then go into an open area where they bring it onto a counter and you pay for it there. It’s kind of like a drive through without the driving.
The skiing is what most people go for. Twenty-two trails all named after animals or trees, and all of them are more fun every time you go down them. The expert trails range from tight wooded areas that make you have split-second decisions or wide areas that are extremely steep. About half the trails are actually groomed, but if you are advanced, then you shouldn’t have to worry about it. There is one trail named coyote, that every time you carve or skid stop on your way down, it creates a barrage of snow that piles up at the bottom. The pile at one point was so big that the ski patrol had to get the groomers out to cut down the pile. The beginner trails are anywhere from long and gradual, to short and quick. Some trails weave between other trails, mostly not letting you go faster than 15 miles per hour. Every beginner trail is groomed perfectly, but sometimes a bump or hole will appear in the snow. The terrain park is my favorite place there. It has two sets of two jumps for the first half, then ramps with rails at the end. You can also shortcut through one wood place to get to another jump. Also, there is a hidden place with a beginner rail and two other rails on the other side of the mountain that not many people know about.
The two chairlifts could be better. The gray chairlift, with Roughly seventy chairs, is about a two and a half minute ride, and the chairs don't go more than 40 feet above the ground, whereas the blue chairlift exceeds 80 feet. Also, the chairs are uncomfortable.  The black plastic “seats” are designed to fit anyone, but they have cracks all over and have bent so much over time. The blue chair, on the other hand, is more comfortable, and a shorter ride, but doesn’t lead to any good trails. The gray chairlift goes to the terrain park and a few other trails, while the blue one leads to bull moose, coyote, alpine, logging trail, big buck, (All expert trails) and a few beginner trails, such as pine grove, possum park, rabbit run, and bobcat.
All in all lost valley is a great place to kick back and relax, go skiing, snowboarding, tubing, or even snowshoeing. Tickets are pretty expensive, but it is well worth it for the fun experience that lays outside those doors. Compared to other mountains and peaks it falls short, but for a small town ski resort, it’s a ten out of ten. 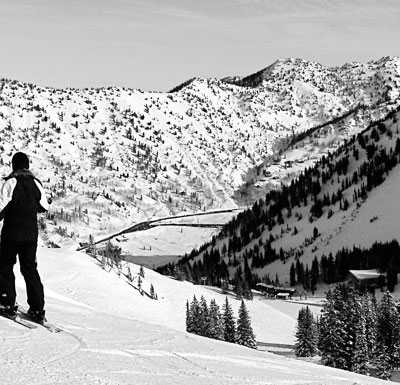 What inspired me was because i love skiing