“The Italian Job” is perfectly clichéd. First the heroes commit the ultimate heist of $30 million in Spanish gold, then one of their own betrays them, and then the heroes try to recommit the heist – this time stealing it back from the traitor. Of course, the heroes don't care about the $30 million. No, the motive is more noble: revenge. This movie plays like “Mission Impossible” and a James Bond car chase combined.
“The Italian Job” poses a problem. When every character is a thief, how does a director distinguish the good guys from the bad guys? In movie making, playing shirts and skins will not solve this issue of ambiguous teams. So the movie opts for the next easiest identifier: Classic good and evil clichés.
Let's look at Team Good. The expert thief (Donald Sutherland) regrets that he ­didn't spend more time with his daughter. Everyone can relate to this. Since the audience sees him as a sincere father figure, they agree with his pursuit of revenge. Another “good” thief (actor Mos Def) started as an innocent 12-year-old pyromaniac with an afro, and goes by the name “Left Ear.” I laugh with the audience, and conceded that he must be harmless. The female lead (Charlize Theron) boasts a voluptuous body, consistently flaunts tight clothes, drives fast cars, and begrudgingly admits she needs a man to help her through her struggles. Enough said.
Now let's look at Team Bad Guy (Edward Norton). He commits two cold-blooded murders. Done. We hate him. And to put the cherry on top, he's rich. Everybody hates a rich killer.
The movie-makers filmed every heist (the movie treats us to three) like a collage of Home Depot commercials. Each character is assigned a job. One paints over a thousand-year-old mural as if showing off BEHR's new primer. Another demonstrates the usefulness of a laser measuring tape as he installs explosives. And another boasts the torque of Rigid's new wireless drill as she breaks into a safe. The audience muses over how the henchmen plan to use home improvement skills to steal Spanish gold.
Since the camera switches rapidly from henchmen to henchmen, the audience is fooled into believing everything is happening quickly. Even the music taunts us by building up, then dissipating into nerve-racking staccato. Then the tension explodes in the high-speed chase.
This film suffers from mild schizophrenia. Theft and revenge are rewarded and condoned. Boats fly through the canals of Venice. Motorcycles chase custom cars through Los Angeles. The guy gets the girl in the end. As I said, perfectly clichéd. 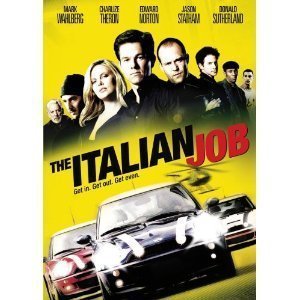