In “WWZ,” the zombie design is seriously flawed; the undead don't mill about aimlessly like most zombies do. They run like they're going for the gold medal in the 200-meter sprint. Now, in any ­zombie movie, the zombies are not allowed to win to easily. Usually they're so slow that the heroes can outrun them, frantically darting from useless hiding space to useless hiding space while the audience holds their breath and hopes the monsters won't notice the blonde heroine hiding behind the stop sign. With “WWZ,” not even Brad Pitt can outrun the ravenous revenants.

This poses a problem. If the zombies chug several Monster Energies before deciding to overthrow the world, all the desperate and futile attempts to stop them and all the grotesque brain eating will be over in fifteen minutes, and there won't be a movie. So how do you stall the zombies long enough for the heroes to have a chance?

Easy. These zombies only run if they're stimulated. Breaking glass, grenades, rolling soda cans, and high-pitched female vocalists (all these are in the movie) will stimulate them, leading to a intense fifteen-minute fight for survival. After that, those zombies not impaled or rendered asunder by a grenade or sucked out of an airplane will return to roaming about aimlessly or banging their heads against the wall waiting for more stimuli.

The movie climaxes in a medical facility overrun with dormant zombies. As the heroes sneak through the corridors, the zombies yawn loudly, wheeze like asthmatics without inhalers, and make clicking sounds with their teeth. That's right, the dormant zombie's primary entertainment is briskly rapping its teeth ­together like an exuberant bunny who hasn't realized his carrot has been taken away. The zombies jerked so awkwardly I felt I was riding “Pirates of the Caribbean” at Disneyland with Brad Pitt valiantly dueling the anamatrons.

To be fair, in the first half of the movie, the camera shakes like Pompeii every time the zombies show up, and therefore you're fooled into believing the undead are fairly terrifying and maybe even lethal. However by the end, these zombies provoke more chuckles than screams.

Other than the flawed monsters, “WWZ” has a second, but forgivable flaw: its conclusion. How do they cure the zombies? Ask H.G Wells; he used the idea against the aliens almost a hundred years ago. Basically it's a total rip off of “The War of the Worlds,” but only sci-fi fans will care.

“WWZ” offers a thrill ride, but a tame and relatively bloodless one. The themes are as positive and inspiring as a zombie movie can be – a man fighting for his family and the ingenuity of man triumphing over obstacles – so I left the theater content. This is not a work of cinematic art or a soulful character study – or even logical – but if your friends invite you to see it, go. 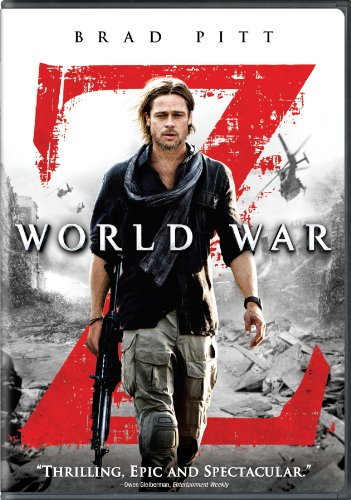