Uttering that simple, even generic, four-syllable name has an astounding affect on people, specifically the demographics of older children to young adults. It’s a name any normal person could have, and yet it is the title of a fictional character, a sensational book series, and cinema gold.

Moviegoers all over the world crammed into theaters at midnight to watch the final movie, Harry Potter and the Deathly Hallows: Part 2. I did not attend the midnight screening, but instead found myself floundering for a seat during the matinee of July 15th, 2011.

Enthusiasm and passion for the film radiated across the audience.
You would think, for a so-called children’s series, that there’d be a lot of ten-year-olds bouncing up and down in their seats and disgruntled parents checking their watches, waiting for the movie to just end. I endued up sitting next to a grown woman who was with a couple of her friends; and while surveying the audience during previews, noticed a lack of children. But perhaps the adults grinning at the screen were once those ten-year-olds so long ago, now watching their childhood end for good.

Perhaps it was the mind-boggling IMAX 3-D and the familiar soundtrack music played at just the right moments (or because I’d mulled for the past week over the fact that this would be the last ever Harry Potter to grace the big-screen), but I found myself tearing up during some particular scenes. I wasn’t the only one though, the sniffling was ubiquitous. Either way, I was glad the theater was dark and I was wearing the glasses.
When Nagini lunged at the screen, I involuntarily snapped back. When Neville killed the monstrous snake, the entire audience erupted into proud cheering and raucous applause. When the movie finally ended, I clapped and hooted with everyone else. Leaving the darkened room and disposing of the IMAX 3-D glasses via employee-holding-out-garbage-can-and-ordering-to-do-so-in-a-monotone, the oddest sensation washed over me. I felt slightly empty. And yet, strangely satisfied. All good things come to an end, I told myself, as I departed the movie theater.
It’s true. We all knew Harry Potter would end one day. He couldn’t forever be fighting Voldemort and the villain’s legion of Death Eaters, he couldn’t forever remain a teenager, he couldn’t forever stay at Hogwarts, and he couldn’t forever continue.
A bit like how we all will die, one day. We aren’t immortal so it’s inevitable, but we still can be remembered after we’re gone. Ended, so to speak. The series taught me that.
Was Harry Potter and the Deathly Hallows: Part 2 the best of the Harry Potter movies? I think it’s pretty close to being so.
Is my childhood over? A part of it is. But that’s just the way how life works, so I don’t grieve. There’ll always be the books to return to, movies to re-watch. J.K. Rowling, the mastermind behind the story, is opening up a website, Pottermore, dedicated to Harry Potter. The Boy Who Lived still lives. If I ever have children, I plan on reading them Harry Potter over traditional fairytales. Perhaps they will connect with the young wizard and the magical world lurking in between the pages. Perhaps they’ll fall asleep wishing for a dream to whisk them away to that world, where they can wield a wand, ride in flying cars, and explore the mysteries of Hogwarts. Perhaps they’ll wake up reaching for the next installment, until they too reach the end.
All is well, Harry Potter. All is well. 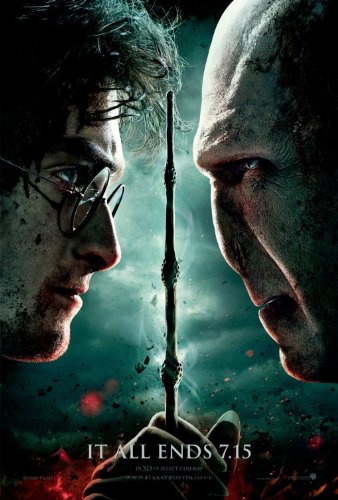 
Buy from Amazon Available on iTunes
The author's comments:
Harry Potter has been such a big thing all my life. Now it's over. But we shouldn't be sad about that. It was a fantastic journey, all those years, something we can look back on and do again because we still have the books and movies.
Post a comment
Submit your own

Favorite Quote:
The person, be it gentleman or lady, whom does not take pleasure in a good book must be incredibly stupid. --- Jane Austen

Favorite Quote:
"I love deadlines. I like the whooshing sound they make as they fly by." --Douglas Adams

"The object of life is not to be on the side of the majority, but to escape finding oneself in the ranks of the insane." --Marcus Aurelius

Nice review!  For people who haven't read the books, you probably gave a bit too much away, though.  But whatever.

Your review was a bit long.  I think you had way too much opinion and not enough summary of some of the main events in the movie.  While a bit of opinion is nice, too much is really boring.

Anyway, good job! :)  I can't wait until the movie comes out on DVD.

Jacob44 said...
on Aug. 3 2011 at 10:22 am
Great review, I loved the humor displayed recently in the latest HP movies! (though I must admit, though I'm a huge fan, I'm a huge fan of the books only) I saw it at Midnight and coincidentally ended up sitting next to my second cousins whom hadn't seen in years :) I was in costume (which constituded of the wand I got in sixth grade) Though there was one scene that I knew would come but it still was even more sad on the big screen, the scene when Nagini kills Severus. He was my favorite character... oh well
forgottenpenname GOLD said...
on Jul. 27 2011 at 5:47 pm
forgottenpenname GOLD, Troy, Michigan
12 articles 0 photos 147 comments

View profile
This is beautiful, Twinks, and really describes how the movie series's end has felt for all of us. I was bawling when the movie ended, but at the same time smiling through my tears because, as you put it, it left me oddly satisfied. Awesome piece. :)