Fallen is one of those books with an enticingly rich, dark cover that beckons you to buy your own copy. You try looking towards the other books, other genres even, but your eyes just can't leave the distressed, gothic damsel on the cover, with her face covered by her hands in fear. You finally decide to give in and take the book home.

Many internet book junkies have condemned this book to be a rough, rip-off of Twilight by Stephenie Meyer. It does seem so at the starting of the book. Lucinda Price is as much of an outcast in a new place, as Bella Swan. The most handsome guy on campus falls for her, which is same in the cases of Edward Cullen and Daniel here. But in this book, Luce actually makes good friends who stick with her whereas in Twilight, Bella's high-school friends don't really have a significant role.

Okay moving off this unnecessary comparison, I have some serious issues with the way the book actually starts. A little spoiler her.

Luce is sent to a reform school, Sword and Cross, and that's where she meets Daniel Grigori.

But when Daniel Grigori first sees Luce, he flips her off. Yes, dear reader, Daniel first smiles and then shows her the finger. The mascot of our generation. (and they thought Regina George was mean?)

But what annoyed me most was that even after that rude gesture, Luce is stupid enough to keep pining for him. So what's the message here?

I was reall pissed off by that.

The story does have some character development though. Luce begins to believe in the power of love and the strength that it gives.

There are many intense scenes and the plethora of characters is really rich and captivating. This book however, seems to set the foundation for the other books to build up on. Yes, that is true in the case of all series, but you just have the slightest hint of something supernatural in the story itself. It's the last three or four chapters that actually bring forth the maddening realm the characters are a part of. Fallen feels like a big bowl of ice-cream you whipped up at home, and you've finally put it in your freezer, waiting for it to set so you can dig in. In other books that we have read so far, the plot begins to unravel way sooner than that. You could look at the jacket of the book and begin to read. Halfway through the book and you might think that Daniel Grigori is a secret gangster with dangerous connections and he doesn't want Luce to get involved just so she doesn't get hurt. This book isn't for you if you like action and if you like fast paced reads. The next books might be better, but this one is just the foundation - that's all.

Don't get me wrong; there are some really good twists in the book and it is enjoyable if you read it with an open, critique-less mind.

Another thing that deeply perplexed me was that, Luce behaved very differently in two scenarios. When Daniel flips her off she actually starts thirsting more for him. But during this one scene, Lucinda Price suddenly becomes a pillar of female empowerment, stating that she found it stupid when girls acted dumb and unintellectual just for the sake of boys. Character development ..... ? I don't really know.

So go ahead and buy Fallen if you like dark, mysterious settings with messed up people. I do feel that the story is promising in itself, but in a fast-paced world of Tinder swipes and dating apps, the thought of an eternal love doesn't exactly appeal to a lot of readers. Especially when they haven't been expecting anything from the story and then BAM! at the end we have a fresh new, supernatural romantic ordeal.

That is my honest opinion and I'm really happy for all those who loved this book more than I did. 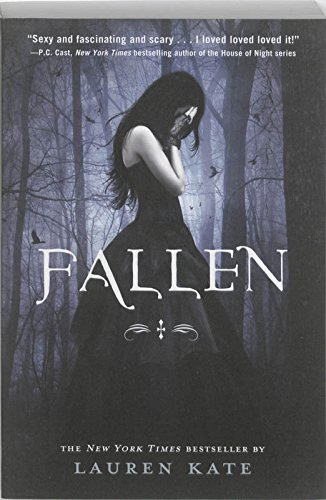