The Outcasts of 19 Schuyler Place by E. L. Konigsburg

Imagine three, daunting, obscure yet inventive towers standing next to a lone house in a newly restored neighborhood. Shards of blue glass, clock faces, orange paint, and metal bits cover much of the surface on the towers. Anyone walking by will stop and stare, wondering about the incongruity they radiate. These towers took more than forty-five years in the making, and are much more important than they seem to Margaret Rose Kane and her two Hungarian uncles, Alex and Morris, in The Outcasts of 19 Schuyler Place, by E.L. Konigsburg.

Margaret follows her two uncles, who are very old-fashioned. Margaret, twelve years old, is in the process of rebelling against the social arts. Uncle Morris is strict, but loves his niece. In contrast, Uncle Alex gives in to just about whatever Margaret wants. After Margaret find out a deadly secret that she wasn’t supposed to know, all hell breaks loose.

In this elaborate young adult book, E. L. Konigsburg strikes again, winning seven awards, including ALA Best Book for Young Adults and New York Public Library Books for the Teen Age. Konigsburg’s description is clear and visual. She writes inspirational characteristics of Margaret and her companions, as well as the stimulating and peculiar actions of characters throughout the book. “I wanted to throw my arm around him and kiss him, and I would have if I had not wanted to so badly,” says Margaret, after she meets a new character. Dialogue throughout the book is a combination of English and “Old World,” the language her uncles use. This book, however, has difficult vocabulary that could be a challenge to decipher for some readers. But the quick thinking helps readers build their own vocabulary, and improve reading skills.

When Margaret’s life takes a u-turn, Margaret fights to keep the engine running over devastating twists and horrid dead ends. The Outcasts of 19 Schuyler Place is about the complexly woven main character of a rarely noticeable girl, and how she fights till the end. Margaret wants to explore what lays within and around 19 Schuyler Place, and the reader can explore as well. 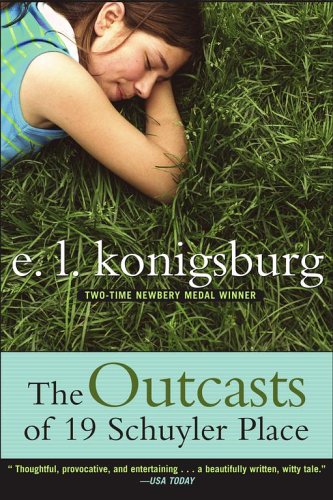 
Buy from Amazon
The author's comments:
I really enjoyed this book because of the unique experiences of Margaret, and I can relate to every situation.
Post a comment
Submit your own