The second book sucked. All there is to it. The first book was awesome, amazing, but the second almost destroyed my original opinion on the Hunger Games. But I’m not here to tell you about Catching Fire. I refuse to waste one more second of my time thinking about that book. I’m here to talk to you about Mockingjay.

The entire story idea for the Hunger Games trilogy is basically revolution. Overthrowing the tyrannical government that lives in luxury while the rest of the citizens struggle to stay alive. It’s set about a thousand years in the future, and a country called Panem stands in the place of the United States. Instead of states, there are Districts.


Oh, before I go any farther, I must emphasize that my review is going to be on the last book of the trilogy. If you haven’t read the first or second books, please don’t read on. It’s crucial that you read in chronological order, because they include vital details that will not be filled in in the third book. Yes, you will have to suffer through Catching Fire. But, I will tell you right now; it is most definitely worth it to read this series.

My point is, Suzanne Collins is an amazing author (who lacks a dash of humor in her works, which would really lighten up the mood, but still. She really makes you think, and the Hunger Games trilogy is a vast improvement over the Gregor and the Underworld series), and though this trilogy may not make my top ten list (maybe just barely), the Mockingjay is a wonderful addition to the series and I highly recommend you read it. 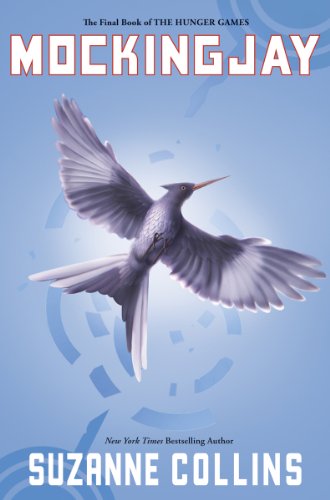 
Buy from Amazon
The author's comments:
Eurgh. Sorry about the length. I would love to hear what you thought about the book! Please comment!
Post a comment
Submit your own

View profile
I completely disagree about the second book - I like the WHOLE series. But yeah (talking about your comment below) I couldn't handle that much talk about war either. It gets boring and eventually, though it probably isn't, seems overlly dramatic. At the end of Mockingjay I just sat back and though, "That was the most depressing thing ever." It seriously made me feel sad!! Re-reading it, it's not as morose as it seemed originally, but still.
DiamondsIntheGrass GOLD said...
on Oct. 14 2010 at 7:34 pm
DiamondsIntheGrass GOLD, Martinsville, New Jersey
14 articles 1 photo 278 comments

I didn't read the whole review, as I've read the book and LOVED it.

I just want to point out that I believe the serious would not have been nearly as good if there was humor involved - The sort of life dealt with in the series just doesn't call for it.