Thirteen Reasons Why by Jay Asher

I was thirteen, the month was July, I was listening to Pretty. Odd. by Panic! At the Disco, and I was at the ice rink where I figure skate. But I actually began reading this exceptional novel in the bookstore, where I was so touched but the story that I begged my dad to advance my allowance to pay for it. I began to read it immediately.

The basic premise behind Thirteen Reasons Why by Jay Asher is this:


Hannah Baker killed herself by taking too many pills... on purpose. But before her death, she made tapes to tell people all the reasons why she killed herself, and Clay Jensen is one of the reasons. Clay and Hannah didn't even know each other very well. So a curious Clay listens to all thirteen stories that explain why she is dead, and all night Clay wanders his small town, and what he's told will change his whole perspective on life forever.


I was captivated by the plot, which was one that I'd never heard before, even though I've read so many books in my lifetime. I was once the one that felt neglected and, frankly, almost suicidal. This book made me feel like I wasn't alone, even though Hannah was fictional. Clay reminded me of a caring friend, and the story was a convoluted maze of problems and differences of opinions that led to the fateful end of a misunderstood character, and the changed life of another.

In truth, while this wasn't a challenging or overwhelmingly long book, but it hooked me emotionally from the first chapter, and the characters were so real that I could picture them in my head doing all these things. I could hear Hannah's voice on the tapes, with the static of a recorder in the background, and I could picture Clay sitting in at the diner drinking a milkshake while the tapes played.

My final recollection of this story will be an excerpt from the beginning of the book, and hopefully, I'll hook you in as much as it did me.

I rub my two fingers, hard, over my left eyebrow. The throbbing has become intense. “It doesn't matter,” I say.

The clerk takes the package. The same shoebox that sat on my porch less than twenty-four hours ago; rewrapped in a brown paper bag, sealed with clear packing tape, exactly as I had received it. But now addressed with a new name. The next name on Hannah Baker's list.

“Baker's dozen,” I mumble. Then I feel disgusted for even noticing. 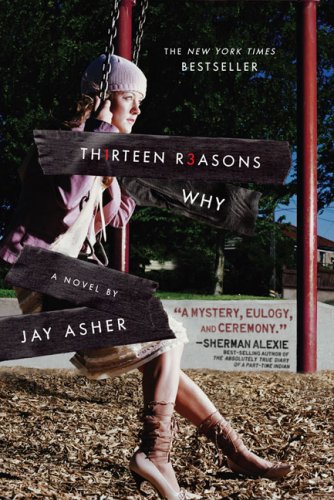 
Buy from Amazon
The author's comments:
This is my all time favorite book. I've read it six times.
Post a comment
Submit your own

I didn't really care for the book. Hannah's dialouge drove me crazy...

Great review! Maybe you can check out my review of Th1rteen R3asons Why?

Favorite Quote:
Be still, sad heart! and cease repining;
Behind the clouds is the sun still shining;
Thy fate is the common fate of all--
Into each life some rain must fall,
some days must be dark and dreary.
--Henry Wadsworth Longfellow (1807-1882)

Favorite Quote:
Anyone can hide. Facing up to things, working through them, that's what makes you different. -Sara Dessen.

View profile
Thank you so much!  Um, I haven't found any books from him (I often look at the bookstore), but I dearly hope he writes more because this story mesmerized me from the moment I opened it.
Hannahgee6 BRONZE said...
on Jul. 27 2010 at 10:54 am
Hannahgee6 BRONZE, Greensburg, Kentucky
1 article 0 photos 62 comments

Favorite Quote:
therefore do not worry about tomorrow. for tomorrow will worry about itself. each day has enough trouble of its own.
-jesus

View profile
i had picked up tis book a few times at the book store. but i wasnt sure if i would like it or not. but now i cant wait to get it. your review really hooked me. i was wondering if that author has anymore books? do you know?
-alice- PLATINUM said...
on Jul. 21 2010 at 5:15 pm
-alice- PLATINUM, Colorado Springs, Colorado
21 articles 0 photos 81 comments

View profile
Thanks!  Ya, this is my favortie book, but it doesn't appeal to a lot of my friends so I know where you're coming from.
Healing-Angel said...
on Jul. 21 2010 at 3:39 am
I've read this book and didn't like it much, but maybe I'll read it again. Great review. You captured my attention from the start.