I never expected a book to change my life – but this one did. The moment I picked up Exodus, I could not put it down.

Uris covers so much. He describes with meticulous detail many major events and developments spanning decades, and gives the life stories of dozens of characters: Israelis, Americans, and Europeans, all of whom become involved in the creation of the State of ­Israel.

The plot begins with a trick: the man we believe is a major character all but vanishes by the fiftieth page, and the woman we thought was a minor character is in fact the protagonist. Meanwhile, new characters from different times shuffle in and out, as the author manages to keep the plot organized and captivating.

What is so special about Eretz Yisrael, the Land of Israel? It's a question that has taken historians, writers, philosophers, rabbis, priests, and others years to answer. Personally, I do not think anyone can ever find a final answer, but Uris certainly comes close.

I would recommend this book to anyone interested in understanding more about their religious identity, learning the modern history of the most holy land on earth, or just being exposed to an extremely well-written historical novel. 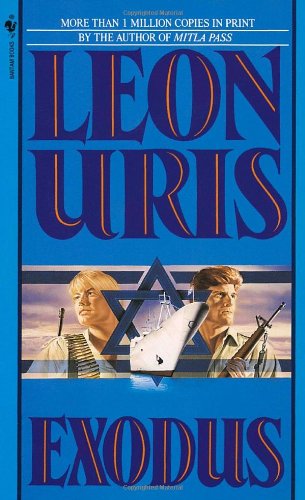 Favorite Quote:
'When the first baby laughed for the first time, that laugh broke into a thousand pieces and they all went skipping about, and that was the beginning of fairies.' - J.M.Barrie

View profile
Exodus is one of my favourite books! I loved your review and it is so nice to see someone enjoyed this book as much as me! :)
tuzik SILVER said...
on Jul. 25 2010 at 6:27 pm
tuzik SILVER, Martinsville, New Jersey
5 articles 0 photos 37 comments
View profile
thank you! i wouldn't have been able to write such a passionate review if it weren't for the powerful emotions in the book. hope you read it!
babigerl1194 PLATINUM said...
on Jul. 25 2010 at 10:32 am
babigerl1194 PLATINUM, Margaretville, New York
23 articles 10 photos 155 comments

Favorite Quote:
wat doesnt kill you only makes you stronger

View profile
whoa. i could feel your passion in this paragraph. whether i want to read the book or not it is still a very good piece. I loved the passion which is what its about and the way you put it together :))
tuzik SILVER said...
on Jul. 18 2010 at 5:54 pm
tuzik SILVER, Martinsville, New Jersey
5 articles 0 photos 37 comments
View profile
wow thank you so much!! it's such a good book, i hope you get to read it!
iDogrocker said...
on Jul. 17 2010 at 5:35 pm
iDogrocker, Lebanon, Oregon
0 articles 0 photos 78 comments
View profile
I love this review. It's interesting, to the point, and provides good information about the book. I was hooked from the very first sentence. You did a great job pulling the reader in. I might have to track this down!!