Is high school everything you wanted it to be? For Melinda high school is the discovery of herself. Laurie Halse Anderson catches you in Melinda's life and won't spit you out until the end of this realistic fiction book, Speak. Melinda is the “outcast” of the school. She seems shy and rarely talks. She doesn't seem to care much about school or anything for that matter.
At Melinda's high school every one hates her, even people she doesn't know. That is every teenager's worst fear, to be hated by everyone. Her old best friends don't even talk to her. Melinda wants to make things better, but she can't tell everybody why she called the cops at the summer party, no one will believe her. She has to keep her secret in. There is only one other person who knows her secret, IT.
Mr. Freeman is the crazy art teacher. He is also my favorite character in the book. He believes no one needs to learn anything but art, the other subjects are useless. This is Melinda's only “A” class. Melinda has been getting “C's” or lower in all her other classes. Mr. Freeman had everyone draw a piece of paper with an object on it out of a broken globe for their art project. The rest of the year they are going to try to turn the object into a piece of art. Easy right? Wrong. Melinda picked a tree. Melinda thinks this is going to be easy. She learned to draw a tree in second grade. Once she starts drawing she can't get the tree perfect. Does it need to be? She works with all different types of art. She makes trees out of junk objects she finds and linoleum boxes, but nothing seems to be working. Mr. Freeman says to put emotion into her trees. What emotion would she put into her tree, when she does not even know what emotion she is feeling?
Heather is the new kid in school. Melinda and Heather become friends because they are the outcasts at school, until Heather becomes a “Martha”. The “Martha's” are perfect, always matching, always helping type of girls. Melinda does not get along with them. Heather gets sick of the Martha's and how mean they are to her and goes back to Melinda. Melinda will not take her back as a friend. Who is Melinda going to be friends with now?
Ivy, one of Melinda's old friends is in her art class. I think Ivy is the nicest person to her at Melinda's school. Melinda finds out Ivy was never really mad at Melinda. Ivy and Melinda don't have much in common but one thing, they both hate IT aka Andy. Melinda wonders why Ivy also hates Andy. Is it the same reason she does? Ivy and Melinda are in the girls' room after school because Ivy accidentally spilled paint on Melinda. Just like any other high school, stalls are filled with writing, all the list people have made or stories people have told, it's like a journal for all the girls. Melinda decides to write something.
Rachel, Melinda's ex-best friend is a very popular girl in high school. Rachel is dating Andy. Ivy and Melinda can't believe it. Andy is a senior and Rachel is a freshman. Rachel and Melinda had been best friends for the longest time and they told everything to each other, until Melinda called the cops. Melinda wanted to tell someone her secret but now who could she trust? One day Melinda talks to Rachel. It turns out Rachel is over the whole calling the cops thing, so that's when Melinda decides to tell Rachel her secret. It didn't go the way Melinda hoped it would, Rachel was so mad and didn't want to believe her. What was the secret? Why did it make Rachel dump Andy at prom? Why did the secret make Andy repeat the same mistake again so the whole school found out? You will never know the secret of Melinda's until you read the book Speak. 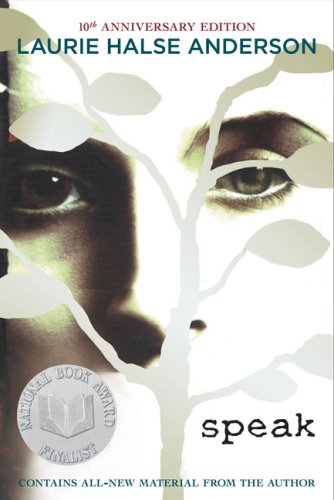