"We marines always began our battles at dawn. The Japanese, though, like the monster beings in our old stories, preferred to strike in the darkness."

Joseph Bruchac wrote Code Talker to bring about an understanding and appreciation for the crucial role that the Navajo Code Talkers played in helping the United States win the battles of the Pacific during World War II. The contributions of the Code Talkers were kept top secret until 1969, twenty-four years after the war ended, so many of the books written about World War II do not mention them. Their role was kept secret for national security reasons. If a war broke out with Russia, the U.S. Government wanted to be able to use the Navajo code again. Though the author is not Navajo, he is a Native American writer who believes that the Code Talkers' story is not as well known as it should be.

This book is a fictional narration by a former Navajo Code Talker, Ned Begay, as he tells his grandchildren about the events he took part in during the war. The story begins eight years before the war, when Kii Yázhí, a young Navajo boy, leaves his home on the Navajo reservation. At only six or seven years old, he is taken to a school for Navajos that is run by the government. The school's purpose is to Americanize the Navajo children by making them forget their culture and language and by teaching them the skills of the “white people”. Although his family wants Kii Yázhí to keep his Navajo culture, they realize that he must learn the language and the ways of the mainstream American people in order to have a promising future.

Through the story of Kii Yázhí, Bruchac shows the many critical changes and sacrifices the Navajo children are forced to make at the American school. They have to cut their traditionally long hair into a short military style cut, their Navajo clothes are taken away and replaced with military style clothes, and they are given an English name. Kii Yázhí's name is changed to Ned Begay. Even though these changes may not seem too radical to our society today, they were major changes to the traditions of the Navajos. Despite the efforts of the school, the Navajo children do not give up their culture, which shows that culture is embedded in every person and that people cannot easily be forced to give it up.


Ned Begay is in high school, where he excels in his studies, when the Japanese attack Pearl Harbor. Though Ned desires to join the Marines along with many other Navajos, the U.S. Government rejects them, saying that their English is not good enough. Ned gets the chance he dreamed of when the policy changes in 1942, as the government decides to use the Navajo language as the basis for their secret war code. The Navajo language was chosen because it is a language that is difficult to understand, it was not written, and fewer than 30 non-Navajo understood it. Ned joins the Marines and participates as a Code Talker. He and his division ultimately are successful in helping defeat the Japanese. Interestingly, Ned is proud to serve in the Marines even though he is helping the very government that oppressed the Navajo people and told him that his culture was worthless during his school days.


Sadly, in the end, the Navajos are not recognized as playing a major part in the war. Regardless of their important role in the victory, the promise of a new home and help getting a job that is given to all Marines who served is not offered to the Navajos. Not only was our government racist, but also many of the people who live around the Navajo reservations still discriminate against the Navajo Marines. When Ned, dressed in his Marine uniform is thrown out of a local bar after the war, he discovers that even though people in big cities may be very thankful for his service, not everybody feels that gratitude. At this moment, Ned realizes that just because the Navajo Marines played a critical role in the war, does not mean that the white people will respect the Navajos any more than they did before the war. Surprisingly, because the Navajo culture teaches their people to be humble, Ned does not react in anger to this mistreatment.


I found this book engaging because Bruchac's style of writing is exciting and interesting, I learned a lot about the battles in the Pacific, and I felt like an intimate observer of Ned's life from the beginning all the way until he ends up with the Marines fighting their way from island to island. Some of the battle scenes are so detailed and well-described that I felt as though I were participating in the fight: "A single scream, so loud and distorted that it didn't seem to come from a human throat, tore at the night. Shapes began hurtling out of the darkness amidst the flashing and crashing of weapons and the smell of gunpowder."

I recommend Code Talker to teens who would like to learn more about the war in the Pacific, especially landings, battles on the islands, and the secret code that helped to win the war. It is a fast-paced, suspenseful page-turner.


I certify that the above work is completely original. Cutter Jones 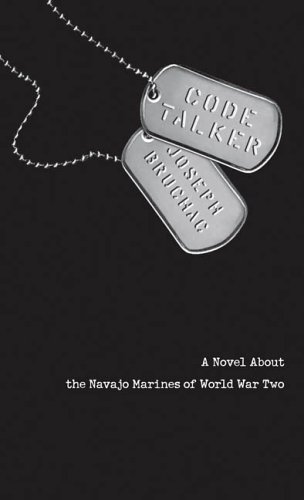