Empathy Out My Eyes | Teen Ink

Empathy Out My Eyes

Favorite Quote:
"The corners of the world our mere prologue."

For those who snort for a living, killing themselves for a quick buck,

For those with a depression so bad that they’ve reached fifty at the age of fifteen,

Eyes so puffy and they are blind, those who’ve realized the world doesn’t speak braille,

For those who have travelled down the same road so many times before,

Holding the keys to hell, the b**tards always decide their using them,

For those who can no longer remember what cuddling a bear feels like,

Childhood at the age of twenty safe in your arms as the toy army men march the streets,

White supremacy, swastikas from the craft store, and Facebook posts,

The toy soldiers bask in those and I wish to be a kid again,

For those who never stopped being a teenger, because life was just a little too hard,

For those with the brilliant minds, too brilliant and too dumb that they crave death,

For the mere price of your attendance, fondness, and art,

The world in which humour can be found in tragedy, and homosexuals like me roam free,

For those who have seen humans under the dim light,

Who know the smell of sick people and sorrow well,

For those who have found love in which everything is colourful and a joke,

But still see the skies as sickly and grey,

For those who cannot dismantle the workings of their lineage,

Sparks fly and leave a dark spot on everyone,

For those who are terrified of the looming threat of a million miles,

For those who felt the earth was four sizes too small, and gravity is unfortunately real,

For those with a wolf out their back, the teacher’s pet of false truths,

For those in the most mundane of realities, where everything is beige and navy,

Who’ve realized that life is a mad dog who will run in circles if you can’t tame it,

For those who have realized divinity is a simple word,

But hard for the tongue to say eloquently, too easily defined,

For those whom I loved but never got to see it,

For those who never got to and never will get to,

My heart, narcissistic in my conflict, cries empathy for.

And yells that in a dead world one must live in spite,

Merely for the satisfaction of p*ssing it off. 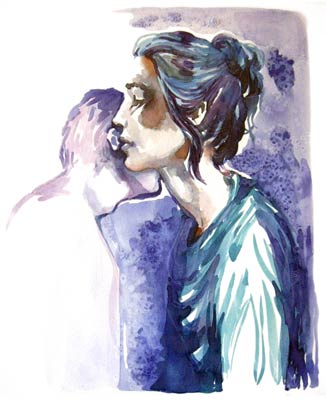 For those who have their own world against them.