Gender Discrimination in the Medical Field

In 1991, men were 328% more likely to become full-time professors than women were (Gender). Granted, it isn't 1991 anymore, but we discriminate very frequently, simply based on a person’s gender. We discriminate against women in health insurance, and wages, among other things, which creates a big imbalance towards the medical industry, as we blatantly favor men over women for little or no reason. Because of that discrimination, we have to try to make sure that the playing field is level for everyone, especially as doctors and insurance are necessary for everyone’s well-being. Furthermore, medical discrimination, or discrimination in the medical field, is highly prevalent, even though most of us may not realize it at first. Finally, this essay is introducing you to everyday gender discrimination, and what we can do about it.

Women currently are charged more for health-care almost all of the time. In 2014, there will be a new health care law, where maternity care will be part of women’s insurance, so that they don’t have to pay extra for it. Currently, it is an added expense that for some isn't affordable. Women have to pay more in over 90% of the health-care plans available, based on “using more services” (Pear), including “more likely to visit doctors, to get regular checkups, to take prescription drugs and to have certain chronic illnesses” (Pear). Instead, men who smoke regularly get to pay from 10 to 50 percent less than a nonsmoking woman of the same age does (for health insurance).


Although health-care bills are preventing discrimination against women, they don’t have very clear or measurable guidelines, so the companies and individuals can still discriminate based on a person’s gender. American Health Insurance Plans is trying to stop rating and increased rates by gender. “A 25-year-old woman, for example, could be charged anywhere from 6 to 45 percent more than a 25-year-old man” (Kliff). In 1994, women’s rates were up to 150% more than men’s for health-care (Kliff). In conclusion, men can buy health care for a lot less, just because of their gender.

Men and women should get paid the same amount if they’re doing the same job. For example, “Women's median income was 27% less than men's in family practice, 29% less in pediatrics in 1991” (Gender). Women earn approximately 10-25 % less than men do. They are also discriminated against a lot because of their gender: “55.8% of women vs. 2.1% of men felt that career progress had been delayed due to sex discrimination” (Gender). Title IX and Title VII supposedly protects women from being discriminated against because of their gender, but they aren't actively followed-through with (so men can discriminate against women as much as they want). Also, women often get stereotyped and catalogued, which their male colleagues do not (Gender). Some men are discriminated against because of their sexual orientation, but the women were still discriminated against a great deal more. “74.8% [of women] reported having experienced an incident of sexual harassment at some point in their careers” (Gender), mostly by their male colleagues. In addition, more than 75 percent of the women who were harassed didn't report it, because there wasn’t a good way to do so, they thought it would reflect badly, or they thought it wouldn’t change anything. Therefore, men have a leg up, and the power to harass or discriminate against any woman.

Women aren't very well represented in the medical field. People don’t like articles as much if they’re written by women. Additionally, sometimes people think the women on staff are inferior, so it’s probably not a good place for patients (Gender). Very few women serve as mentors, so most of the women in the medical world don’t get the mentor-ship needed to get higher jobs. Women mentors also show how to have a family and be a doctor, et cetera, which most men in the medical world do not devote much time to. Therefore, women aren’t promoted very much, because they aren't able to get the training and funding they need to be able to publish articles. The more women there are who have higher-ranking jobs, the more medical research will be done that is beneficial and relevant to them. To advance, women need to be represented professionally in the medical industry.

We, as a population, need to stop gender discrimination in the medical field. Consequently, here are some ideas of how to successfully eliminate it. A good start would be physicians giving out teaching and clinical responsibilities equally, to both men and women (AMA). People shouldn't be biased against women. Therefore, to stop discrimination, medical magazine editors should do gender-blind casting for articles, research responsibilities and such in medical magazines. At some places, the article casting is gender-blind, which helps women advance. Also, we need to have policies and strict enforcements against sexual harassment. Medical centers and hospitals should be gender and culture classes to educate all of the medical staff on how to work as a team, without harassment and belittlement. Lastly, we should make sure that men and women have the same rights in the medical industry.

Gender discrimination is an immense problem in our society. Although it is present in other jobs, it is especially noticeable in the medical industry. Women get faced with discrimination, from paying more for healthcare to being paid less at their job as a doctor, every day. If we are to be a functioning society, we need to care and stop discrimination. Even though insurance companies favor men while making excuses, and while hospitals prefer men as well, the public should know the truth. We need to know what is going on behind closed doors, and how to stop it. Finally, we need to stop discriminating against women, so we can say that we are a more equal nation. 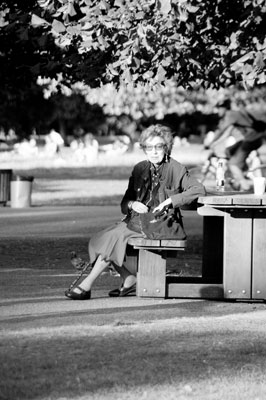 The author's comments:
We were doing a compare-and-contrast paper in my eighth-grade English class. I wanted to do something about gender discrimination, while everyone else was doing Adidas vs. Nike, or some variation on that theme. I stuck with my idea, and this is the final product.
Post a comment
Submit your own

Favorite Quote:
"Jealousy is a tiger that tears not only its prey but also its own raging heart."